Activists participate in the International Day Against Homophobia, Transphobia and Biphobia in Bangkok in May 2019: Thailand's LGBTQ movement needs to offer a more unified message.   © Reuters
CopyCopied

Whenever I talk to foreign journalists or friends from abroad about life for lesbian, gay, bisexual and transgender people in Thailand, they often say the same thing: that among international tourist destinations, Thailand has been recognized for decades as an LGBTQ paradise.

I keep having to explain that Thailand's laws are still too outdated to justify the use of the word "paradise." LGBTQ people face many disadvantages in their daily lives compared to heterosexual or cisgender men and women. Cisgender means people whose gender identity matches the one they were assigned at birth. Bullying and other forms of discrimination are all too common in our schools and workplaces.

Last week Thailand took a big step forward when the cabinet led by Prime Minister Prayuth Chan-ocha approved a draft bill creating same-sex unions with many of the same benefits as heterosexual marriages. The cabinet also approved an amendment to the civil code allowing marriage between "two persons" instead of "male and female" partners.

Set for debate in parliament as early as next month, the passage of the bill would make Thailand the second country in Asia after Taiwan to allow the registration of same-sex partnerships. An important step forward, the bill looks likely to be approved. The big risk is that divisions within the LGBTQ movement could allow conservatives opposed to legalizing same-sex unions to delay or even derail the bill entirely.

The draft bill has its flaws. It avoids the use of the word "marriage" for same-sex couples and it limits some rights. For example, the same-sex partner of a public servant who died would be ineligible to receive the same government pension and financial benefits allowed to a widowed spouse in a heterosexual marriage.

While this bill does not end the fight for equality, it will help to lower resistance among the general public to granting more rights to LGBTQ people and reduce fear and prejudice among conservative and religious groups.

Winning over the general public is one thing. Another challenge for the LGBTQ community is to resolve internal conflicts. While many see allowing the registration of same-sex partnerships as an important first step, other groups such as the Moving Forward Party are demanding nothing less than fully equal marriage rights for LGBTQ people.

If this kind of political infighting is allowed to fester, I fear it could create an opening for groups opposed to same-sex unions to halt the passage of the bill through parliament. Thailand's LGBTQ movement needs to offer a more unified message.

Only a few days after the government announced the draft bill, a conservative group called Muslims for Peace released a statement claiming the bill was immoral and would create chaos in Thai society.

Buddhist and Christian networks are yet to respond, but I am afraid that before the bill is debated in parliament, we will see more and more objections being raised. I believe that now is the time for Thailand's vast human rights and gender rights advocacy networks to explain the benefits of the bill.

I am often asked that with the coronavirus crisis inflicting so much damage to our tourist industry and our economy in general, are there not more urgent issues facing Thailand? The truth is that getting to this point has taken 20 years. For the 7 million Thais who identify as LGBTQ, this is an urgent economic issue. 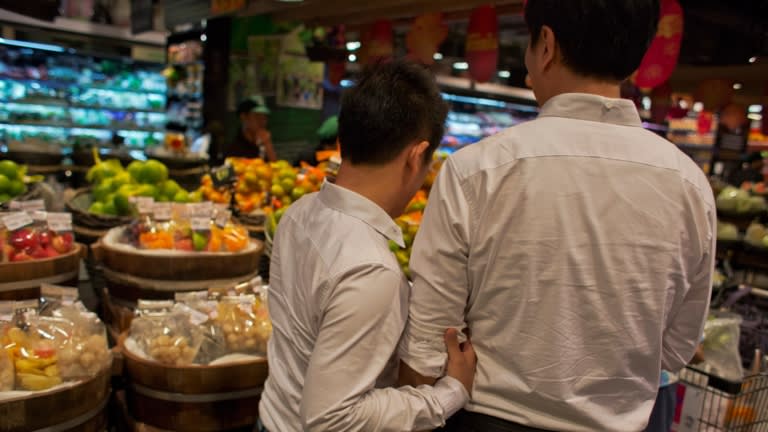 LGBTQ people face many disadvantages in their daily lives.   © Reuters

More stable economic lives for LGBTQ people are certain to boost the wider economy as well, increasing Thailand's attractiveness as a tourism destination in the U.S., Europe and other countries where equality by gender and sexuality has been long accepted.

Gay, lesbian, bisexual and transgender tourists can now fall in love with a Thai partner knowing that they will be able to register their same-sex partnership, plan a life here and start contributing to the economy.

Although the current parliament includes many conservative members and senators, I have had positive discussions with politicians and I am confident that this bill will be signed into law before the end of this year.

Recognizing same-sex unions for LGBTQ people in Thailand is just one step in the larger battle for equality. The day will come when same-sex marriage is recognized equally under the law as heterosexual marriage.

Perhaps the time will also come when we will see a gender recognition law allowing transgender people to change their identity in line with their current gender status. As a transgender woman, I would much rather be able to change my identity to "Miss" before being able to register a partnership or a marriage with a "Mister." We still have a long way to go.

In my experience, moments like this can make LGBTQ people seem as if we are shouting only for ourselves, creating a backlash. My role is to explain that steps forward like this include everyone. In every family, there is always the chance that some people will identify as LGBTQ. Why compel them to a life of depression and misery, unable to openly express their true selves?