When it comes to the king, young Thais have lost their religion 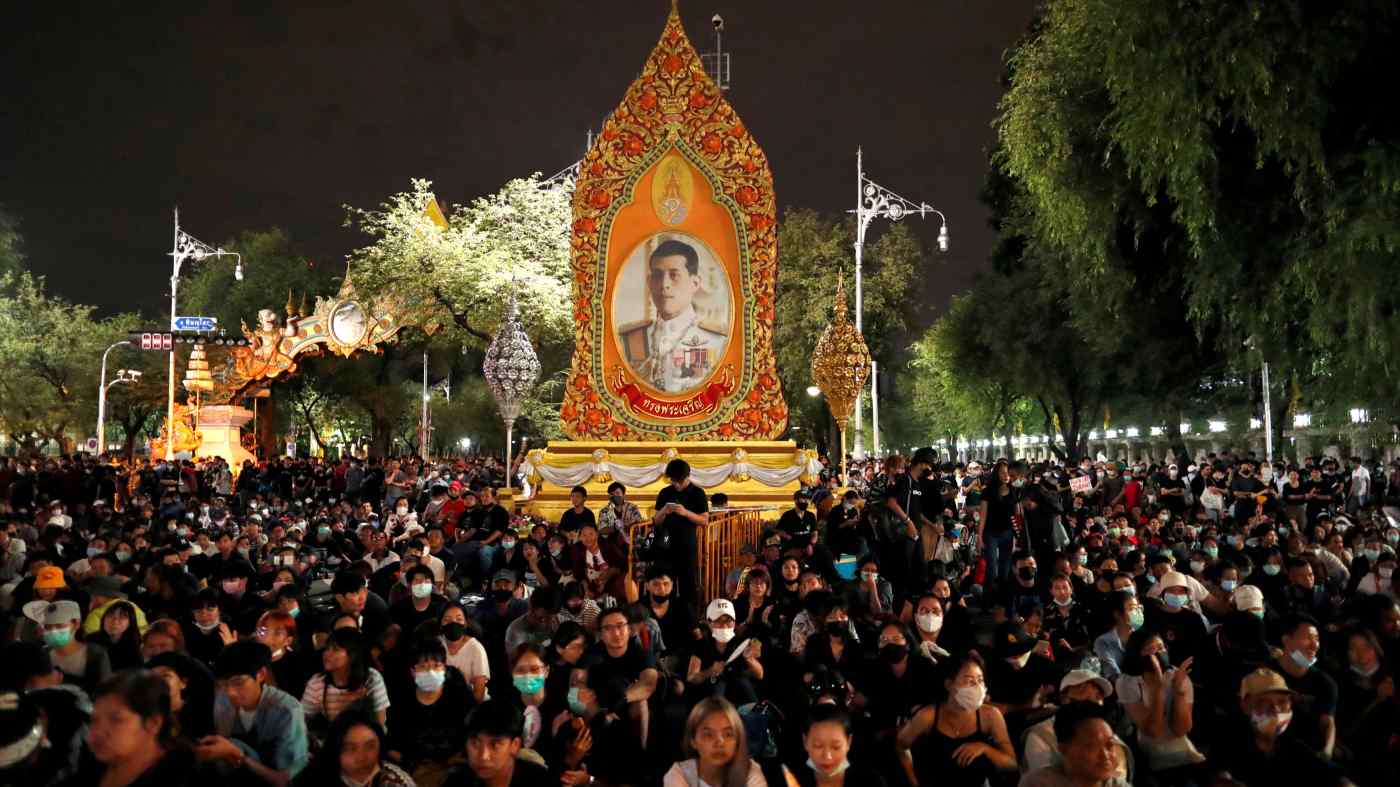 Pro-democracy demonstrators gather outside the Government House on Oct. 14: the threat from the current protest movement is not so much a hammer as a flow of water.    © Reuters
CopyCopied

Sunisa Manning was born and raised in Bangkok by Thai and American parents. Her debut novel, "A Good True Thai," is about Thailand's 1970s democracy movement.

The king of Thailand is untouchable. Thais love to delineate insiders and outsiders, and most often it is regard for the monarchy that is the line of demarcation. More than Buddhism, worship of the monarch is our religion. But amid intensifying protests, the question is: Are Thais losing their religion?

Reverence for the monarch, which is the definition of what it is to be Thai, is learned, and the state goes to great pains to instill it. The wall surrounding the monarchy is high and strong, but it was breached in 1932 when absolute monarchy was transitioned into a constitutional monarchy. Slowly, though, this move was eroded.

By the 1970s the military and the palace had succeeded in installing such reverence towards King Bhumibol Adulyadej, who died in 2016, that he had more power than a constitutional monarch, which he remained in name. The deception allowed Thais to claim that the king was just like the British queen, when in reality he was an active political player who could, and often did, influence the way events played out.

The last time the wall around the monarchy was touched was in 2010 when Red Shirts occupied parts of the capital and, among other shows of defiance, daubed much anti-monarchy graffiti.

But it is 1976 that most people will remember, when protesting students were accused of hanging the crown prince in effigy. On Oct. 6 that year, students were massacred at Thammasat University. It is not how many students died that is really the question. The rational mind wants to hide in statistics, and tidy the dead into neat little numbers. Ask parents what they think about that. If it is your child, the death of one student is unacceptable.

As a mother, the thought of losing my son, who is a toddler, on the field of Sanam Luang, next to the university, makes me shake. But what is really at issue is how the young people died. Students were dismembered, lynched, stabbed and burned. The brutality was the direct result of trying to breach that wall -- calling into question whether the love of the monarch is the thing that makes us Thai.

I am thinking about this now because on Oct. 14 this year, the same day that the pro-democracy movement gained momentum, I published a novel about the student movement of the 1970s. A Good True Thai was a way for me to have an argument about what makes up our country. It follows three characters, Det, Lek and Chang, who become radicalized but have different ideas about how to make Thailand more inclusive.

Students are protesting today. Tens of thousands are taking a hammer to the wall. Among other things, they have called for reform of the monarchy, asking, essentially, for King Maha Vajiralongkorn to become a real constitutional monarch. This comes at a time when the king has consolidated many of the crown's financial and real estate assets, bringing Thailand's sovereign wealth under his personal control.

Suddenly, there is a lot of interest in the events of the 1970s. In the six years it took me to write my book, my obsession seemed esoteric. Even the activists I interviewed were surprised at my interest. They were convinced that no one wanted to hear their story. The Oct. 6 massacre, especially, has been subject to what the scholar and former student activist Thongchai Winichakul calls "unforgetting." Unforgetting is an active state of silencing, like a memorial in negative, a charge so fraught that it is part of what drew me to writing about the period in the first place. A captured and wounded student is taken by police to an ambulance in Bangkok on Oct. 6, 1976: unforgetting is an active state of silencing.   © AP

Now I am getting questions about how I knew that the events of the 1970s, when students stood up for change, would come again. I didn't know -- I couldn't have. The timing is uncanny. Sometimes it feels as though the universe is dancing with me. But if you inquire into why Thailand is such an unequal country, the conclusion, if you are honest, is that such inequality is untenable. I did not predict this moment, but I do believe that the uprising will come again and again, as long as regular people can't find jobs that allow them to take care of their families without relying on connections to the right people.

The government of Prime Minister Prayuth Chan-ocha has reacted to the student movement with predictable and patronizing bewilderment. They cannot understand why young people would be "disobedient" to their elders -- i.e., the government -- or the father of the nation -- i.e., the king. All students of Thai history are scared that the next step will be bloodshed. That is what happened in 1976, and it is what is on the docket today as King Vajiralongkorn and Prayuth's military government weigh how much humiliation they can endure, as they probably see it, against the reputational damage that would follow from opening fire on unarmed protestors who sit down and sing songs to make clear that they are peaceful. The students are playing their cards with savvy. And social media brings more eyes to the arena -- more eyes than the students got in 1976.

What I do see is that the idea of the kingdom is punctured. Young Thais have lost their religion. They can no longer stomach the hypocrisy evident in many of the ideas handed down from above. Through social media, I saw a sign held by a protestor that asked why, if Thailand's education is so good, members of the elite send their children to college abroad. That made me laugh. Much of the elite does not even send its children to high school in the kingdom. Thais are told that the king is a Dharmaraja, a benevolent Buddhist ruler. We also read that he spends much of his time in a rented property in Germany with his chief consort in close proximity.

Belief in the monarchy is sustained by precisely that -- belief. When you lose the youth, you've lost the future of the myth. If devotion to the monarch is the wall that divides insiders from outsiders, the threat from the current protest movement is not so much a hammer as a flow of water. Through the #MilkTeaAlliance, a coalition of activists has taken root in the region. Thais have been told by Hong Kong demonstrators to "be water."

One thing about water is its flexibility. Water washes in and recedes. Try to contain it, and more water splashes over the walls. Water is implacable. It may not be this wave that succeeds, but no one can argue with the force of the ocean.