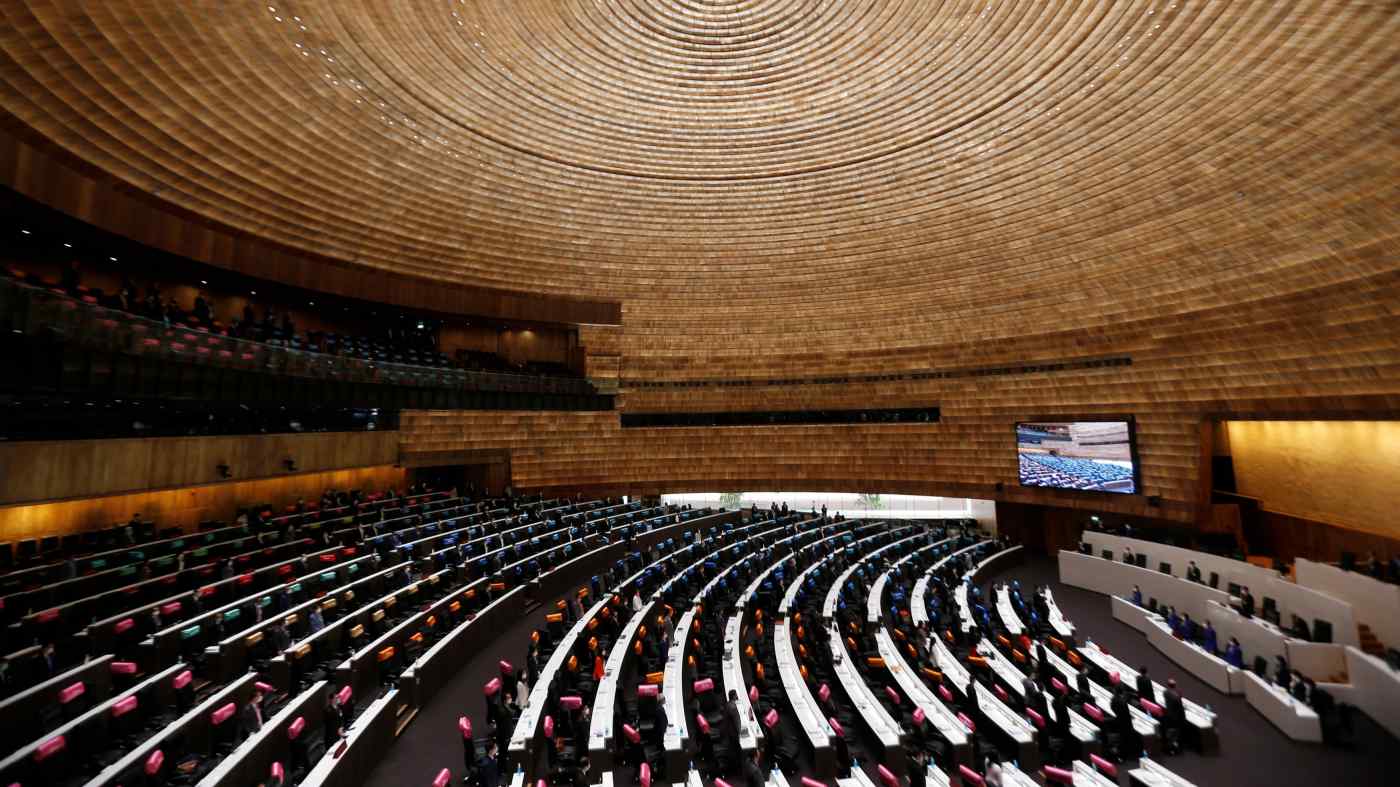 Thailand's parliament meeting hall: no one at the helm to navigate huge economic challenges.   © Sipa/AP
CopyCopied

Last week, the government's entire economic team resigned, with departures by the ministers of finance, energy and innovation, as well as Deputy Prime Minister Somkid Jatusripitak, the veteran technocrat charged with efforts to save more than 10 million jobs at risk from COVID-19.

The exodus seemed partly performance based. Thailand's economy is expected to shrink 8.1% this year, putting it on track to become Southeast Asia's worst performer just as Prime Minister Prayuth Chan-ocha's cabinet celebrates its anniversary. The reshuffle, though, is "more about political consolidation than formulating new ways of thinking about economic policy," says Bob Herrera-Lim from Teneo Research.

This makes the timing all the more damaging, with no one at the helm to navigate four huge economic challenges: coronavirus-related shocks to domestic demand and tourism; a stubbornly strong currency; crushing household debt; and near-zero interest rates that leave scant policy latitude.

As fate would have it, the Bank of Thailand is facing a power vacuum of its own as it is currently in the process of replacing Governor Veerathai Santiprabhob. So, the fiscal, monetary and strategic functions in Bangkok are basically on hold pending political wrangling over replacements.

The bigger worry, though, is that Thailand will just be putting new names and faces on the same old policies of a military-junta-turned-elected government.

Take the unemployment problem confronting Thailand's 69 million people. Official data mask a huge gray economy. According to an April 28 World Bank report, more than half of Thai workers are "informal, meaning they are not covered by a social security scheme and are particularly vulnerable." 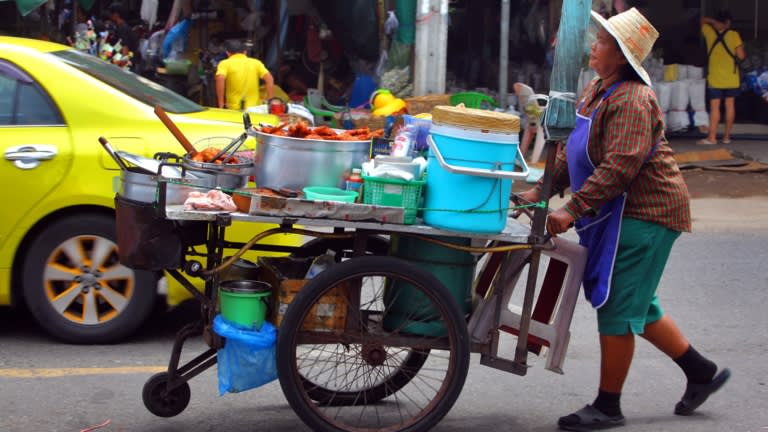 A Thai vendor pushes her food cart in Bangkok: more than half of Thai workers are informal and not covered by a social security scheme.   © Getty Images

Prayuth's cabinet has so far thrown about $60 billion of stimulus at the economy to offset falling exports and tourist arrivals. What is really needed is a wholesale change in strategy to raise competitiveness and living standards. Yet there appears to be little movement afoot.

Prayuth, a former general who was formally elected in June 2019, but has held the top job since May 2014 when he grabbed power in a military coup. Prayuth and his political foot soldiers have rolled out their fair share of bold decrees. First came a giant $45 billion infrastructure plan, then there was the Thailand 4.0 reinvention campaign aimed at encouraging greater innovation, boosting productivity and moving the country up the value-added ladder.

Yet implementation has been glacial, especially for a government led by generals used to getting to their own way. Juntas, remember, usually grab power from underperforming leaders in order to restore calm and get big things done.

Prayuth's team has certainly achieved the former. Between the previous coup in 2006 and 2014, Bangkok churned through eight leaders, each more hapless than the last. The capital saw more giant protests than even Hong Kong. Yet Prayuth and his men have little else to show.

Order has its place in reassuring multinational companies like Toyota Motor and General Motors with plants in Thailand. More is needed in a region where other countries are clamoring to attract factories leaving China. Neighbors like Indonesia, Malaysia and the Philippines, meantime, are working hard at producing tech unicorns.

While the Bangkok media obsess over who will now lead the charge, the impact of the COVID-19 pandemic means Prayuth's new economic team will be facing the worst downturn since the 1997 Asian Financial Crisis. Being overseen by a top-down crowd more interested in keeping the peace and quashing dissent than reforming the economy won't help either.

A key priority must be diversifying the economy away from exports and tourism, which together generate 70% of gross domestic product. That requires a battery of tax incentives and regulatory changes to favor startups in the services sector.

Reducing bureaucracy is vital to making Bangkok a more attractive base for overseas entrepreneurs looking to create the next Grab, fintech company or e-commerce platform. That means building a more vibrant and flexible ecosystem for innovators.

As Asian growth becomes more about ideas than low-wage labor, Bangkok must invest exponentially more into education and training, and move beyond rote learning to championing critical thinking and problem solving.

Corruption remains a problem, one that has grown worse since 2014. On Prayuth's watch, Bangkok has fallen 16 rungs on Transparency International's corruption index to 101st. Disappointing, as runaway graft was among the junta's top reasons for seizing power.

No surprise then that the extreme concentration of growth among elites is increasing. The World Bank says Thailand needs "around two years" to return to its pre-COVID-19 growth rate of 2.8%, assuming Thailand can avoid another coronavirus lockdown, and that neither the U.S., China nor Japan stumbles badly heading into 2021.

Either way, 2020 has already seriously damaged Thailand's odds of beating the middle-income trap, where per capita income stalls at around $10,000. Thailand's is roughly $7,800.

As Prayuth assembles a new team, it might be wise to think back to the big changes he envisioned in 2014 -- and fire away before it is too late.