Thailand's teamwork will make a difference

Path to democracy has had its challenges Thailand's parliament during a special session to discuss the ongoing protests in October 2020: the most appropriate course of action is for the parliament to take the lead.   © Reuters
CopyCopied

Tanee Sangrat is spokesperson for Thailand's Ministry of Foreign Affairs.

Thailand's increasingly contentious politics in recent months has posed a big question on how things will unfold. However, its record has shown that the country is resilient enough to emerge stronger and wiser from such difficult times.

This time, the protesters have made clear demands in calling for the resignation of the Prime Minister, the amendment of the constitution and the reform of the monarchy. They have also urged the government to swiftly address many chronic problems the country has been grappling with, such as inequality.

Thailand's path of democracy has had its challenges. Like many other countries, there have been ups and downs. However, we have always tried earnestly to address problems faced, while increasing public participation from all walks of life.

Politics is the art of the possible, given the various demands and constraints faced. Democracy enables us to achieve that goal with accountability and inclusivity within an agreed system and mechanism, through dialogues and engagement with stakeholders. Such efforts take time, requiring the participation, understanding and cooperation of all sides. The key is to have all voices heard, while not infringing upon the rights of others. The ongoing protests reflect that many are not content with the status quo. They want their demands met, regardless of the ensuing consequences upon others who may not share their views.

Some observers note that this is a clash between generations. Others comment that both sides seem to have no end point of convergence. What is perhaps more important is that we seek what we have in common rather than stress on our disagreements. Differences will always remain, but they will be respected while maintaining dialogue. In this process, listening to each other is key. The government might not be able to accommodate all proposals made by every stakeholder, but at least it will listen and do its best to meet realistic and constructive demands that reflect the wishes of the majority, while bearing in mind the concerns of the minority. 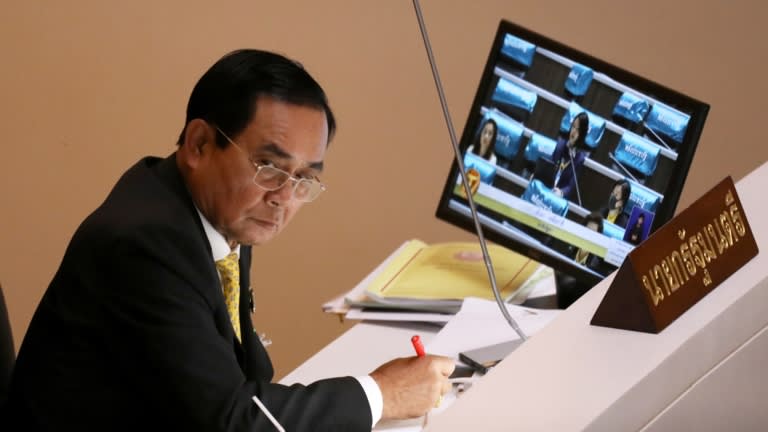 Prime Minister Prayuth Chan-ocha attends a special parliament session: the government will do its best to meet constructive demands that reflect the wishes of the majority.   © Reuters

Since July 2020, the government has allowed several public gatherings to take place around the country so that the protesters may express their concerns. And despite the declaration of a serious emergency situation over a few days forbidding assemblies of more than five persons, the authorities exercised utmost flexibility and restraint in allowing the protests to proceed.

Many of the protesters' aspirations are not new, including calls to reduce social inequality and to improve the state's social welfare system. These are issues shared by the general public as well as successive governments. Over the past four decades, Thailand has made remarkable progress in moving from a low income to an upper middle-income country. Its ongoing efforts to strengthen the nation's social immune system against economic and social shocks through the Sufficiency Economy Philosophy, and universal health coverage, among others, have been internationally recognized. This was not achieved overnight but through hard work and perseverance taking several years if not decades.

While the government respects freedom of expression, it has to ensure that the exercise of these rights does not infringe upon the privacy, dignity and safety of others. Anyone can advocate their viewpoints and articulate their dreams. But issues that potentially have far-reaching implications require careful consideration and debate with a view to reaching a consensus from all concerned.

Given the current situation, the most appropriate course of action is for the parliament, where interests across the political spectrum are represented by their elected MPs, to take the lead. In October, 2020, an extraordinary session of parliament was convened to discuss the various demands made and possible ways of moving the country forward. A reconciliation committee was subsequently formed, tasked with exploring all possible avenues to break the political impasse. The protesters have been invited to be part of the committee but the offer was regrettably declined. At the same time, the procedure for amending the constitution is progressing in parallel with the submission to parliament of a draft bill for a national referendum.

The demands of the protesters are political by nature and can thus be dealt with by the democratic institutions and frameworks designed to resolve such issues. It would be wrong to involve the monarchy which is above politics. The monarchy does possess moral authority built on mutual trust and respect between the institution and the people. This moral authority is so deeply recognized and revered that some political factions have tried to take advantage from it for their own gains. This must be avoided.

What is necessary now is for parliament, representing the people, to discharge its duties and responsibilities and achieve a solution that is acceptable to all. Stakeholders across the political spectrum have to listen to others, join the process, be realistic and sort out their differences through dialogue and compromise. This may take time, but it will be the only way to achieve an outcome that is meaningful and sustainable, thus ensuring that Thailand continues to move forward, leaving no one behind.