Washington and Tokyo must engage Beijing while checking irresponsible behavior 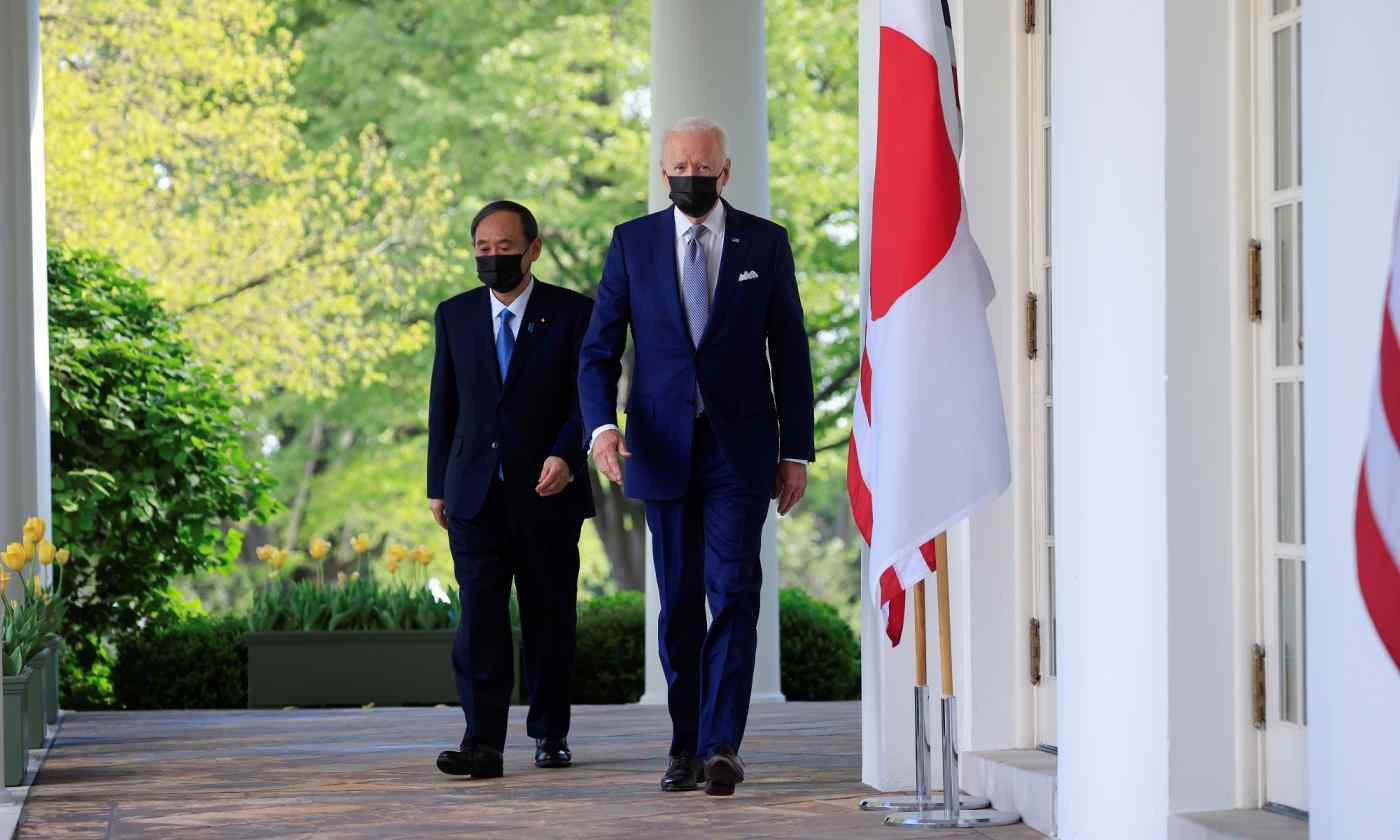 In their first in-person meeting, Japanese Prime Minister Yoshihide Suga and U.S. President Joe Biden confirmed the two countries would collaborate on a wide range of issues, from security and economy to technology and climate change.

Japan and the U.S. stressed they would uphold values such as democracy and human rights and would deepen their alliance to address China's attempt to challenge the rules-based international order.

We hope the two countries will steadily flesh out their agreement, turning it into a road map for resolving global issues and ensuring stability and development in the Asia-Pacific.

Biden, who took office in January, chose Suga for his first face-to-face meeting with a foreign leader. The Biden administration has rushed to rebuild ties with friends and allies that were strained under the administration of former President Donald Trump, and it has given top priority to working with Japan.

All eyes are on China. Washington views Beijing as the only competitor capable of altering the U.S.-led international order, and regards their conflict as a struggle between democracy and authoritarianism.

Countering a stronger and more confident China has become increasingly difficult for the U.S., especially if Washington has to shoulder the burden alone. It is thus a natural strategic choice for the U.S. to strengthen ties with Japan -- an Asian power near China that shares the same values as the U.S.

The focus of the Japan-U.S. summit was security. The joint statement highlighted "the importance of peace and stability across the Taiwan Strait." The leaders also reaffirmed that Article 5 of the Japan-U.S. Security Treaty, which obliges the U.S. to defend territories under Japanese administrative control, applies to the Senkaku Islands.

The application of Article 5 had already been confirmed at the "two-plus-two" ministerial talks, but both countries recognized the need to send a stronger message to China at the leaders level.

China has been heightening tensions with its provocative actions, such as flying fighter jets into Taiwan's air defense identification zone and intruding into Japan's territorial waters around the Senkaku Islands with China Coast Guard vessels. These moves could lead to unforeseen developments. Beijing should take the concerns of the international community seriously and change its behavior.

From Washington's point of view, the Senkakus and Taiwan are close neighbors and tied to issues that extend to the South China Sea. Japan cannot avoid doing its part to enhance deterrence.

Suga informed Biden of his intention to strengthen Japan's defense capability. Tokyo needs to carefully calibrate with Washington the degree to which it will take on this role and firm up its preparations while gaining the understanding of the Japanese people.

The leaders also confirmed the two countries would cooperate in developing emerging technologies, ensuring the safety of fifth-generation telecommunications networks, and establishing supply chains for semiconductors and other goods. Emerging technologies are becoming more integrated with security, and here too China and the U.S. are locked in competition. Fueling this is the global semiconductor shortage and the fact that Taiwan, under constant threat from China, is the world's largest producer.

It is important that Japan and the U.S. strengthen their cooperation in these areas for both economic and security reasons. Policymakers should develop a framework for cooperation that is beneficial to companies and research institutions on both sides and does not undermine competition.

Japan and the U.S. also expressed "serious concern" about China's crackdowns in Hong Kong and Xinjiang. Unlike Europe or the U.S., Japan has not imposed sanctions over these issues. However, Washington appears to have prioritized staying in lockstep with Tokyo.

Some have called the confrontation between China and the U.S. the "new Cold War." However, unlike the Soviet Union during the Cold War, China's economic influence is large and far-reaching. China is Japan's largest trading partner, making it difficult for Tokyo to economically decouple from Beijing. Many other Asian countries also do not want to be forced to choose between China and the U.S.

The national interests of Japan and the U.S. do not always overlap. The Suga government must look out for Japan's own interests, asserting them strongly as needed, while recognizing that a division of roles between Japan and the U.S. will be effective.

The joint statement also noted "the need to work with China on areas of common interest," such as combating the new coronavirus and climate change. Despite the difficulties, Tokyo and Washington have no choice but to explore the narrow path of balancing competition and cooperation with Beijing.