Japan can serve as bridge in weapons reduction talks 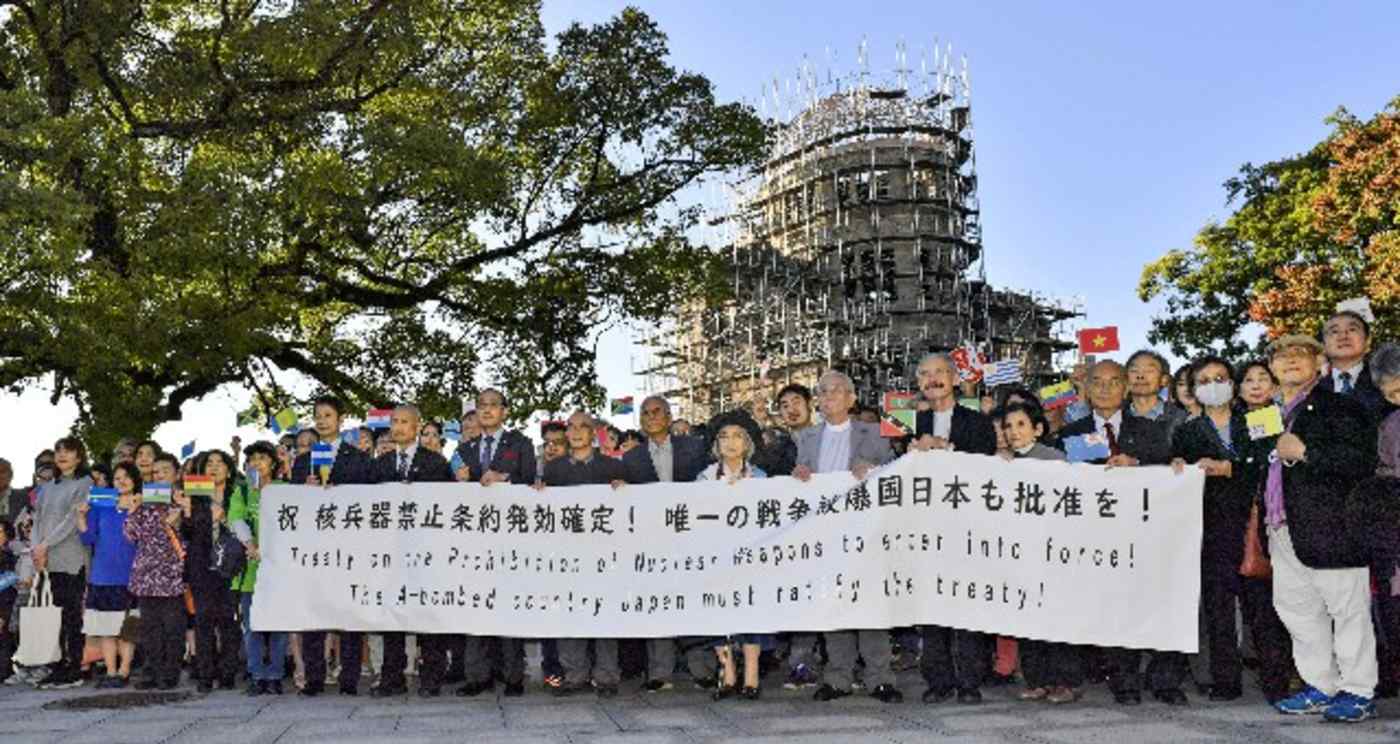 People show their support for the Treaty on the Prohibition of Nuclear Weapons in Hiroshima, Japan, on Oct. 25.   © Kyodo
October 29, 2020 14:12 JST | Japan
CopyCopied

A multilateral treaty banning the development, possession and use of nuclear weapons to bring about their complete elimination will enter into force on Jan. 22 next year.

Because the U.S., Russia, China and other nuclear-armed powers have refused to sign the Treaty on the Prohibition of Nuclear Weapons, the actual impact of the accord will be limited. Still, the nuclear powers should not underestimate the fact that an international norm to outlaw nuclear arms will be created.

Against this backdrop, it is now more important than ever for Japan to carry out its self-appointed mission of serving as a bridge between the nuclear powers and non-nuclear countries to prevent the gulf between them from widening.

The nuclear powers have rejected the treaty as being unrealistic. The U.S., the U.K. and France have argued that the accord "offers no solution to the grave threat posed by North Korea's nuclear program, nor does it address other security challenges that make nuclear deterrence necessary."

Japan has also opted out, saying it cannot deny the need for nuclear deterrence when it depends on the U.S. nuclear umbrella for its security. South Korea and Germany have adopted the same position, and India, Pakistan and North Korea have not joined the pact, either.

As the only country that has ever suffered nuclear attacks, however, Japan has a duty to keep reminding the world of the inhumane nature of nuclear arms.

To change, even if slightly, entrenched dependence on nuclear weapons, Japan should provide active policy support for arms reduction talks and the establishment of nuclear-weapons-free zones. The country needs to have more in-depth debate on what it can do to help bring the world closer to the ultimate goal of eliminating nuclear weapons.

This debate should include whether Japan should take part as an observer at conferences for the nuclear prohibition treaty. These meetings will be held regularly to discuss specific issues about the implementation of the accord. Komeito, the junior partner of the Liberal Democratic Party in Japan's ruling coalition, has already requested the government to let the country join the conferences as an observer.

In his address at the Hiroshima Peace Memorial Ceremony in August, then-Prime Minister Shinzo Abe said, "Japan will lead the international community's efforts to bring about a world free of nuclear weapons by serving as a mediator bridging the gap between countries with different standpoints."

If these words are not backed up with action, they are unlikely to resonate among survivors of the atomic bombings of Hiroshima and Nagasaki, let alone spur the world into action. Japanese Prime Minister Yoshihide Suga should map out a plan for how the country will contribute to the cause of a nuclear-weapons-free world, while pushing for participation in the conferences as an observer.

One nuclear arms-related international framework that involves nuclear powers is the Treaty on the Non-Proliferation of Nuclear Weapons (NPT). The parties to the treaty will meet next year to review implementation and compliance with the accord and seek agreement on steps to overcome new challenges. The review conference in 2015 ended without a consensus between the nuclear powers and non-nuclear nations.

If next year's conference fails as well, the NPT regime itself could fade into irrelevance. The world should acknowledge that a crisis is looming.