Myanmar military's use of force against civilians is unacceptable

Authorities must not repeat tragic 1988 crackdown that left thousands dead 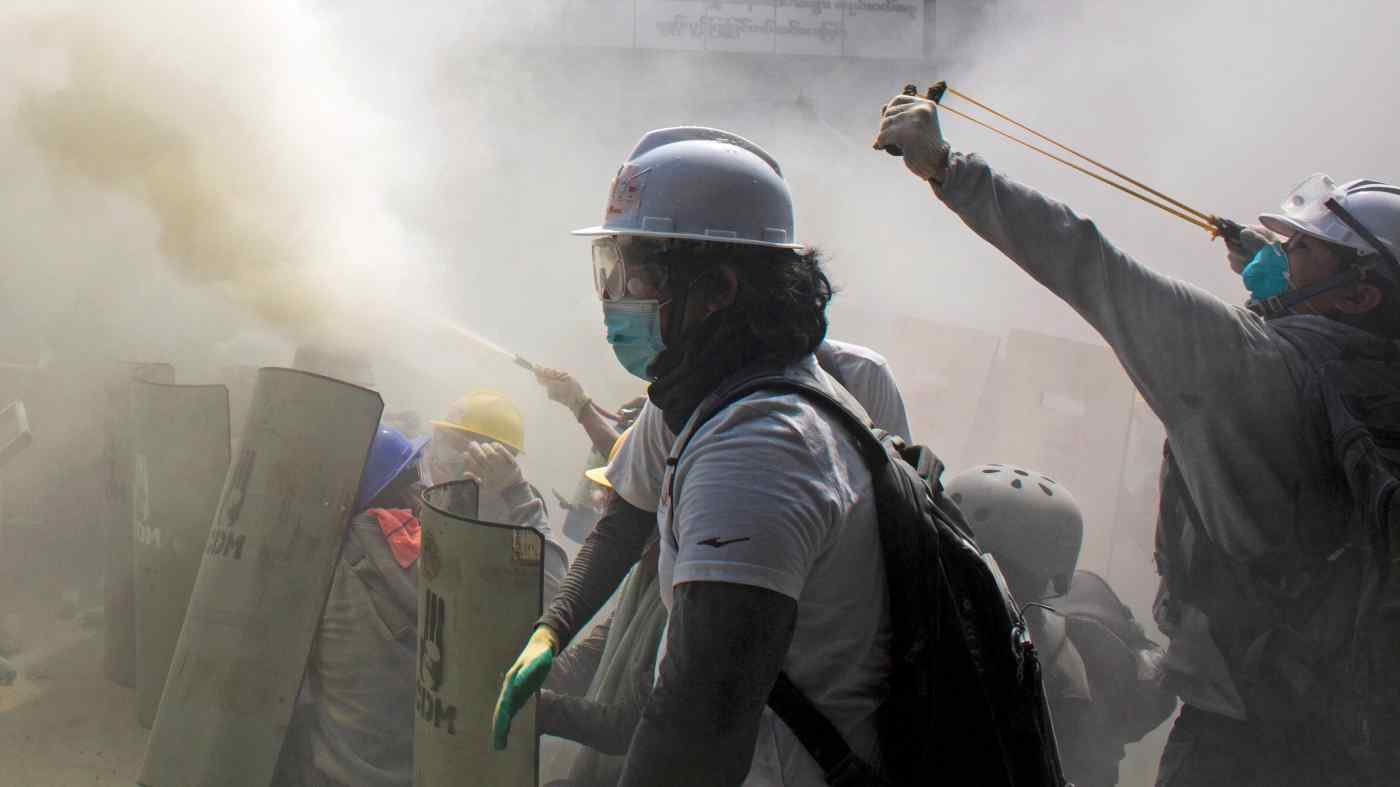 Protesters clash with riot police during a demonstration against the military coup in Yangon on Feb. 28.   © Reuters
March 3, 2021 13:30 JST | Myanmar
CopyCopied

One month after the Myanmar military seized power in a coup, the situation is becoming increasingly chaotic. Authorities opened fire on protesters, resulting in many casualties. The use of excessive force to silence citizens calling for a return to democracy is unacceptable.

According to the United Nations, at least 18 people were killed by gunfire and other means on Feb. 28. The first casualties were reported in Yangon, the country's largest city and home to many foreign companies and media outlets.

The military detained Aung San Suu Kyi on Feb. 1 and announced it was in full control of the country. Citizens, initially fearful of a crackdown, protested by banging metal utensils in their homes. They took to the streets to demand Suu Kyi's release after charges were filed against her and fears grew that her detention would be extended. As the demonstrations drag on, growing in scale, the security forces are becoming less hesitant to use force.

Senior Gen. Min Aung Hlaing, the top commander of the armed forces, has said authorities are using minimal force to deal with the protesters, but any bloodshed against nonviolent protests is unacceptable.

The military justified the political change by claiming that last November's general election, which was won overwhelmingly by Suu Kyi's National League for Democracy, was rigged. Officials seem to have thought the protests would subside if they promised to hold new elections. However, civil servants and others joined the "disobedience movement," in which people abandon their workplaces to join demonstrations, causing administrative and economic paralysis.

The scale of civil resistance has clearly exceeded the military's expectations.

If authorities use greater force to control the situation, more lives will be lost. When the military junta suppressed pro-democracy demonstrations in 1988, thousands of people were reportedly killed by indiscriminate gunfire. Such a tragedy must not be repeated.

The international community has a grave responsibility. The U.S. and Europe have imposed economic sanctions on Myanmar's military leaders and companies they control, but the effectiveness of these sanctions is questionable. If the military is to admit its mistake, dialogue and persuasion, rather than pressure alone, is necessary.

Foreign ministers of the Association of Southeast Asian Nations held an informal meeting with a representative of the junta on Tuesday via videoconference and pressed the junta to release Suu Kyi and refrain from using lethal force against the protesters.

Singapore's Foreign Minister Vivian Balakrishnan demanded that the junta ensure "there is no further violence and bloodshed," and called on ASEAN nations not to impose broad-based sanctions that will harm Myanmar's ordinary people. Indonesian Foreign Minister Retno Marsudi urged Myanmar to "open its doors" to the ASEAN bloc to resolve escalating tensions, while Malaysian counterpart Hishammuddin Hussein proposed that the bloc form an expert group on elections to provide "democratic support" to Myanmar in dealing with the junta's claim of election fraud.

Japan is one of Myanmar's major donors and has strong ties to the military, so its role is important. Chief Cabinet Secretary Katsunobu Kato condemned the armed crackdown, saying the use of guns was unacceptable, but tried to avoid alienating the regime.

Sovereignty must be returned to the people of Myanmar, and nations must push the junta to do so. To that end, sanctions such as freezing official development assistance should not be ruled out. But any sanction or policy of engagement is meaningful only if it can extract concessions from the military.