The new US nuclear policy is a step backwards

The White House protocol could undermine the Non-Proliferation Treaty

The administration of U.S. President Donald Trump has released its Nuclear Posture Review, which sets out the guiding principles of the country's nuclear strategy. The policy statement makes it clear that the government wants nuclear arms to play a greater role in defense, namely by relaxing the conditions for their use.

Though the policy is meant to enhance the nuclear deterrence capabilities of the U.S. and its allies, there are persistent concerns that it runs counter to the nuclear disarmament that the world should pursue.

The Trump administration's NPR represents a substantial revision to that released in 2010 by the administration of then-President Barack Obama, who appealed for a world without nuclear weapons.

Although the new NPR says the U.S. will only consider the use of nuclear weapons "only in the most extreme circumstances," it explicitly indicates the possibility of a nuclear response to counter even non-nuclear attacks. The policy also proposes the development of low-yield nuclear warheads that could be used in regional conflicts and on submarine-launched ballistic missiles.

The NPR refers to these measures as a way to cope flexibly with "new, growing 21st century threats." The document is particularly critical of Russia and China, both of which are aggressively modernizing and strengthening their nuclear capabilities, and North Korea, which continues its nuclear and missile development programs.

Certainly China and Russia, which do not hide their territorial ambitions, could potentially disrupt the international order by flaunting their status as nuclear superpowers -- and North Korea is a serious global menace as it threatens the international community with its nuclear bombs and missiles. 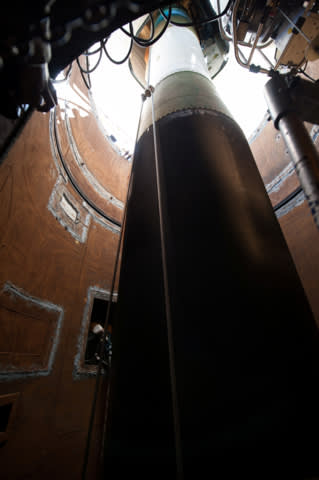 A U.S. Minuteman III missile at Vandenberg Air Force Base, in California

In this demanding global security environment, there is a compelling reason for the U.S. to retain a certain level of nuclear deterrence capabilities, which undeniably also serves the interests of allies such as Japan that are protected under the U.S. nuclear umbrella.

The worry is that the Trump administration's NPR could drive a global expansion in nuclear armament. China and Russia, in criticism of the new U.S. policy, could respond by further modernizing their nuclear capabilities.

Furthermore, if the U.S. moves to ease conditions for the use of nuclear arms and if the development of low-yield nuclear warheads were to bring so-called usable nukes closer to reality, more and more countries and militant groups could be tempted to pursue nuclear ambitions, much as North Korea is doing.

The Treaty on the Non-Proliferation of Nuclear Weapons inhibits the spread of atomic weapons beyond the five nuclear weapons states at the time of its inception -- the U.S., Russia, the U.K., France and China -- and calls on these nuclear powers to proceed in good faith with nuclear disarmament talks.

TIME TO ACT But nuclear disarmament has made little headway since the New Strategic Arms Reduction Treaty, or New START, entered into force in 2011 between the U.S. and Russia, which together hold more than 90% of the world's nuclear warheads. Moreover, Washington and Moscow are now censuring each other over alleged violations of the Intermediate-range Nuclear Forces Treaty concluded in 1987 between the U.S. and the now-defunct Soviet Union on the elimination of intermediate- and shorter-range missiles, putting even the pact's existence in jeopardy.

It can be said that America's new NPR reflects the nuclear powers' longtime inaction on nuclear disarmament. Now is the time for the U.S., Russia and China to take sincere steps toward nuclear arms reduction. If they continue to fail to do so, the NPT framework risks becoming more ineffectual.