Squeezed between Apple and Chinese rivals, South Korean giant must break out with innovations 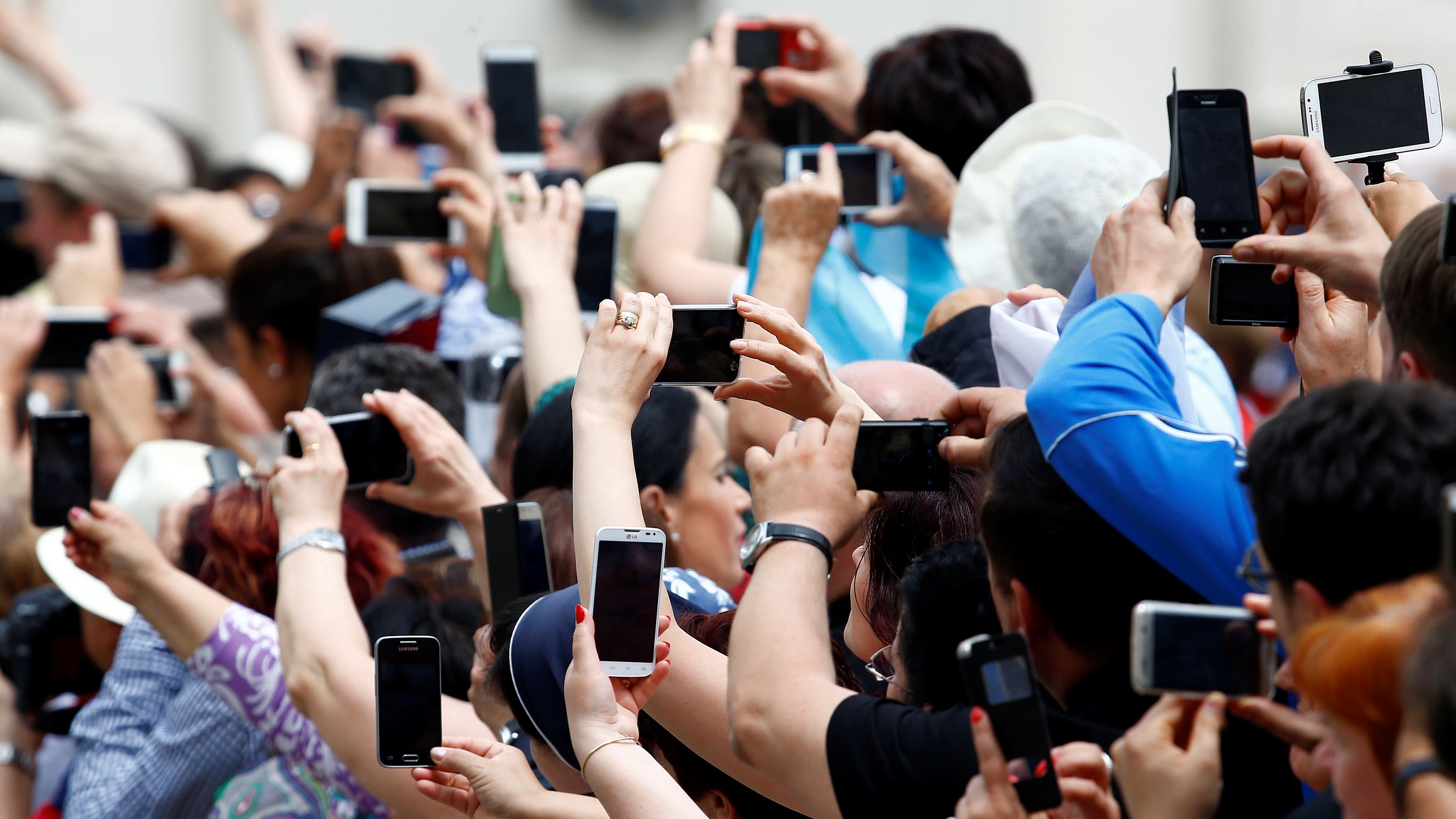 Samsung smartphones need to stand out from the pack.   © Reuters
CopyCopied

Eleven years on, Korea's biggest company is itself caught in the middle. On top side, there is Apple with its $1 trillion valuation and enviable pipeline of consumer favorites. On the bottom, cheaper Chinese brands are going global in a hurry and eating Samsung's lunch.

An increasing amount of the pressure is coming from below. Shenzhen-based Huawei Technologies nudged Apple into third place in the April-June quarter. While Samsung still leads in smartphones globally -- with a 20% share of shipments -- its presence in China is fading. In the second quarter, it won only 1% of the mainland market, a far cry from the two-digit share it once commanded.

At the same time, Chinese brands Huawei, Oppo, Vivo and Xiaomi are making inroads around Asia, and even encroaching on Samsung's share of consumers in the West. The trouble for Samsung is that China is no longer competing only on price, but on innovation and quality.

That is an ominous development for Apple, too. For years, the iPhone and Galaxy brands dominated a nearly $500 billion market. But Apple is at least generating growth from phone-based services, thanks in part to its iTunes eco-system. Its stock valuation continues to soar, and is up 37% over the last two months.

Meanwhile, Samsung Electronics' stock remained practically flat over the same period, as profits are dwindling. Net income of $9.8 billion in the three months ended in June fell short of analysts' estimates amid sluggish Galaxy sales. Heady demand for its memory chips failed to offset the deepening shortfall in smartphone shipments. 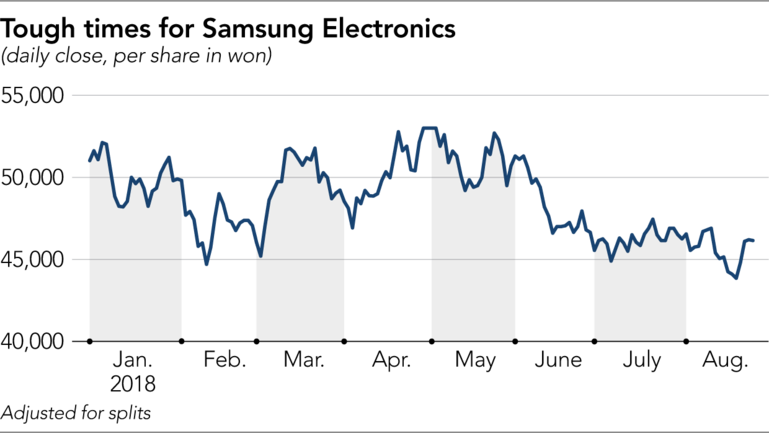 Worse is in prospect as mainland tech surges. A case in point: Huawei may be first to market with a foldable handset, a technology heir apparent Lee Jae-yong had pledged Samsung would rule.

Lee, 50, is the son of 76-year-old Lee Kun-hee. Since May 2014, Lee the elder has been hospitalized following a heart attack. And what a spectacularly event-rich period it has been. Earlier this year, Lee Jae-yong was released from prison after being convicted of corruption charges in August 2017. It was the same scandal that led to President Park Geun-hye's impeachment in March 2017. Samsung's exploding phone crisis in 2016 almost seemed to symbolize the company's plight.

Samsung's profit troubles could not come at a worse time. Lee Jae-yong had been hoping to harness the Galaxy line's spoils to transform Samsung from manufacturing giant to pioneering leader. He wants the nation's premier conglomerate to move upmarket into artificial intelligence, robotics, biopharmaceuticals, automotive electronics and other game-changing industries of tomorrow.

First, though, Chairman Lee's company must transcend the economic system from whence it came. They do not call Lee's nation "Republic of Samsung" for nothing. If Samsung loses its groove, so do the prospects of 51 million Koreans. Samsung alone generates nearly one-quarter of all tax revenues.

Samsung's challenges are a microcosm of Korea's. U.S. President Donald Trump's trade war gets some of the blame. But the bigger problem is that Korea Inc., like Samsung, is not raising its game.

Just as Samsung lacks a pipeline of disruptive products, the economy suffers from a dearth of new job-creating industries. In her four years as president, Park pledged to build a more "creative" growth model to replace one dominated by giant family-owned conglomerates like Samsung. Instead, she got co-opted and eventually arrested for bribery and influence peddling.

Since taking power in May 2017, her successor Moon Jae-in promised to carve out greater space for startups and small-to-medium enterprises. Reforms have been slow-going, though, as Moon focused more on detente with North Korea than lowering a 9.2% youth unemployment rate. Yet Moon also is finding Korea's conglomerate-heavy system stymying change.

These insular chaebol have long been enabled by a political system that deadens competitiveness. Modern-day Korea has too many aging Goliaths, too few would-be Davids to launch the next tech disruption. Even if that rare group of 30-something Koreans launches a startup, Samsung, Daewoo, Hyundai, LG, Lotte and other colossi can gobble up any possible competitors. Because size matters more than vision, Korea is better at making things than inventing them.

Part of Lee Jae-yong's dilemma is breaking with Korea Inc. conventions while finding his inner Steve Jobs, the former Apple guru he idolized. Lee should start by modernizing Samsung's governance structure, including dissolving a complex web of cross-holdings. Admittedly, that would dilute Lee family control over Samsung and its vast orbit of affiliates. Making Samsung more horizontal and meritocratic is the first step toward reinvention.

Lee Jae-yong and Samsung Electronics CEO Koh Dong-jin should accelerate the shift into AI and other, next-generation technologies. Earlier this month, Samsung said it will throw $22 billion at owning the future. It is all about the execution, though, and empowering in-house talent to think big and take risks.

Apple, remember, sued Samsung in 2011 for being a "copycat," a charge that reverberated through Korea Inc. True, Samsung has impressed technologists with its own designs and functions. But Korea's central chaebol has yet to launch a market-changing breakthrough.

If Lee the elder is running short of time, Lee the younger must rise to the challenge of simultaneously reshaping the group from the inside and responding better to the competition. The urgency is fast rising amid signs the market for smartphones and tablets has peaked. If Samsung cannot seize the moment with new products, others will.

Korea's government needs to do the same, of course. As Japan rekindles its animal spirits and China grows market share, Seoul must rely more on new ideas and inventions than riding Silicon Valley's coattails. That requires nothing short of a policy revolution.

Samsung is the vanguard of this transformation. How the Lee clan responds to being squeezed between Apple and hungry Chinese upstarts matters a lot to shareholders. It matters even more to tens of millions of South Koreans.