The best chance for peace in Afghanistan is now Afghan security forces inspect the wreckage of a passenger van after a blast in Kabul on June 12: the security situation is rapidly deteriorating.   © Reuters
CopyCopied

As U.S. forces left Bagram Air Base after 20 years of combat operations on July 2 amid a rapidly deteriorating security situation in Afghanistan, the Taliban continued to expand its area of control in a manner no one thought was possible.

The Afghan National Defense and Security Forces (ANDSF) is struggling to cope with the Taliban offensive and is still adjusting to the diminishing support by U.S. and NATO troops. Violence is surging, with civilians being killed in combat and terrorist attacks occurring on a daily basis.

The peace talks are ongoing but have not made any substantial progress. Has a chance for the Afghan people to achieve sustainable peace after 40 years of civil war already been lost? Are we going to see a military takeover of the country by the Taliban? What should the international community do to support the cause of peace? Despite such grim forebodings, I believe that conditions for a negotiated peace have never been more favorable than today.

First, there is a firm consensus among Afghan leaders and U.S. policymakers that the only way to peace is a political settlement that incorporates the Taliban as a legitimate stakeholder. The 20-year war in Afghanistan has cost the U.S. $2 trillion and more than 2,400 lives.

Yet the Taliban, a movement born among Pashtun Afghan refugees, remain undefeated. After they vanished from Afghanistan, they regrouped on the Pakistani side of the border and re-infiltrated into Afghanistan, capitalizing on the enormous lack of basic services created by war that the government in Kabul had been unable to fill. In exchange for a semblance of order, the Taliban have forced many rural people to accept their presence. Most of the key stakeholders have come to accept the fact that the Taliban cannot be wished away.

That Afghanistan's neighbors are all calling for peace adds weight to the moment. Forty years of civil war has brought nothing but refugees, narcotics and radical jihadis, and they are willing to support a political settlement in Afghanistan that includes but is not dominated by the Taliban.

Pakistan's support for an inclusive peace is also propitious. While Islamabad has supported the Taliban in the past, it now fears that its victory could embolden the Pakistani Taliban, known as Tehrik-e-Taliban Pakistan. Pakistan can further exercise its influence to persuade the Taliban to choose a path of negotiated peace instead of a military takeover.

Finally, continuing to terrorize fellow Afghans following the withdrawal of foreign troops will only undermine the legitimacy of the Taliban. With so many prominent Muslim scholars denouncing violence and calling for peace in Afghanistan, this may have a long-term impact, sapping the morale of Taliban soldiers as well as stemming the inflow of external support at the same time that the U.S. and NATO are shoring up indirect support for the ANDSF.

Are the Taliban ready for peace, then? When I put this question to Afghan leaders, they say they do not know but will find out in the peace talks. Many of them are cautiously optimistic because, they point out, there is enough incentive for the Taliban to return to peaceful Afghanistan after long years of fighting. The Taliban also understand that it is impossible to rule the entire country by force and that the alternative is never-ending war.

Still, those same leaders seem to believe that a decisive battle following the complete withdrawal of foreign troops is inevitable. The Taliban will not come back to the negotiating table until it tests their full strength against the ANDSF. One such leader told me that whiles he wishes no war, sometimes peace is decided on the battlefield.

Over the past 20 years, Afghanistan has achieved remarkable progress. The infant mortality rate has been halved and the enrollment of girls in primary education has risen from zero to more than 80%. Japan has been a leading supporter of these efforts. It hosted the Tokyo Conference on Afghanistan in 2002 to mobilize international support for the reconstruction of Afghanistan. It is the second-largest donor in development assistance, $6.9 billion in total, after the U.S. 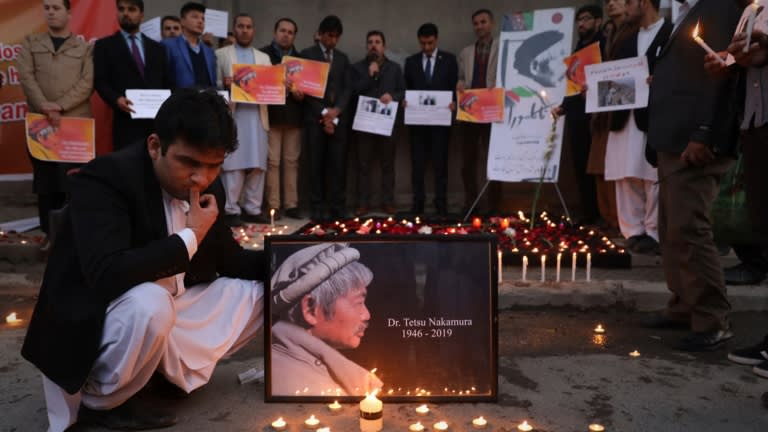 Afghans attend a candlelight vigil for Tetsu Nakamura, a Japanese physician engaged in aid work who was killed in a shooting, in Kabul in December 2019.   © AP

The names and memories of Japanese people such as Sadako Ogata, who led the repatriation of Afghan refugees in the 1990s and Japanese development assistance afterward, and Dr. Tetsu Nakamura, a medical doctor who was killed by terrorists while undertaking an irrigation project to turn desert into a fertile agricultural area, are cherished in many Afghan hearts.

Peace is within the reach of the Afghan people. The international community can support the peace process by strengthening the regional and international consensus for peace and by exercising its remaining influence to stop the violence and start the negotiations, while at the same time assisting Afghan efforts to preserve and advance the remarkable but fragile achievements of the past 20 years. The people of Afghanistan deserve our continued support.

The views and opinions expressed herein are those of the author and do not necessarily reflect the views of the Japanese government.