The danger of Abe's Trumpian turn against South Korea 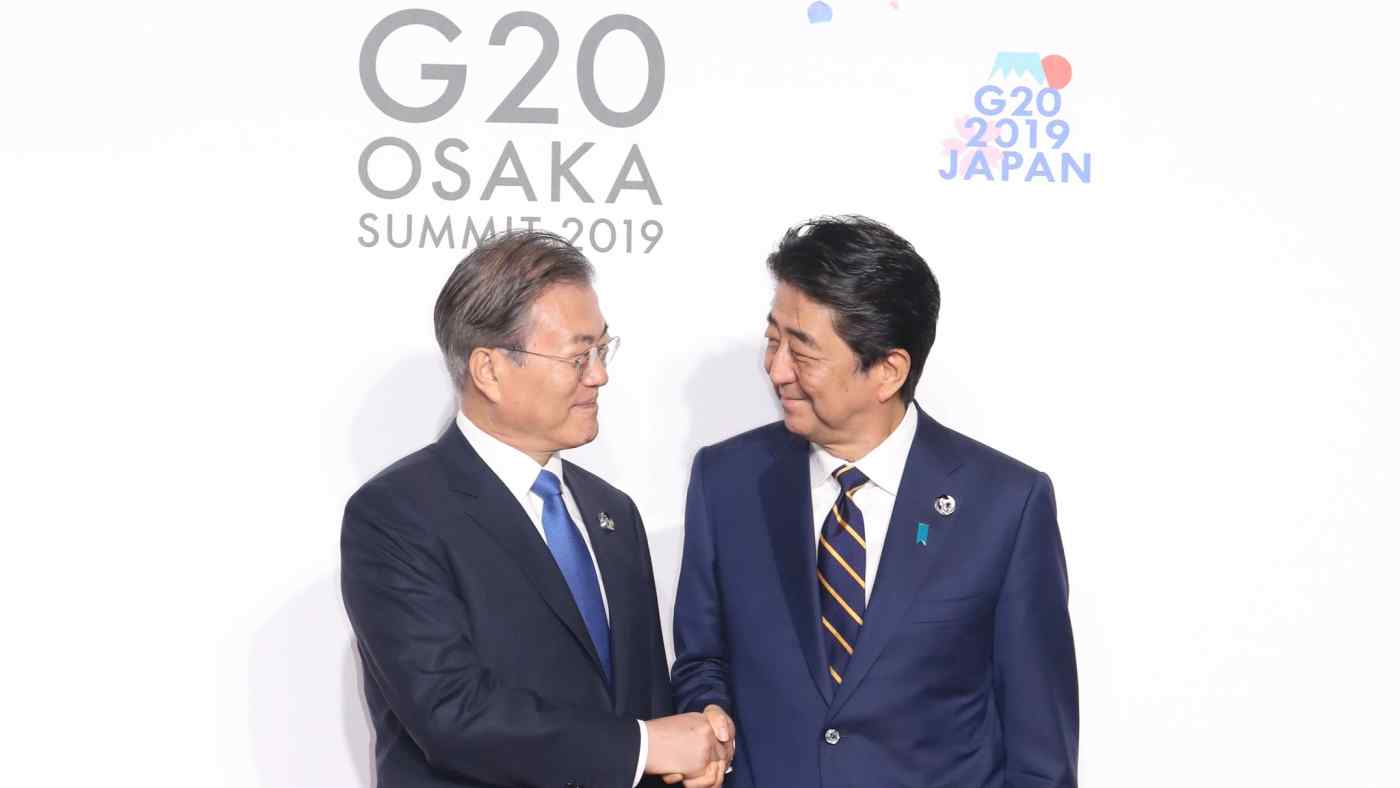 Shinzo Abe clearly has been spending too much time with Donald Trump.

In Osaka last weekend, Japan's Prime Minister Abe assumed the role of adult in the room. He cajoled Group of 20 leaders to reaffirm their faith in markets, free trade and the brand of economic cooperation that served Asia well for decades. A welcome counterpoint to the mercantilism propagated by the U.S. president which is slamming global supply chains and economic growth.

Two days later, Abe announced a sudden about-face toward South Korea, tightening controls on exports of semiconductor materials. It exuded a level of hypocrisy that might make America's trade warrior-in-chief blush. And it is a bad omen for North Asia at a moment of maximum economic risk.

"This is an unhelpful and damaging act right out of the Trump bullying playbook," says Jeff Kingston, head of Asian studies at Temple University's Tokyo campus. "The sanctions hit Korea where it hurts."

There is plenty of blame to go around. In recent decades, a succession of Korean leaders found anti-Japanese sentiment a handy way to excite domestic voting blocs. Moon Jae-in stepped away from a 2015 deal with Tokyo to move beyond the "comfort women" controversy dating back to the Second World War.

Moon did little to limit fallout from an October Supreme Court ruling against Japan's Nippon Steel. Demands that it pay four South Koreans $86,000 in compensation for wartime labor during the 1940s threw relations into chaos.

Abe raising the stakes hardly helps. It might seem like good politics ahead of upper house elections on July 21, stimulating the conservative vote.

But the planned export controls are better news for Chinese companies than Japan's. Given the interconnectedness of Japanese and Korean manufacturing, disruptions lend to China's strengths. North Korea is happy, too, amid diminishing odds that two nations seeking to rein it in will cooperate.

Abe and Moon should be using this year's chaos as an excuse to come together on a shared mission: surviving a nihilistic trade war imperiling both their economies. Rather than being Trumpian proxies, Tokyo and Seoul should be working together to build safety nets to soften blows and secure greater prosperity in the long run.

There is not a moment to waste lowering trade barriers, linking bond and stock markets, forging deeper currency-swap arrangements and perhaps even pooling efforts to create booming startup scenes in both nations. Abe should be prodding Moon to join the Comprehensive and Progressive Agreement for Trans-Pacific Partnership, the huge trade pact that replaced the planned Trans-Pacific Partnership after Trump reneged on it. Tokyo and Seoul should pool their collective $1.7 trillion of foreign-exchange reserves. A bilateral effort to keep free-trade alive could help North Asia run out the clock on a Trump administration lagging in the polls.

Trump has legitimized bad behavior on a variety of fronts. His penchant for coddling strongmen is emboldening leaders from North Korea's Kim Jong Un to Philippine President Rodrigo Duterte. But Abe's duplicitous approach -- free-trader extraordinaire one day, anti-Korean crusader the next -- is particularly jarring.

Granted, Abe has long brought more enthusiasm than skill to diplomatic pursuits. This is particularly true for Russia. Since December 2012, Abe has met with Russian President Vladimir Putin more times than any other world leader by far, but achieved zero progress on the bilateral territorial dispute. Nor is Abe's Trump bromance paying dividends. Trump's bizarre dalliance with Kim has Washington ignoring Tokyo's interests, including its fears about Pyongyang's short-range missiles.

Trump's trade war may have pushed Japanese growth negative in the second quarter as an election looms. In Osaka last week, Trump again expressed a desire to tear up decades-old security arrangements, displayed a startling ignorance of U.S.-Japan ties.

How Abe's action, meantime, can coexist with the G-20's promise in Osaka to "strive to realize a free, fair, nondiscriminatory" environment for trade and investment is an open question. When trying to compete against China, it is best not to emulate Chinese tactics. How is Abe's Korea clampdown different from Beijing's efforts in 2017 to punish South Korea for hosting U.S. missile defense systems? Or China weaponizing real-earth minerals?

For now, the effects of Abe's export controls are likely to be more symbolic than material to economic growth, says Moody's Investor Service analyst Gloria Tsuen. Yet over time, they could further undermine the global economic outlook and Japanese-South Korean trust to deal with threats from Pyongyang. Facing his own collapse in opinion polls -- from the mid-80s to the 40s -- Moon might feel compelled to retaliate, prompting Abe to up the ante. 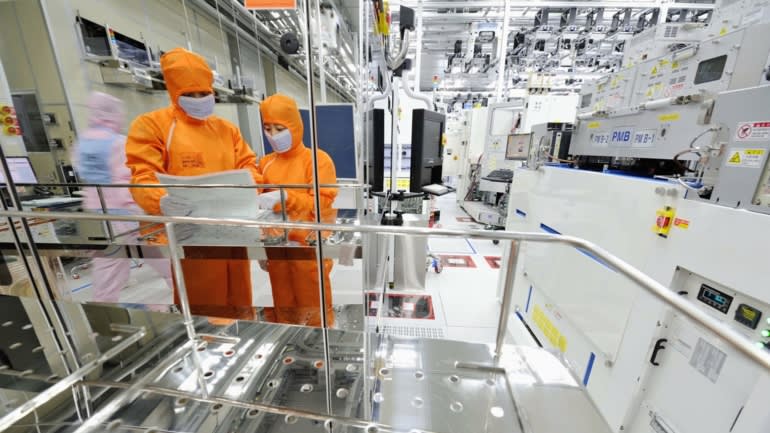 It is the last thing supply chains need. Samsung Electronics, Korea's most important corporate name, might suddenly find it harder to manufacture its Galaxy smartphones and tablets. The risk is not unlike that faced by China's Huawei Technologies from a Trump White House hitting a rival nation's core industry.

Team Abe is gunning for maximum disruption by weaponizing fluorinated polyimide, which is used in flexible smartphone displays. The same applies to high-purity hydrogen fluoride, which is pivotal to assembling the silicon wafers at the core of semiconductors. Along with Samsung, the limits put LG Display, SK Hynix and other groups in harm's way.

Trump seems content to see Washington's two allies on what Sheila Smith of the Council on Foreign Relations terms a "downward spiral." If there is a Trump Doctrine in Asia it is dividing U.S. allies who might forge a shared strategy to counter Washington's bombast. As such, the deterioration of relations is not just about historical memory.

Yes, Koreans still bristle at Japan's wartime aggression. And many Japanese lament the Moon government abandoning the 2015 deal compensating Koreans made to work in wartime brothels, holding out for a better one. But the scrutiny on postwar settlements also reflects jostling for future influence in the fastest-growing economic region.

As such, Smith says, "Japan and South Korea seem to want to carve out separate futures. Now that Washington's grip on the alliances has loosened, Tokyo and Seoul seem destined to follow their own worst impulses."

Impulses that Trump seems all too happy to encourage. But impulses that will not serve either the Japanese or Korean economy well in the long run.

In North Asia, bashing the neighbors for domestic gain is a tried-and-trusted maneuver. But in turning on Korea, Abe's Japan risks losing its hard-won moral high ground on trade. It also risks thrusting a new brawl into a region that already has more than enough disputes.