The difficult path ahead for Thai pro-democracy protesters

Movement must recognize that their cause is a marathon, not a sprint 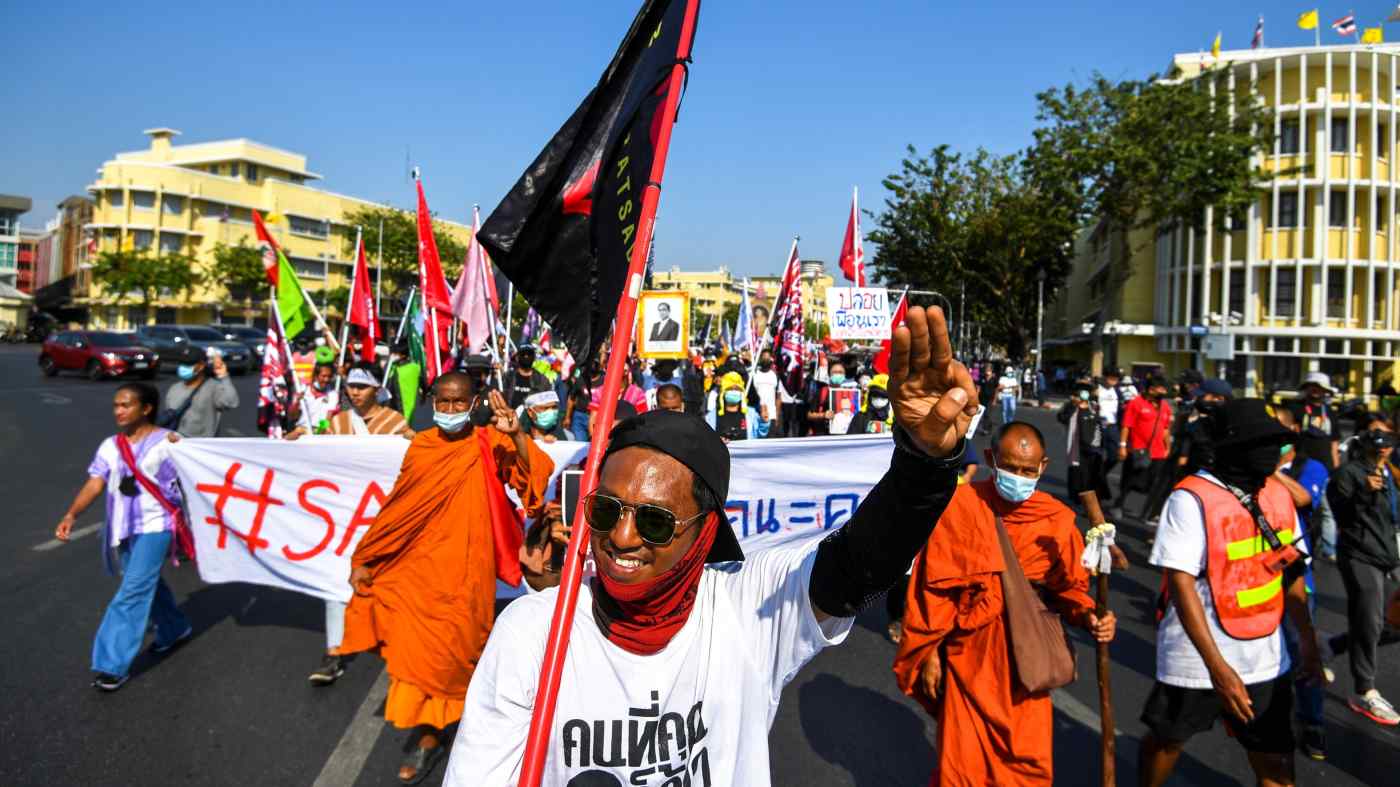 Pro-democracy leader Jatupat "Pai" Boonpattararaksa flashes the three-finger salute during a march from Kasetsart University earlier this month to demand the release of four protesters who were charged under Thailand's lese majeste law.   © Reuters
CopyCopied

"Let it end in our generation" is a popular slogan and hashtag that emerged among young protesters in Thailand.

The slogan refers to putting a complete stop to repeated political intervention by nondemocratic forces, most prominently the Thai military and its penchant for staging coups. This catchphrase also reflects the positivity, defiance, and determination of the 2020 movement for change. Now, the swift victory that the protesters were hoping for seems much more difficult to achieve.

It has been roughly a year since the first large-scale protests against General Prayuth Chan-ocha's government took place on university campuses, and approximately six months since lawyer and activist Anon Nampa first broke taboo by openly questioning the role of the monarchy in Thailand.

The protesters have been unwavering in their demands: Prayuth's resignation, a redraft of the constitution, and reforming the monarchy. But after countless marches, dozens of confrontations with police, and possibly over a hundred arrests later, none of these demands have been met. To make matters worse, nearly all of the prominent protesters have been detained and denied bail on lese-majeste charges.

Staying true to the ideal of a "leaderless" movement, the rallies have continued. But the organic spontaneity of student flash protests that seemed to be one of the movement's strengths a year ago has become one of its most fatal weaknesses. The lack of organization and of a clearly defined leadership means the demonstrations have become susceptible to third-party interference and violent clashes with law enforcement. Partly due to this violence, many have observed that the size of the protests has noticeably decreased in recent weeks.

While the pro-democracy movement licks its wounds and deplores the arrests of its members, it should take this time to seriously consider its next moves.

One option for protesters is to expand their demands in order to appeal to a wider section of society. Young protesters, however, have ruled out coalition-building with moderates who are uncomfortable with the idea of reforming the monarchy but are nevertheless opposed to the government's autocratic ways. This is because many protesters see the military and monarchy as one system that needs to be dismantled, and dropping reforms to the monarchy from their demands would feel like a betrayal of their ideals.

Another option is to create more disruption so that the government is forced to listen to their demands. Peaceful disruption like strikes are generally accepted and can be effective. In Myanmar, medics, bureaucrats, students, and workers began a national strike as part of a campaign to undermine the coup. Blockades and property destruction are examples of more controversial means of resistance, which were adopted by Hong Kong protesters.

Crucially, one of the most significant differences between protest movements in Thailand on the one hand, and Hong Kong and Myanmar on the other, is the differing level of public support. In Hong Kong and Myanmar, it seems that a majority of people are largely sympathetic to the protests. In the 2019 Hong Kong election, for example, 388 out of 452 seats went to pro-democracy candidates. Similarly, Aung San Suu Kyi's National League for Democracy won the 2020 national elections in a landslide. On the other hand, Thailand's 2019 election split the country almost down the middle. Many Thais, especially the older generations, venerate the king and are appalled by calls to limit his power.

This difference in public opinion severely limits the Thai protest movement's mandate and prevents it from utilizing any of the tactics employed by its Hong Kong and Myanmar counterparts. Going on strike will only be effective if enough individuals from critical sectors, such as health care and transportation, participate. There is no guarantee that these workers, many of whom work closely with the Thai government, would be willing to jeopardize their incomes to join the students.

Similarly, even at the height of violent confrontations with police, Hong Kong citizens were surprisingly tolerant of the protests. On the contrary, any radical move from Thai demonstrators will further discredit the movement, and possibly turn more of the public against their democratic cause.

What is next, then, for the Thai protesters? I believe that they should first recognize that this fight is a marathon and not a sprint. It is, especially on the issue of the monarchy, a cultural battle; and hearts and minds do not change overnight.

In many ways, the movement has already dramatically shifted the Overton window of discourse on the monarchy. Royalists now have to go on public television to defend why the king should be able to personally hold stocks in one of Thailand's biggest commercial banks -- something unfathomable six months ago.

In the meantime, the pro-democracy movement should throw its weight and political clout behind smaller movements. Two examples come to mind: a farmers' protest to demand better assistance and compensation for floods caused by government irrigation projects, and the protest by Indigenous Bang Kloy Karens who have been forced out of their homes in the Kaeng Krachan National Park.

Seeing student marchers camped out with Bang Kloy protesters is wonderful. If overthrowing systemic oppression and fighting authoritarianism go hand-in-hand, amplifying the voices of the poor and ethnic minorities will only further the pro-democracy cause, and perhaps be a step toward ending this struggle in the foreseeable future.