The yields on offer are too attractive to forgo.   © Sipa/AP
CopyCopied

Global investors chasing after high returns have been pouring money into Chinese government bonds lately at a record pace. This raises the question of whether they are prepared for the possible ethical investing storm they may be stirring up.

How will they respond if queried about pension fund money financing the Chinese state as it represses its own citizens from Xinjiang to Hong Kong?

Figures from research group Wind Information show foreigners held 2.8 trillion yuan ($412.47 billion) of Chinese bonds as of Aug. 31, up from 2.19 trillion yuan at the beginning of the year and less than 1 trillion yuan just three years ago.

Goldman Sachs projects that another $140 billion is set to flow into Chinese government bonds following FTSE Russell's announcement on Thursday that it will bring them into its global government bond indexes next year.

Over the past year or so, Cathay Pacific Airways, HSBC Holdings and Walt Disney have each tried with mixed success to finely balance the demands of China's ever-so sensitive leaders with those of overseas customers and investors which have their own rising but very different expectations about appropriate corporate behavior.

Long-held concerns about default and credit risks in China, particularly since the authorities opened up the taps to tide the country through the global financial crisis, are very real but they are not hitting demand for its treasuries or for bonds issued by its policy banks.

This is because money follows investment yields and the absence now of capital controls on bond purchases means the yields on offer are too attractive to forgo. Ten-year Chinese government bonds pay around 3%. Nothing else comes close in terms of yield among the official debt of other major economies.

Meanwhile, under the direction of the People's Bank of China, Beijing has been actively courting foreign capital by opening up its domestic bond market.

Hardly a month goes by without some measure to streamline rules to allow easier participation and hedging of risks by foreigners. Last week, the regulator moved to allow foreign investors flexible timing on settling their bond trades and to extend trading hours until the Chinese evening, improving convenience for European bond buyers.

But while China government bond returns may sound almost risk-free, they are not, of course.

The idea that Beijing might default on central government debt, though, would be way down the list of worries. Real estate developers may fail, technology companies may pursue dubious restructurings and even state-owned enterprises might default, but nonpayment on Chinese government bonds or those of state policy banks like China Development Bank is a very remote possibility. The headquarters of China Development Bank in Beijing: nonpayment on bonds of state policy banks is a very remote possibility.   © Imaginechina/AP

This is because the creditworthiness of these debts underpin the whole capital market of the country. They are as close to the state and central planning as you can get.

There is some risk that the narrow channels Beijing has opened up in recent years to funnel foreign investment into its bond market, such as the Qualified Foreign Institutional Investor program, could be closed or frozen.

But this seems a minor concern because while Beijing has been very slow to make reforms in this area, full reversals are almost unheard of. The authorities have at last accepted that they can open up while retaining oversight of investment flows without losing overall control, especially as foreign holdings of bonds represent only 2.4% of the domestic market.

Currency risks should not be overlooked in China but neither should they be overplayed. The yuan has remained remarkably stable given the backdrop of economic and political tensions and there is no sign that Beijing will loosen control further over the currency any time soon. China's economy has weathered the COVID-19 storm better than most and that relative strength reduces depreciation risk, at least in the immediate term.

The bigger risks that should concern foreign investors revolve around China's relationship with its external environment, which has never been worse. There is little reason to think it will improve anytime soon.

Whether it be the ongoing U.S.-China decoupling and their trade-cum-tech war, or Beijing's appalling and inexcusable treatment of Uighurs in the northwestern region of Xinjiang, shrill war cries in the Taiwan Strait or the squashing of freedoms in Hong Kong, President Xi Jinping's China faces an angry and distrustful international audience.

Investors need to think broadly about the risks they could face. Last week, U.S. banks including Bank of America, Goldman Sachs, JPMorgan Chase and Morgan Stanley promoted the sale of bonds by one or the other of two Chinese state companies, China National Chemical and China Three Gorges, that had been designated as "Communist Chinese military companies" by the U.S. Defense Department three weeks before. 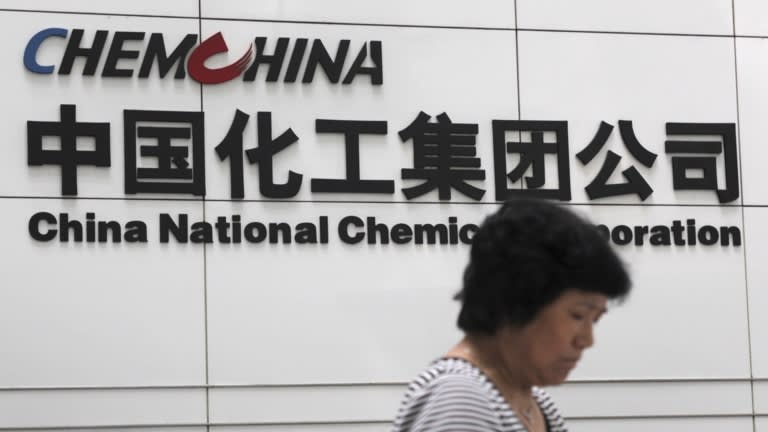 The headquarters of China National Chemical in Beijing: investors need to think broadly about the risks they could face.   © Reuters

There is no suggestion the banks' help, or the purchase of the bonds by U.S. investors, was not legal. But their timing was terrible and the attention could prompt Washington to take further measures.

Already, the Trump administration is working to curtail the ability of Chinese companies to list their shares on U.S. exchanges. Officials have managed to block a top government retirement fund from buying Chinese stocks and have leaned on U.S. universities to divest their holdings.

Xinjiang-related sanctions imposed by the U.S. also mean that some domestically listed Chinese companies are now off limits to foreign investors and banks who wish to stay part of the dollar trading world.

It would seem only a matter of time before investor and activist pressure comes to bear on those directly funding the Chinese state and facilitating its repressive actions, given the wider rise of ethical investing. Bond buyers would be well advised to think beyond simple yields and returns and look at what standards they have committed to their investors and shareholders to follow.