The fire in the ashes of America's Afghanistan defeat 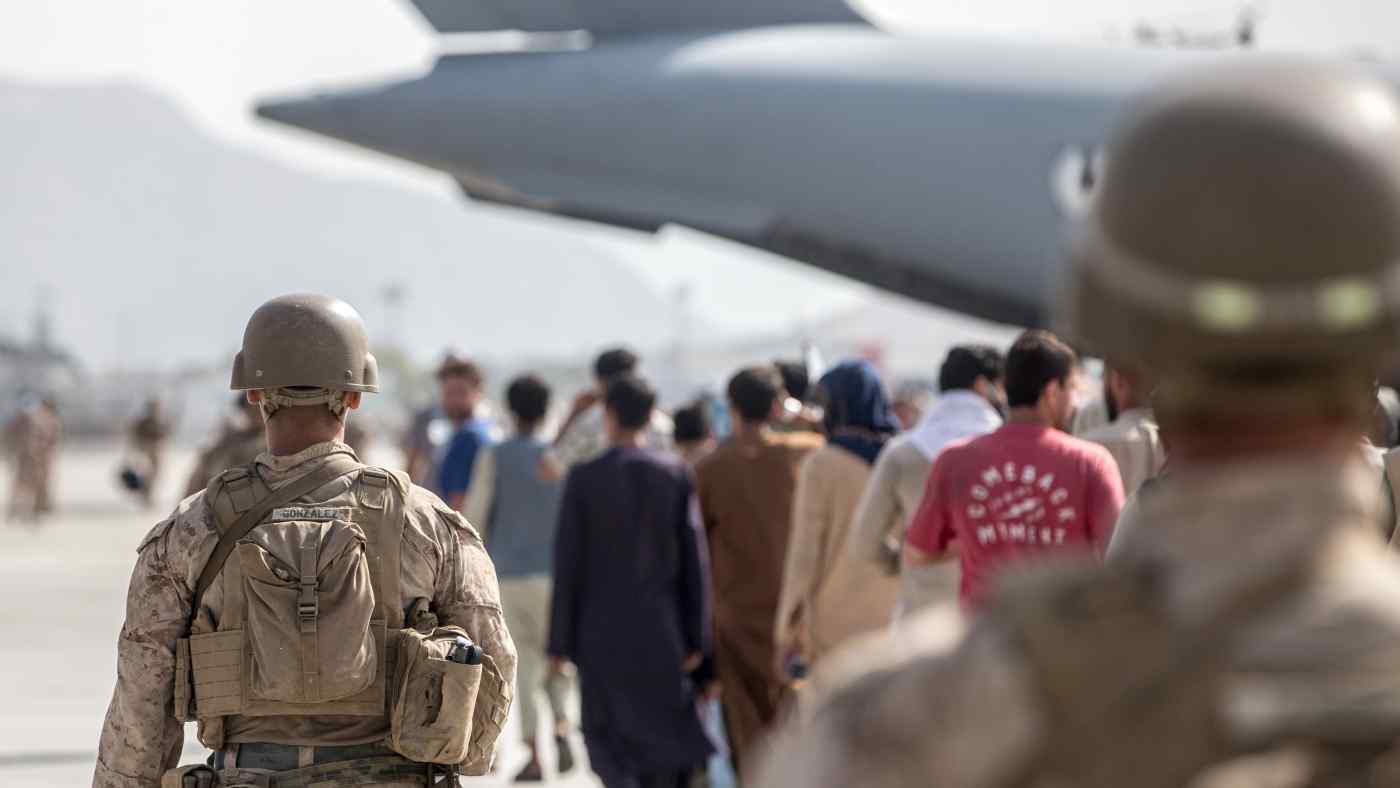 U.S. Marine Corps guide evacuees on to a military aircraft at Hamid Karzai International Airport in Kabul on Aug. 21: departing along with the U.S. forces were the hopes of the universal applicability of Western modernity.     © U.S. Marine Corps/AP
CopyCopied

Satoshi Ikeuchi is professor of religion and global security at the Research Center for Advanced Science and Technology at the University of Tokyo.

U.S. President Joe Biden eloquently defended the withdrawal by chiding U.S. proteges in the collapsed Afghan government for their failure to fight for themselves.

But America's haphazard withdrawal from Afghanistan also put an end to 20 years of the war on terror, which mobilized U.S. allies and other like-minded nations to mount a large-scale military action aimed at remaking the world into a safer place.

Biden made it clear that ending the war in Afghanistan was not just about Afghanistan, but was about putting an end to an era where the U.S. conducted major military operations in foreign places -- particularly in the Middle East -- for the purpose of democratic regime change.

The sense of despair evoked in Biden's speech brought to mind Rudyard Kipling's definitive 1889 poem "The Ballad of East and West," in which the voice of British India explored the perennial theme of the incompatibility of Western and non-Western civilizations.

"Oh, East is East, and West is West, and never the two shall meet," wrote Kipling with an almost wistful air of resignation. "Till Earth and Sky stand presently at God's great Judgment Seat."

Almost as if he was amplifying Kipling's refrain, Biden's speech had the air of a requiem to a lost cause that had purported to build democratic, cohesive and unified nation-states upon the alien soil of the non-Western world. Furthermore, Biden dismissed the possibility of such a development as nonexistent in history, and impossible to apply from the outside.

Departing along with the U.S. forces were the hopes and dreams of the universal applicability of Western modernity. If there was ever an ultimate cause underlying America's intervention in the Middle East over the past two decades, it was the prevalence of this single idea, not ambitions of mere military dominance.

That a U.S. president has relinquished such a claim to ideological superiority certainly marks the end of an epoch in the receding American century.

Japan, perhaps the most astute upholder of the American idea in the Far East, will be deeply affected in the long run by Biden's great reset of Washington's involvement in the world.

As for the Sept. 11 attacks themselves, they smashed the works of two prominent Japanese Americans. Both second-generation minority Americans of non-Western origin, both were so ultramodernist in their advocacy of Western values that they were probably more forthright than most Americans of Western origin. Minoru Yamasaki, pictured in Detroit in March 1964: the architect designed the twin towers of the World Trade Center.   © AP

One was Minoru Yamasaki, the architect who designed the twin towers of the World Trade Center. His best-known work, truly a gigantic creation, fell to pieces after being engorged by burning jet fuel.

The iconic towers were the ultimate expression of modernism aimed at achieving the utmost degree of industrial efficiency and functionality. Yamasaki even tried to add a human touch, but that was mostly in vain.

The other was political scientist Francis Fukuyama, whose bestselling work published in 1992, "The End of History and the Last Man," chronicled the dawn of the post-Cold War era.

Inspired by the fall of the Berlin Wall and the dissolution of the Soviet Union and based on an essay first published in The National Interest in 1989, Fukuyama argued in favor of the universal spread of Western liberal democracy and the free market. Francis Fukuyama, pictured in Washington D.C. in October 2008: the political scientist argued in favor of the universal spread of Western liberal democracy.   © Reuters

According to Fukuyama, humanity had already attained an endpoint of ideational evolution, and there was nothing left for the world other than to adopt liberal democracy as a universal form of government.

Coming as it did at the acme of American dominance in the early days of the post-Cold War era, it was recognized even then that the wider Middle East -- the Arab Muslim world especially -- posed a serious challenge to Fukuyama's universal theory.

The obvious strength of national and religious convictions in the Middle East, bolstered by solid Islamic legal doctrine, was always going to present the most obstinate of obstacles to the spread of Western liberal democracy.

Americans fought back decisively and determinedly, as if to avenge the destruction of Yamasaki's physical creation and to redeem Fukuyama's ideational construct.

It was as if the U.S. had become suddenly aware of its duty to stand up for this challenge as it struggled to turn the page of history toward the universal ascendancy of Western values hinted at in the latter part of Kipling's famous poem.

"But there is neither East nor West, Border, nor Breed, nor Birth," wrote Kipling. "When two strong men stand face to face, tho' they come from the ends of the Earth."

It took two decades for America to quit and leave from that particular end of the Earth, abandoning the false hope of remaking a Muslim nation into a modern liberal democracy according to the Western model.

Now, a sense of futility abounds. Still, the implications of the withdrawal and its impact on other parts of the world are varied and more nuanced.

It might not directly affect Washington's allies in the Far East, just as the defeat in Vietnam did not set off the alleged domino effect of the collapse of the liberal world in Asia, but instead hastened America's victory over the Soviet bloc a decade-and-a-half later.

America's shift to Asia and the Indo-Pacific could be a chance for its allies here -- including Japan -- to play a more active role toward sustaining the free and open world order, where the presence of the U.S. is still indispensable. And sought after.