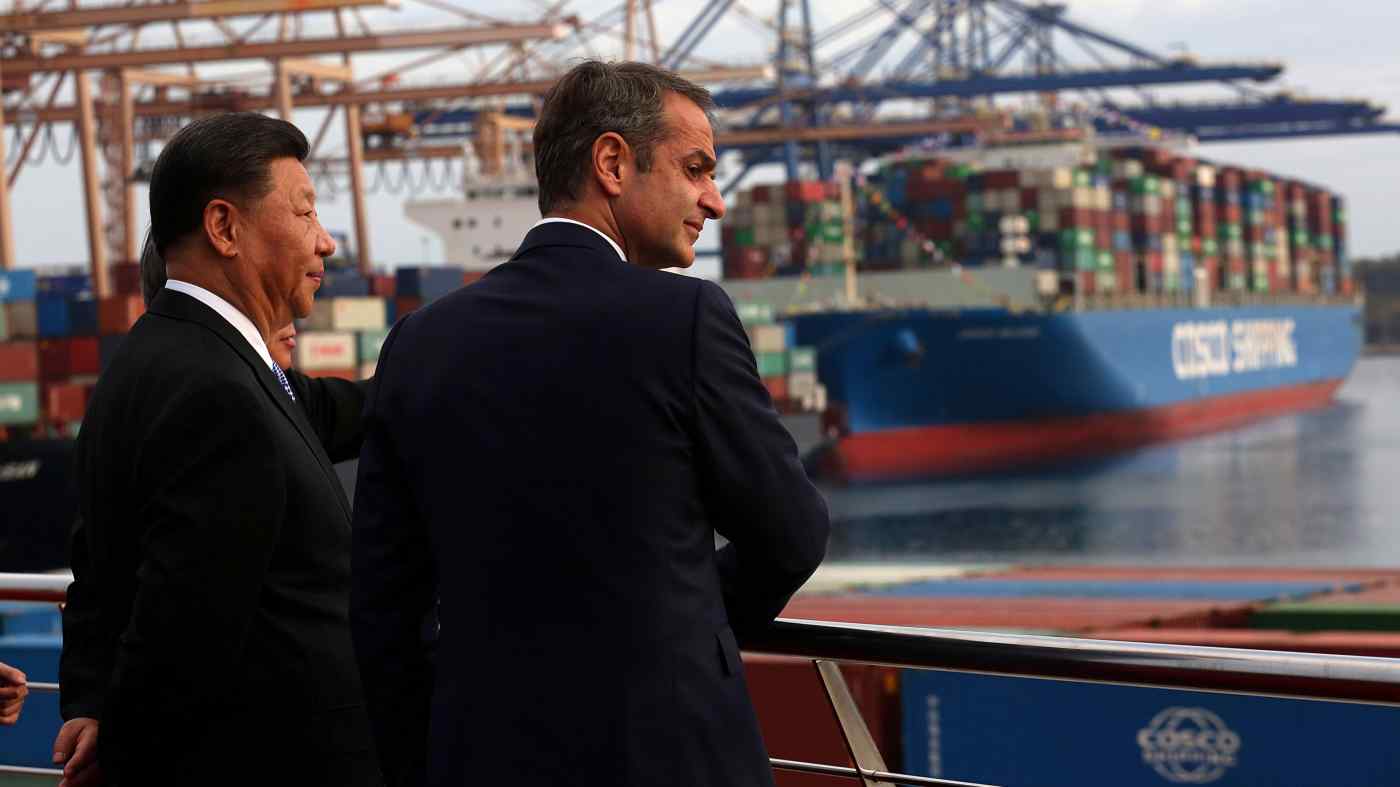 Chinese President Xi Jinping and Greek Prime Minister Kyriakos Mitsotakis visit the container terminal of Cosco in Piraeus in November 2019: has there ever really been such a thing as Chinese debt trap diplomacy?   © Reuters
CopyCopied

Anthony Rowley is author of "Foundations of the Future -- the Global Battle for Infrastructure."

In what Donald Trump might call a case of "fake news," China has often been accused of using "debt trap" diplomacy to lure developing nations into borrowing more than they can afford to finance infrastructure projects and then seizing strategic assets as loan collateral.

As Trump prepares to leave the White House, along with Vice President Mike Pence who chiefly originated the "debt diplomacy" narrative against China in 2018, a series of statements and studies are challenging the notion that Beijing has actually pursued such Machiavellian strategies.

The charges against China are based partly on a misunderstanding, but the debt trap claims are also part of what I argue are "infrastructure wars" involving China on the one hand and a group of other nations including the U.S., Japan, Australia and India on the other.

One of the most often-cited cases of this supposedly unscrupulous tactic employed by China involves the Hambantota Harbour in Sri Lanka, which was financed largely by Chinese loans. Another involves a trans-Malaysia rail project that China is also financing in large part.

Both involve a port development. At Hambantota, the harbor was signed over to China on a 99-year lease in December, 2017, when Sri Lanka was unable to repay loans taken to develop the port. In Malaysia's case, loans from China had to be renegotiated from a position of default. There have been numerous other reports suggesting that in Africa, the Kenyan government risks losing its port in Mombasa to China should the country become unable to repay large loans advanced by Chinese lenders.

All these might have passed as normal commercial transactions had not Vice President Pence not chosen to declare in a speech at Washington's Hudson Institute in 2018 that China was using over-lending in order to gain control over strategic maritime assets in various parts of the world.

China, Pence asserted, was using debt diplomacy "to expand its influence" by "offering hundreds of billions of dollars in infrastructure loans to governments from Asia to Africa to Europe and even Latin America. The terms are opaque at best and the benefits flow overwhelmingly to Beijing."

Such deals, Pence claimed, are of "questionable commercial value," implying that China's port purchases were motivated with strategic ends in mind. Pence pointed to Chinese President Xi Jimping's 2013 Belt and Road Initiative, which includes maritime as well as land corridors in Asia, Europe, Africa, and beyond.

Pence's claims appeared to gain more credence in November 2019 when Chinese shipping giant Cosco purchased a majority stake in Greece's largest harbor in Piraeus, and around the same time stakes in major ports at Trieste and Ravenna in Italy, as well as at Koper in Slovenia and Fiume in Croatia. Construction site of new logistics platform at Trieste port, pictured in April 2019: the city of Trieste is preparing to open its new port with Italy becoming the first Group of Seven nation to sign on to China's Belt and Road Initiative infrastructure project.   © Getty Images

The claims all fed into a much larger U.S.-China rivalry involving the world's two biggest economies that have erupted since outgoing Trump launched a trade war against China which has since morphed into more general great power rivalry over technology and economic development.

But has there ever really been such a thing as Chinese debt trap diplomacy, as Indian strategist Brahma Chellaney is credited with coining the term in 2017? Or, the U.S. ambassador to Australia Arthur Culvahouse has been reported as referring to it, as "payday loan diplomacy?"

Recent developments cast doubts over the notion of any such conscious strategy on China's part. For example, Chatham House, the Royal Institute of International Affairs in London, held a webinar in October with the rather provocative title of "Debunking the Myth of Debt-trap Diplomacy."

China's development financing system is "too fragmented and poorly coordinated to pursue detailed strategic objectives," it was argued at Chatham House, based on a research paper by presented by scholars Lee Jones and Shahar Hameiri. In actual fact it is developing-country governments, and associated political and economic interests themselves, that determine the nature of BRI projects on their territory, the paper argued.

Sri Lankan authorities used Chinese loans made in connection with the Hambantota Harbour partly to pay off debt incurred from other sources, it was claimed at Chatham House, and no Chinese naval vessels have so far made use of the port, as has been suggested as China's motive for financing it.

It was also noted during the Chatham House event that in Malaysia, where China loans were made to finance the cross peninsula rail project, some of the money was used to fill "holes" in the country's sovereign wealth fund made during former prime minister Nazib Razak's reign.

In the book China's Belt and Road Initiative: Impacts on Asia and Policy Agenda, published earlier this year, academics Pradumna B. Rana and Xianbai Ji detailed a survey of some 1,000 opinion leaders in Asia that also challenged the debt trap diplomacy thesis.

It concluded that 42% of respondents believed that the BRI represented a net benefit for their countries, while only 18% said it was a net cost. The strongest endorsements came from South Asian countries including Bangladesh, Pakistan and Nepal.

Former Japanese vice finance minister for international finance and head of the Japan Bank for International Cooperation Hiroshi Watanabe suggested to this writer that lack of due diligence, plus competition among Chinese lenders were key factors contributing to problems with China's overseas loans rather than debt trap diplomacy.

The acrimony that has characterized U.S.-China relations generally and with regard to infrastructure, in particular, is likely to wane with the advent of the Biden administration. At the same time the World Bank is hoping to coordinate aspects of global infrastructure activity -- a very welcome development.