The myth of China's manufacturing decline William Bratton is author of "China's Rise, Asia's Decline," which will be published in early 2021 by Marshall Cavendish.

As President-elect Joe Biden plans a China policy for his new administration, he should be careful not to fall into the trap of believing that global companies are rushing to pull their supply chains out of China, leaving it a diminished force in manufacturing.

The idea that China has reached peak manufacturing and is now losing out to Southeast Asia and India is as persistent as it is misleading. Chinese manufacturing is in fact highly resilient, as demonstrated by its continued growth and global export competitiveness. Policymakers in Washington, D.C., and around the Asia Pacific should recognize that manufacturing in China has survived the Trump-era trade war and tariffs largely unscathed -- and start preparing for the implications of the country's enduring leadership in making everything from cars to consumer electronics.

It is true that some manufacturing has moved out of China into its neighbors. Vietnam has been a particular beneficiary, increasing its global share of manufactured exports significantly in recent years. But although shifts in supply chains often generate a lot of excitement, especially for those looking for evidence that China's economic rise is slowing, they do not appear to have had any negative impact on the relentless ascent of Chinese manufacturing.

In part, this reflects the fact that China operates on a completely different scale to its neighbors. The value of its manufacturing output is more than the rest of Asia combined. Japan, the region's second-largest manufacturer, produces a quarter of China's output. India, despite its efforts to develop its manufacturing base under the Make in India initiative, only produces approximately a tenth of what China does. And although Vietnam's manufacturing growth is attracting attention, its industrial base is just a small fraction of China's, concentrated across relatively few products.

As such, the shift of some production to its neighbors has not dented China's manufacturing base. In fact, contrary to views that its manufacturing activity has peaked, the sector has been reinvigorated in recent years. China's manufacturing output in local currency terms grew between 2016 and 2019 at its fastest three-year rate since 2013, with particularly strong growth in 2017 and 2018.

The loss of a few production plants to its neighbors is also not a sign of terminal decline in China's relative competitiveness. This remains broad-based and has become more entrenched over the last three years, as reflected in its performance in international trade. China's share of global manufactured exports has in fact increased since 2016 to reach 18% in 2019, the second-highest level recorded over the last two decades.

This gain has been despite all the headwinds that the country's manufacturers have faced over recent years and has been unmatched by any other large exporting country. Germany, the U.S., Japan and South Korea all suffered declining shares of global manufactured exports over the same period. Within Asia, China has grown its exports in value-terms since 2016 by more than every other country in the region combined.

China's manufacturing competitiveness is impressively broad-based. It has continued to grow its global exports across all types of products, from the labor-dependent to the technology-intensive, and has actually increased its share of global export markets across the vast majority of manufactured goods over the last three years. This includes many textile-related products, which are potentially most vulnerable to relocation outside its boundaries. 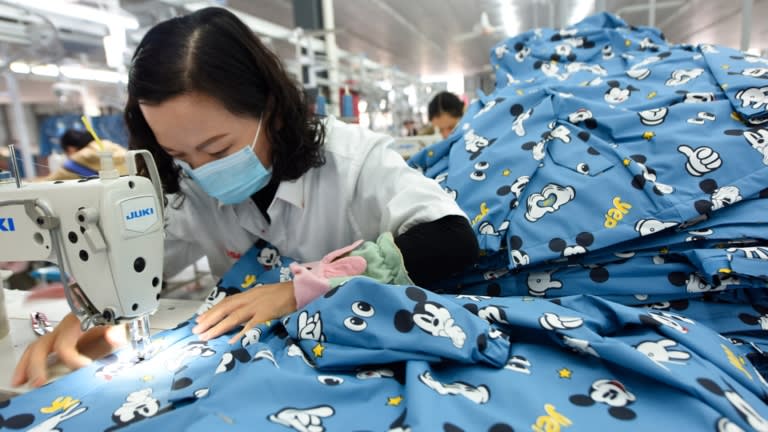 A woman labors in a garment factory in Donghai county in east China's Jiangsu province on Oct. 27.   © Chinatopix/AP

But at the same time, China is establishing indigenous and competitive capabilities across a growing spectrum of skilled and technology-intensive manufacturing activities. Across many such sectors, Chinese companies are assuming international leadership roles through technological innovation and product development. This is reflected in their increasing competitiveness and global export share gains.

So, do not believe the hype. China's manufacturing sector remains robust, healthy, and dynamic. In fact, for all the discussion about the geographical shift of manufacturing into Southeast Asia, the region's trade deficit with China in manufactured products has actually increased over the last three years, not declined.

This is not just a function of China's size, which provides it with the advantages of economies of scale and lower per-unit costs. It is also driven by the sheer diversity of the country's manufacturing base, which allows it to be competitive across multiple industries. In spite of the received wisdom that higher costs will drive many labor-intensive industries out of China, there are still substantial areas with sufficiently low wage costs to actually support more labor-intensive manufacturing sectors.

China's continued manufacturing strength creates profound challenges for its developed and emerging market neighbors alike, not to mention U.S. policy. Developing and maintaining internationally competitive manufacturing is a core component of economic growth and China's entrenched manufacturing dominance threatens to constrain the long-term outlook for the rest of Asia. The country's industrial policies and underlying international competitiveness threaten Asia's more developed economies with the large-scale displacement of advanced export-oriented industries. At the same time, its continued competitiveness across less-skilled and more labor-intensive sectors will limit the ability of its developing neighbors to build comparable capabilities.

The real issue, then, is how Asian countries can navigate the consequences of China's aggressive industrialization and unrivaled competitiveness -- and how a new U.S. administration should configure trade policy in the light of China's enduring strength. Their response will determine whether the country's position at the top of the regional -- if not global -- manufacturing hierarchy will become more or less entrenched.