As economic gloom pervades Hong Kong, even the attractions at its two city-owned theme parks are less attractive these days.

There is a ghost-town vibe at Hong Kong Disneyland. Between the trade war and epic anti-China protests, monthly tourist arrivals -- mostly from the mainland -- to Hong Kong are down as much as 56%. Disney has warned that the protests will cost its local park $275 million in the year to September 2019.

Yet the real thrills and spills can be found at rival Ocean Park. It may soon receive a $1.4 billion public bailout -- one that raises bigger questions about Hong Kong's economic model and about how free a market the city really is.

Though the city's government co-owns Disneyland with Walt Disney Co., it fully owns Ocean Park and all the headaches that come with a tourism-dependent facility -- which was losing money even before the protest movement that began last June.

Ocean Park was founded in 1977. Yet it was not until 1997, when Hong Kong returned to Chinese rule, that the park's ambitions truly flourished. That same year, the older Lai Chi Kok Amusement Park closed its doors. Since then, Ocean Park has grown in size and cultural importance. 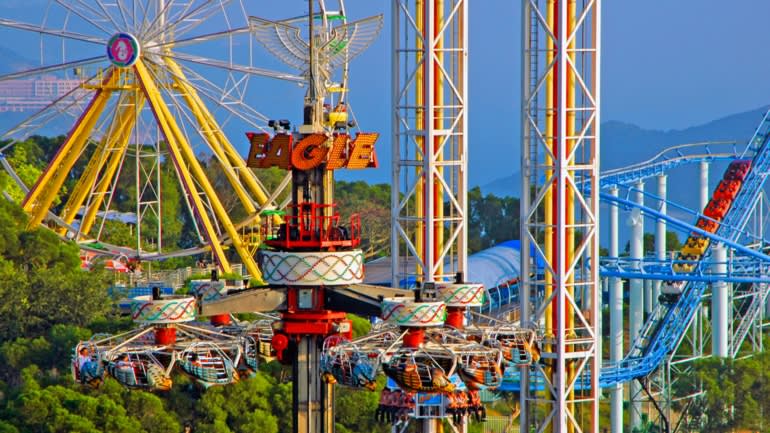 Today, though, many of its star attractions stand as financial metaphors. The Hair Raiser roller coaster seems an apt analogy for the city's sudden drop into recession; the Raging River for its ride with capital outflows; The Abyss for the unknown into which Hong Kong's tycoons are peering. And, of course, Giant Panda Adventure reminds Hong Kongers of their mainland overlords.

Ocean Park is today flirting with default. The bailout that Hong Kong Chief Executive Carrie Lam's government proposes is aimed at $300 million of bank loans due this fiscal year and next which the park cannot pay. For the year ending in June, Ocean Park is on track for an operating cash flow deficit exceeding $77 million. It made a net loss of $72 million in its last fiscal period.

The rescue would restructure the park's government debts and underwrite changes to its mix of attractions. But this is Mickey Mouse thinking if Lam's government does not replace Ocean Park's management. Survival of the fittest, and all that, would dictate that the park needs fresh leadership more than just new roller coasters.

And here we see something more broadly revealing about Hong Kong: it may regularly rank top of the Heritage Foundation's list of freest economies, but only when you look at it with the help of a funhouse mirror. There is a ghost-town vibe at Hong Kong Disneyland.   © Reuters

But that is odd, considering how much of Hong Kong's character runs afoul of free-market ideology. It is an oligarch-led economy dominated by a property market rigged for maximum value. The currency is pegged, decision-making is opaque and the city has the only state-backed Disney in the capitalist world. Its leader is chosen by -- and increasingly beholden to -- Beijing.

Just like with Ocean Park, since returning to mainland control, Hong Kong has proved more adept at treating the symptoms of its troubles than underlying causes. When the 1997-98 Asian crisis occurred, the government plowed untold billions of dollars into stocks to support prices.

When the SARS epidemic hit the city hard in 2003, it turned to new attractions -- rock 'n' roll stars -- to regain its mojo. Its Harbour Fest extravaganza spent untold millions bringing the Rolling Stones, Prince, Carlos Santana, Neil Young and others to town at taxpayer expense. Hong Kong is once again turning to bailouts rather than the retooling needed to build a better economy. The protests of the last seven months are as much about inequality as democracy. A succession of governments failed to level the playing field and ensure incomes kept pace with surging real-estate prices.

Government failure to address these fissures makes Hong Kong more and more of a theme park for oligarchs and billionaires, leaving the 99% behind.

Ocean Park's troubles belie the belief that proximity to China's economy is enough. It may also be a microcosm of gloom about longer-term prospects. Hedge fund manager Kyle Bass of Hayman Capital garnered headlines in recent months for shorting Hong Kong's currency. Now, he warns the city is ripe for a "full-fledged banking crisis" in 2020.

Hyperbole? Time will tell. But the strains squeezing the life out of Ocean Park are not some anomaly. They are a call for Hong Kong's leaders to free the economy from the helter-skelter dynamics warping its future.