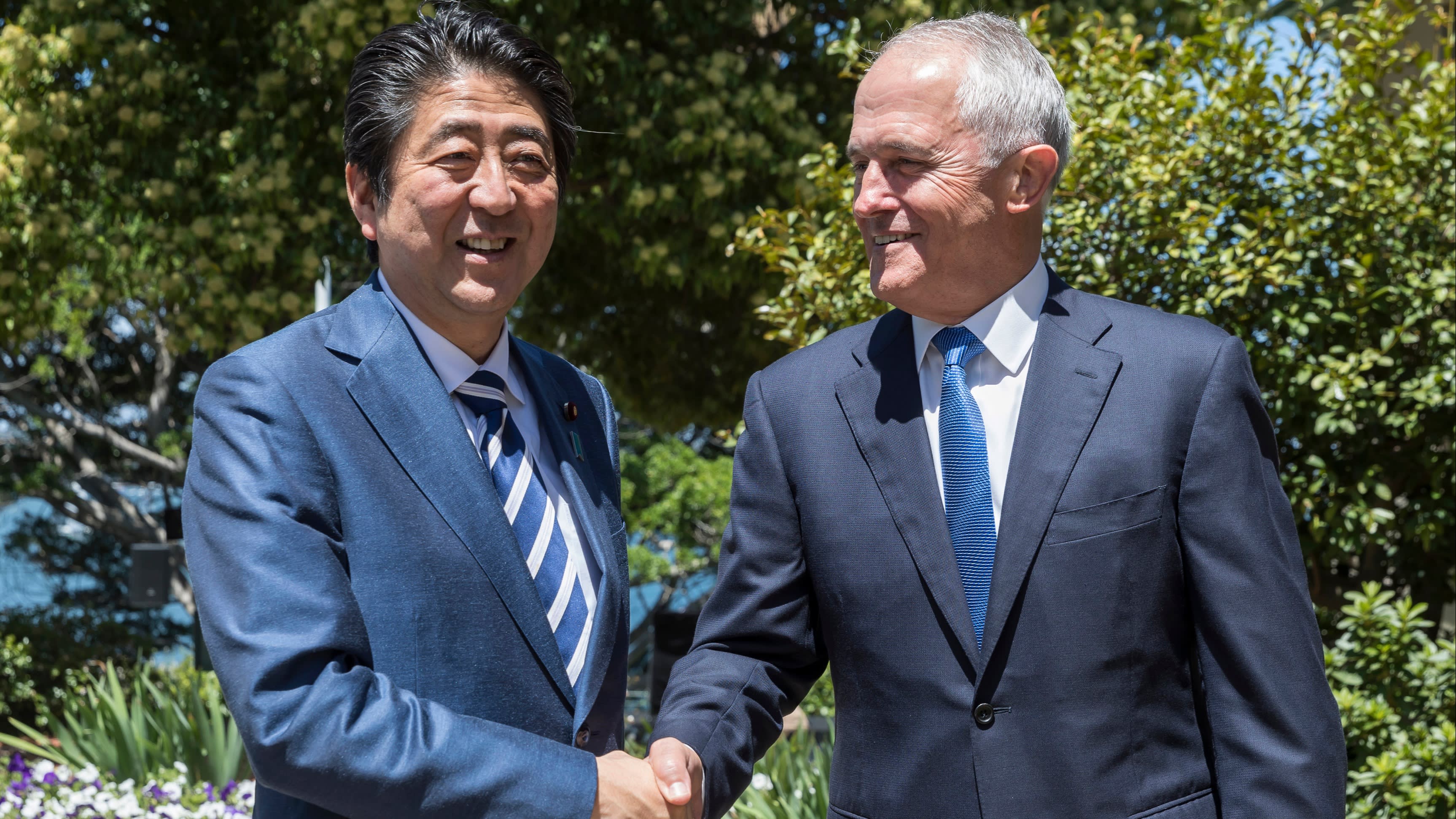 Shinzo Abe shakes hands with Malcom Turnbull in Sydney in January 2017: even after Donald Trump pulled out, we had agreed to keep TPP alive by the remaining countries.   © AP
CopyCopied

Malcolm Turnbull is a former Prime Minister of Australia. His memoir "A Bigger Picture," was published earlier this year.

The world, and our region, will miss the wise and steady voice Shinzo Abe brought to international affairs. He was a great friend of Australia and during the years we worked together as two Prime Ministers we developed a warm friendship based on mutual candor and trust.

In all my dealings with Shinzo I was struck by his good humor, charm and above all calm. I was with him in November 2017 at the APEC meeting in Da Nang. The leaders of eleven nations were about to sign off on the TPP-11, or CPTPP. The original deal which included the United States had been the key element in former President Barack Obama's strategic pivot to Asia, and Japan, like Australia, had been an enthusiastic participant.

When President Donald Trump pulled out of the deal, almost everyone, including Shinzo, thought that the deal was dead. I argued that the remaining eleven nations should proceed without the Americans. My political opponents said I was pursuing a futile vanity project. Shinzo was initially concerned that not only would a TPP-11 potentially offend Trump, the politics in Japan were very challenging. He had sold the TPP to the Japanese people on the basis of increased access to the U.S. market, and now the U.S. was out. Despite all that by January 2017, meeting in Sydney, we had agreed to keep the deal alive. And Shinzo then set to work, as I did, to persuade the remaining TPP countries to stick with the deal.

So by November 2017, it was all agreed. Pens were poised, the cameras were rolling. But at the last minute Canada pulled out. It was humiliating both for Shinzo and our Vietnamese hosts. But he was not angry, or resentful. Calmly we reassessed the situation and agreed that we should stay on track, if the TPP-11 became a TPP-10 or 9 we would not give up. He was clear-eyed about both the economic and strategic benefits of the deal, and like me, determined to capture both.

And so finally in March 2018 the TPP-11 was ratified. Canada returned, nobody else left and the deal is now in force. It could not have happened without Japan's commitment, but I don't believe it could have happened without a leader as determined and measured as Shinzo. It was so easy, so obvious, to just walk away. But thanks to Shinzo we achieved this deal despite a rising tide of protectionism and the fact that it is in force means that other nations, including hopefully the U.S., will be able to join over time.

When Shinzo became PM for the second time in 2012 he had a clear view of what he wanted to achieve in the region -- a free and open Indo-Pacific in which the rule of law prevailed and small nations were able to pursue their destinies without being bullied or coerced by larger ones. The major threat to that appeared to be a rising, and potentially revisionist, China. So Shinzo's mission was to ensure the U.S. remained committed to the region and at the same time China was persuaded that it should become a partner in the further consolidation of the rules-based order.

Maintaining a strategic balance in the region was an essential part of his long term vision and so we worked together to reinstate in the Quadrilateral Security Dialogue with Japan, Australia, the U.S. and India. By the time Trump was elected in 2016, China was already putting pressure on its neighbors advancing territorial claims in the East and South China Seas, reinforced with the construction of forward operating bases on artificial islands -- all in defiance of international law.

At the same time North Korea under its new leader, Kim Jong Un, increased its provocations with nuclear tests, refused to return kidnapped Japanese citizens and fired missiles that flew over Japan all coupled with regular blood-curdling threats of annihilation. And then to add to that deteriorating environment, the newly elected President Trump started to question the value of America's commitments to its allies in the region, claiming that Japan was not contributing enough to the cost of America's military bases. His erratic leadership style was calculated to unsettle friend and foe alike, and many in the region began to question whether the U.S. could be relied on in the future.

These challenges called for all of Shinzo's qualities. In Trump he had to build a relationship of trust with somebody utterly unlike any other leader with whom he had dealt. When the three of us were together, I could see that Trump was testing Shinzo, trying to unsteady him with provocations about Japanese history. Shinzo was unflappable, always calm, good-humored company, but always coming back to the issue he wanted to pursue. Abe, Trump and Turnbull during the ASEAN Summit in Manila in November 2017: Trump tested Shinzo, trying to unsteady him with provocations about Japanese history.   © AP

History hangs heavy on Japan and its leaders. Keenly aware of bitter resentment, especially from its neighbors in China and Korea, Japan has been reluctant to assume a stronger voice in global affairs lest it be seen as returning to old belligerent ways.

It is a complex mix of politics, history, and psychology difficult for foreigners to understand. But from my perspective, Shinzo Abe was able to increase Japan's global stature and influence, enhance its military capabilities, and at the same time acknowledge the criminal mistakes of the past with candor and remorse as he did on the 70th anniversary of the end of World War II in 2015.

Shinzo's retirement as Prime Minister will leave a real gap in the international councils where he has been so respected for so long. In all our dealings he was profoundly decent and sincere; qualities all too rare in political circles. He will be sorely missed, but his many friends around the world thank him for his service and wish him a swift return to good health and a long and happy life with his wife Akie.