Trump has ramped up the global blame game.   © Reuters
CopyCopied

A week ago, many in Asia calculated the odds of a U.S. contraction as still reasonably low. That was despite coronavirus risks and China's abrupt slowdown. However, President Donald Trump's delusional March 11 Oval Office address, which aimed at calming the situation but only served to inflame it, depicted a White House fiddling as global markets burn.

Now the America First presidency is colliding with the last thing the world needs: a likely sudden and sharp recession in the biggest economy. Asia stands to be a particular loser.

Here are three reasons why Trump's denial is putting Asia in harm's way.

One: he is adding fuel to the risk of recession. As events, travel and most forms of human interaction get canceled, so will confidence to spend, invest and hire. CEOs watching Trump's nonresponse to this all-hands-on-deck crisis are sure to scale back business plans for the duration of 2020 and heading toward 2021.

Trump could have cheered Asian markets with a sober and honest acknowledgment of growth risks and by telegraphing bold action. A sizable fiscal stimulus would amplify the Fed's surprise March 3 rate cut. So would Treasury Secretary Steven Mnuchin holding emergency talks with G-7 counterparts on coordinated steps to restore confidence.

Since January 2017, Trump has tried to make trickle-down economics great again. With his $1.7 trillion tax cut and a series of Fed rate cuts, the resultant growth proved a boon to Asia as U.S. consumers gorged on goods made in China, Vietnam and other low-cost economies.

The past week exposed how ephemeral that demand was, and how Asia is now looking at a year in which the two world's biggest economies might be more of a drag than an engine for world growth.

Two: he has ramped up the global blame game. Beijing is seething at Trump's team for slapping a giant Made in China label on this pandemic. Most people outside China do not dispute where the Wuhan coronavirus, as U.S. Secretary of State Mike Pompeo called it, started. Yet Beijing is not culpable for America's glacial response. 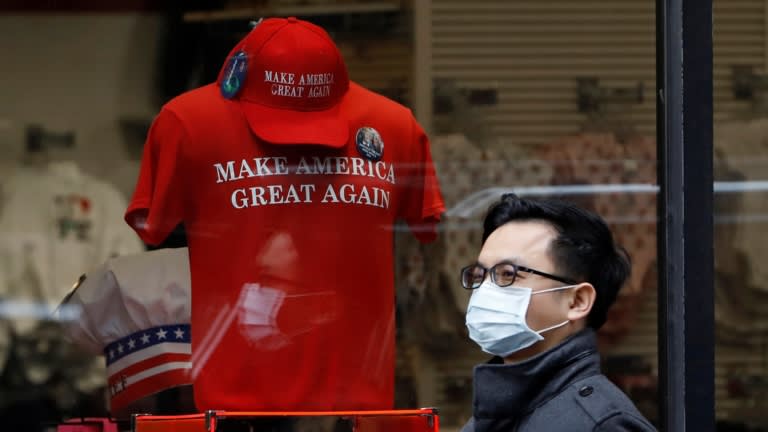 The America First presidency is colliding with the last thing the world needs.   © Reuters

On March 11, Trump pivoted to his xenophobic-language comfort zone, warning Americans of a "foreign virus" that was "started in China." That came hours after Robert O'Brien, Trump's latest national security adviser, said it "probably cost the world community two months" because the "outbreak in Wuhan was covered up."

Many geopolitical observers are aghast at Trump boasting that Europe has more coronavirus cases than the U.S. and at him announcing a European travel ban without bothering to consult officials in Brussels.

"It's interesting, a kind of a sign of the post-American world," said Ben Rhodes, foreign policy adviser to former president Barack Obama, on his Pod Save the World podcast. As the coronavirus spreads, he says, "The U.S. president is just not performing the usual role of seeking to mobilize collective action to problems around the world. The weirdest thing in watching this is that nobody expects him to."

Yet there is something markets should indeed expect: Trump's blame-China line will worsen fraught relations and probably lead to trade clashes.

Three: what does an angry, politically wounded Trump do next? A roaring stock market has so far enabled him to survive any number of cronyism scandals, including impeachment. But now the currency that Trump used to buy support is running out just ahead of the November election. Bashing Asia will be at the front of Trump's efforts to cheer his base.

Blaming China for Trump's own botched coronavirus response could give way to new, or increased, tariffs. As America's economy slows, expect Trump to lash out at President Xi Jinping's government for not ceding more ground in last year's phase one trade deal and to demand that Xi immediately begin negotiating anew.

Trump could greatly expand his blacklist of mainland companies. A list that started with telecom company ZTE, later extended to Huawei Technologies and 200-plus other mainland startups, could swell in the months ahead. Anything that impedes Chinese growth, or unnerves Shanghai stocks, would reverberate around the region.

So would Trump making good on a yearslong threat to slap 25% taxes on imports of cars and auto parts. It would upend Asia's all-important supply chains in ways China tariffs did not.

Trump also could instruct Mnuchin's team to weaken the dollar. Stronger exchange rates would hit China, Japan, South Korea, Singapore and Taiwan overnight. They would also crimp growth in Indonesia, the Philippines, India and beyond.

The America First president's fingerprints were all over the Nikkei Stock Average's free fall on Friday, the biggest drop in decades. Trump's shaky grasp of risks that lie ahead ensure this will not be the last time Asian markets suffer huge losses.