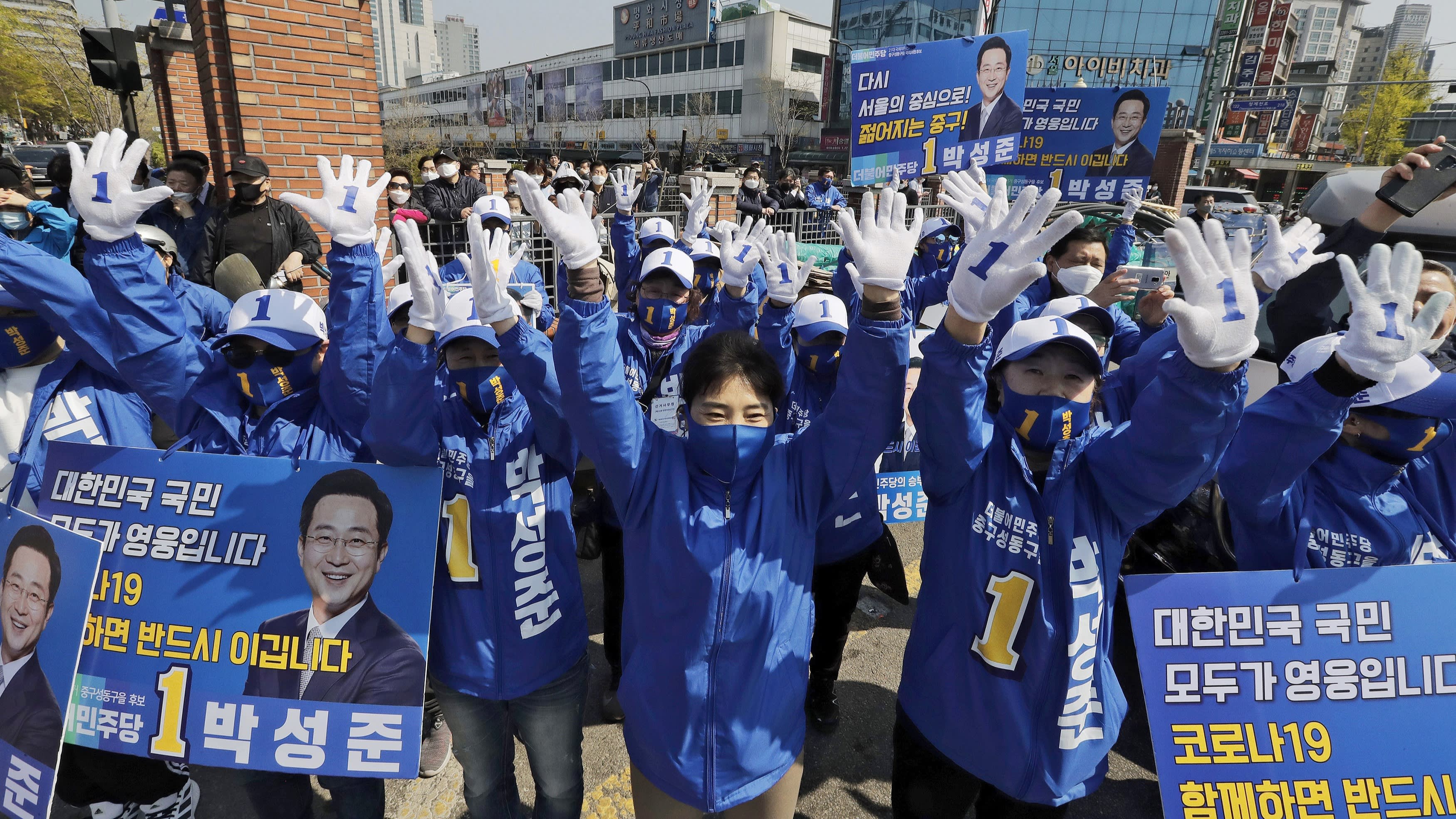 The ruling Democratic Party's supporters wave their hands during a campaign in Seoul on Apr. 14: the landslide victory represents a long-term burden for South Korea's democracy.   © AP
CopyCopied

Jai Kwan Jung is Professor in the Department of Political Science and International Relations at Korea University.

South Korea's National Assembly elections on April 15 resulted in a landslide victory for President Moon Jae-in's government and his Democratic Party -- it won 180 seats out of 300. This is unprecedented in South Korea since its transition to democracy in 1987.

With 60% of the seats, the DP can now pass all kinds of legislation by itself, except for revising the constitution.

An outcome of this magnitude was surprising, but there are three important reasons for it, and one warning that follows from it.

First, the Moon government's handling of the coronavirus pandemic crisis worked in its favor. According to survey data collected a week before the elections, more than three-quarters of Korean voters thought that the government had been effective in managing the COVID-19 crisis.

Yet this favorable public opinion developed only a month before the elections. In the early period of the crisis, the Moon government was criticized for not imposing an entry ban on people from China and for not handling well the shortage of face masks. People had to wait for hours in a long line for face masks and complained about the government's poor preparation for supplying them nationwide.

It was a serious alarm for the government and the ruling party as the election was approaching.

But the government soon introduced a rationing system of face masks, while continuing to employ active testing and transparent reporting without lockdowns, and its response seemed even better from mid-March as other advanced industrial democracies failed to stop the rapid spread of the virus. The World Health Organization and foreign media applauded the Moon government's approach, comparing it favorably to Italy and the U.S.

This relatively effective management of the pandemic crisis was a clear factor in the president's approval rates, which increased from 41% in January to 59% a day before the elections, and for the DP's sweeping victory.

The second reason is that the main opposition party has had poor leadership.

Hwang Kyo-Ahn, prime minister during the presidency of Park Geun-hye, who was impeached and jailed, took the party leadership in February 2019 after it had suffered a crushing defeat in the 2018 local elections. Since then, Hwang's major achievement has been merging with minor conservative parties under a new party name, United Future Party, or UFP, two months before the general elections.

But he has relied on a narrow group of more extreme conservative elites, who are mostly from the Youngnam region, and caused conflict with moderate conservatives in the candidate nomination process.

This meant the UFP's ideological position appeared distant from average voters during the campaign. For example, the UFP framed the 2020 elections as a judgment on the Moon government by contending that the economy was on the verge of collapse and that national security issues, especially to do with North Korea, had been handled in the wrong way for the past three years. But this framing did not attract voters.

The final reason is that the political ground for progressive and conservative parties has shifted since the popular candlelight protests against Park Geun-hye's corruption. They lasted for six months to April 2017, with a total of 17 million participants, and ended with her impeachment, also an unprecedented event in South Korean history.

Previously, conservatives claimed more of the political ground. In the 2007 presidential elections, Lee Myung-bak was elected with the largest margin so far.

But the massive scale of popular protests and the presidential impeachment in 2016-17 have shaken the ideological distribution of voters. Those critical events have helped to expand the progressive bloc while shrinking the conservative one. The 2020 election outcome reconfirmed the shifted political reality.

At the same time, the DP's landslide victory represents a long-term burden for South Korean democracy.

The DP passed an electoral reform bill along with four minor parties last December. It was intended to promote a multiparty system by distributing more seats to minor parties in proportional representation elections. However, the DP and UFP together subverted this reform by forming satellite parties to pick up those PR seats.

This failed electoral reform will exacerbate the intensifying competition between the two major parties and push out other, smaller ones. The DP should be aware that polarizing partisan politics has been a major obstacle to the development of South Korean democracy in the past decade.