Graduation would have benefits for Beijing as well as other nations Professor David Ahlstrom is acting chairman of the Department of Management of The Chinese University of Hong Kong Business School.

China is clearly no longer a poor country after four decades of high and steady economic growth.

According to official data, its economy returned to growth in the April-June quarter, expanding 3.2% even as many major developed economies slowed further under the impact of the coronavirus pandemic. Early this year, China's National Bureau of Statistics published figures showing annual per capita gross domestic product had surpassed $10,000 for the first time while private counts show the country has more billionaires among its populace than any other except the U.S.

China's sustained economic growth has drawn attention from other countries seeking ideas for accelerating their own development. But it has also prompted the U.S. and a number of other advanced economies to argue that China has already graduated from the "developing country" status that entitles it to preferential treatment as an emerging market under the rules of the World Trade Organization and other international agreements.

China, seeing little to gain from such a change, points to indicators such as its infant mortality and adult illiteracy rates as well as average life expectancy at birth to argue that it still should be considered a developing economy for purposes of trade and aid.

Indeed, China also falls well short of developed countries in measures such as per capita income and the stability of its institutions. But the key challenges facing China have less in common with those facing countries like Myanmar and Laos and instead are more like those of "aspirant economies" such as Malaysia and Turkey.

Such countries are confronted by the need to develop higher value-added, differentiated products which are often associated with branding or higher technology as they can no longer rely on low wages and low-cost production to drive development. Those which struggle to resolve this problem can get stuck in the middle-income trap, where growth tends to slow or even stagnate at an average income level of about $12,000 as has occurred in Egypt, South Africa, and Venezuela.

China has certainly come a long way from the early 1970s when per capita income was only around $120 a year. Income growth took off as economic reforms enabling entrepreneurship and new venture creation began in 1979 such that by 1997, the World Bank had officially recognized China as a lower-middle income economy. In 2010, the bank upgraded China to the upper-middle income level.

What has been most impressive about China's growth is not so much its magnitude, as Japan, South Korea and several other Asian economies earlier experienced comparably strong, long-term growth. But in China's case, gross domestic product growth has been exceptionally stable for over four decades with very few stumbles.

Aspirant economies' institutions can generally be labeled as mostly stable, but evolving. The legal systems of aspirant economies are often developed to a significant extent but enforcement and the application of the law in areas such as property rights can be erratic.

There is evidence from aspirant economies that the government can play a key role in encouraging innovation and other aspects of improving corporate competitiveness to facilitate the move up to high income status. In particular, government can help by removing barriers to innovation and fostering indigenous technological and brand development.

China today already has a strong focus on moving up the value chain and becoming a world technology leader. Unlike in some Western countries, state-related entities in China are taking on much of this work of acquiring and improving foreign technology to help advance the capacity of Chinese industry. As China is still playing catch-up in many sectors in terms of technology and productivity, it may be able to continue for a number of years to acquire and improve established technology product designs. 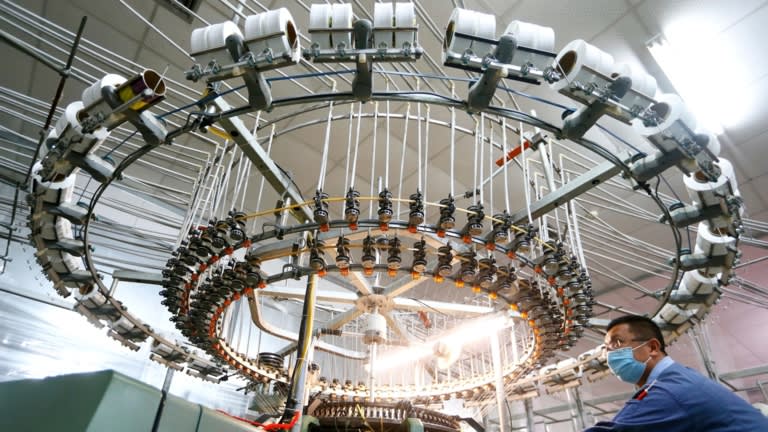 A textile mill in Qingdao, pictured in October 2019: China has a strong focus on moving up the value chain.   © Imaginechina/AP

Yet as China starts to reach the middle income trap level of $12,000 to $15,000 over the next decade, incremental improvements will generate less value. Chinese companies will have to develop more indigenous technology and build brand names through improved quality and service. The government can help in this endeavor but individual enterprises will have to take the lead.

Aspirant economies that are not able to develop higher value-added, differentiated products will find it difficult to move up into the ranks of developed economies. China is confronting this very problem now but can learn from the examples of countries like Japan and South Korea in fostering indigenous technologies and brands as well as from the experience of others that have largely failed in this endeavor.

China is no longer an emerging economy and probably has not been one for nearly a decade. While the U.S. Trade Representative may have acted hastily in declaring that it would start considering China as a developed country for trade purposes last February, multilateral bodies should take a fresh look at such countries that have long ceased to be "emerging."

While China values its status as a developing economy in terms of trade privileges and obligations under climate change agreements regulations, Beijing should appreciate that being recognized as "developed" would have its own benefits.

China's success at bringing the coronavirus pandemic under control within its borders, constructing new hospitals in a matter of days and developing new testing methods as well as managing other regional geopolitical challenges have given Beijing a chance to show its leadership and build its influence. A developed China exercising responsible leadership is vital to the stability of Asia and the effort to combat poverty everywhere.