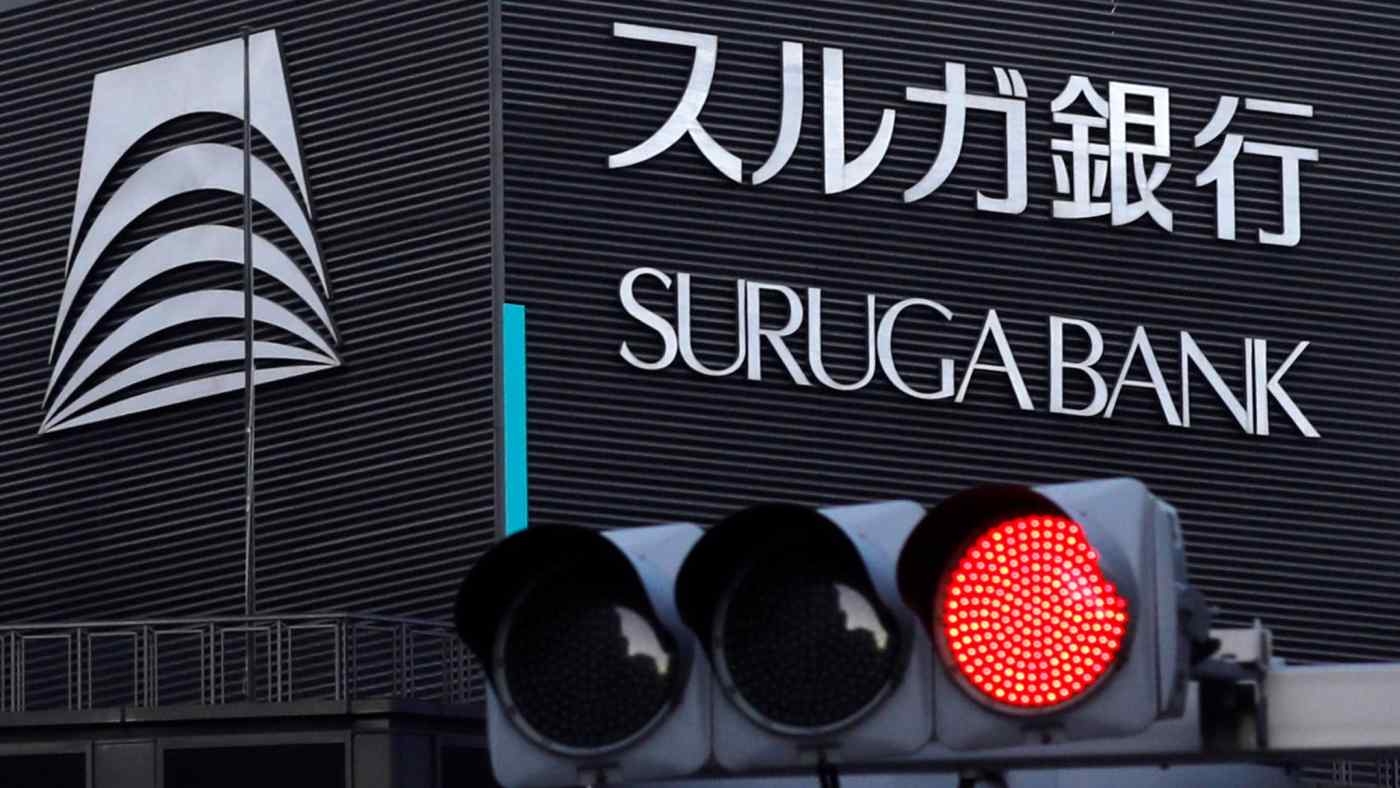 One of the biggest economic stories in Japan last year received very little publicity overseas and only modest attention at home.

Not Donald Trump's trade war or the winter bloodbath in the stock market. Both may eventually prove short-lived if disturbing phenomena.

The lending scandal at Suruga Bank was something altogether different. It is an affair with deep roots which could yet have long- term consequences, not least for Prime Minister Shinzo Abe's faltering efforts to reflate the Japanese economy.

This embarrassing tale encapsulated three of Abenomics' biggest flaws: the dangers of persistent ultralow interest rates, the costs of weak corporate governance and the fallout from Japan's rapidly aging population.

Shizuoka prefecture-based Suruga had been touted as a regional-bank exemplar in recent years. While peers complained the Bank of Japan's negative-rate policies were decimating profits, Suruga posted record profits in the five years until March 2017, its consolidated net profit peaking at 42.6 billion yen ($389 million).

However, things were not what they seemed. Regulators found Suruga's methods of extending housing loans ran afoul of prudential norms. In April, as the media got wind of weak oversight at the 124-year-old bank, its shares dived. But as well as bad management, the mechanics of Abenomics were at fault. Negative rates, and negligible spreads, are squeezing bank margins and promoting some to engage in risky activity.

Banks, Fitch said in a Jan. 16 report, "have increased lending toward riskier companies in order to cushion profits in a negative interest rate environment." As a result, Fitch says, capital adequacy ratios "have been declining" and posing "financial stability risks when the economy is likely to slow in 2019." 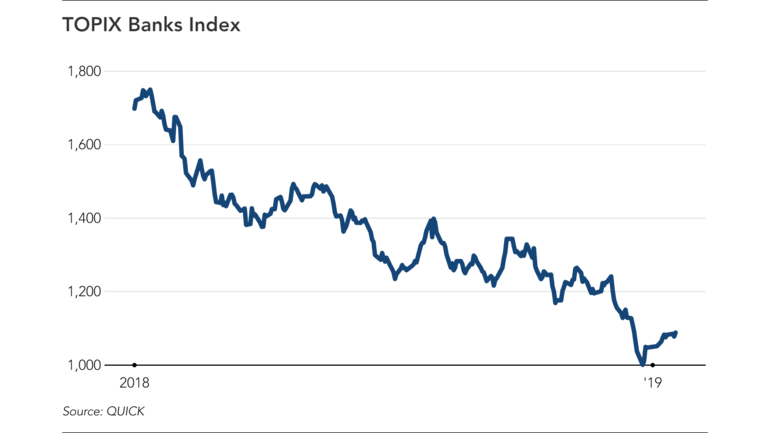 It has been years since such concerns were raised about Japan. And there are specific reasons to worry. One is how Japanese banks in general gorged on loans made by highly-indebted U.S. companies.

In a December report, UBS detailed how banks looking to boost profits loaded up on so-called collateralized loan obligations, or CLOs. Cracks are appearing in what has been one of Wall Street's premier investment pitches in recent years. Japanese institutions have been particularly enthusiastic buyers, pouring into AAA-rated segments of a $1 trillion market. UBS reckons Japanese banks own about one-third of CLOs.

Clearly, we are not talking about a repeat of the 2008 financial crisis. It was collateralized debt obligations, or CDOs, that proved Wall Street's undoing amid the turmoil in subprime mortgages, not corporate loans. But recent dislocations in equities have hit the U.S. loan market hard.

Concerns about losses could have a chilling effect on Japanese banks. "Leveraged loans have supplanted junk bonds as the home for more risky credit," say analysts at UBS. And the question is whether trouble in lower-rated parts of the market will bleed into the AAA loans on Japanese balance sheets, making banks even less confident about lending, including at home.

In 2019, Fitch expects 2% loan growth in Japan, largely unchanged from 2018. Significantly, though, that is down from 3% in 2017. The credit engine the BOJ is trying to fire up is cooling down. Moreover, the trade headwinds could make Fitch's 2% forecast look optimistic. Bear in mind the government's plan to raise the sales tax to 10% from 8% in October and you have a recipe for slowing growth and even less chance of achieving Abe's reflation goals.

Last October, the BOJ warned of threats to bank balance sheets as the zero-rate policy Gov. Haruhiko Kuroda launched in April 2013 gets extended seemingly indefinitely. It was the first such warning of the Kuroda era, and came at a precarious moment for the global financial system. It came just as Trump's trade war hit China, and investors learned Japanese gross domestic product contracted 2.5% in the third quarter.

The question now is how Japanese banks, particularly smaller, regional ones, respond. Thanks to negligible spreads between government debt issues and razor-thin margins, 70% of regional institutions posted net losses or profit declines between April and September. Given the uncertain terrain ahead, the BOJ said on Oct. 31 that "it is necessary to pay close attention to future developments."

At a minimum, that means short-term rates at -0.1% and long-term borrowing costs near zero are here to stay. It also could mean further BOJ action. If the downshift in third-quarter gross domestic product carried over into the fourth, Kuroda's team will be under renewed pressure to avert a recession.

Trump, meantime, is threatening 25% tariffs on imports of all cars, including from Japan. That might make Japan Inc. even less confident about boosting wages, further setting back the BOJ's efforts to generate 2% inflation. Economists generally expect the Jan. 23 board meeting to end with yet another cut in inflation forecasts for the fiscal year (it is currently 1.4%).

As the BOJ keeps the monetary spigot open, banks might have even less confidence to channel funds in conventional ways, such as growth-boosting domestic business loans, and opt for riskier investments.

In a Dec. 23 story, the Nikkei Asian Review quoted a BOJ official acknowledging that "prolonged low interest rates are an indirect cause of the Suruga Bank scandal."

Another indirect cause: opaque corporate practices that show Japan has not absorbed the lessons from past crises such as the Kobe Steel scandal. The BOJ has derided Suruga's sloppy housing-loan standards as unacceptable (warranting a six-month business suspension order).

Finally, demography is also at play.

With about 100 financial institutions in Japan, rural communities are decidedly overbanked. Both Abe and Kuroda have urged industry consolidation, an example set by last year's union between Fukuoka Financial Group and Eighteenth Bank. Yet even bold mergers are unlikely to achieve what the BOJ most wants -- the deployment of credit to revive Japan's animal spirits -- when the pool of potential entrepreneurs is aging.

As global events and BOJ policies further squeeze profitability, might more banks go the Suruga route and, as Fitch puts it, "encourage excessive risk-taking?" Time will tell. But, if the 2019 proves as difficult as forecast, there may not be long to wait.