To save Myanmar, first crush its economy Black smoke billows from the industrial zone of Hlaing Thar Yar in Yangon on Mar. 14: the last straws for investors.   © Reuters
CopyCopied

Mark Brown is an independent policy analyst who has worked on Southeast Asian politics and economics over the past decade.

The aftermath of the Feb. 1 military coup in Myanmar has steadily paralyzed the country's economy, already crippled by harsh COVID-19 lockdown measures.

It is time to finish the job. Across the country's cities and towns, most banks are shut, ATMs empty, stores closed and factories empty. The internet, save for Wi-Fi, is cut off. A year of the COVID-19 pandemic already left Myanmar's economy battered. The coup brought the economy to a halt as Myanmar's public took to the streets and the world recoiled from the junta's brutality.

One of the last frontiers for investment in Asia, Myanmar is seeing foreign investor sentiment quickly dissipating, while the civil disobedience movement has successfully derailed the junta's ability to control and sustain the economy.

The main ports of Yangon are operating at 10% capacity, and over 150 companies -- domestic and foreign -- are backing an advocacy campaign opposing the coup, as well as domestic boycotts of military-affiliated companies such as Myanmar Brewery and telecoms operator Mytel. Foreign companies including Toyota Motor, Puma Energy and Woodside Petroleum have withdrawn or suspended operations. Others that had partnered with the Myanmar military, such as Japanese beverage group Kirin Holdings which has an alliance with a military-affiliated company, have ceased joint ventures .

The burning of numerous Chinese factories in Yangon on Mar. 14 was undoubtedly the one of the last straws for any investor willing to bet their capital on Myanmar's future. We can expect a large exodus of foreign businesses, especially smaller and medium-sized enterprises that want to save whatever they have left.

The junta tried to reassure Myanmar's public -- and the world -- that it would maintain the country's existing economic policies, promising business leaders immediately after the coup that all would be well. But the junta's claims of continuity in economic policy are farcical. 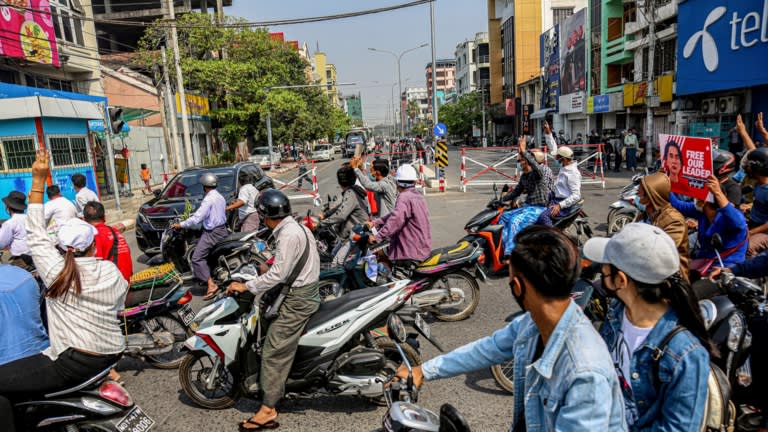 Motorcyclists ride past a barricade during an anti-coup demonstration in Mandalay on Feb. 26: the coup brought the economy to a halt.   © Sipa/AP

They simply have no basis when the scale of public resistance to military rule is so extensive and the scale of violence is escalating so rapidly. The junta's latest moves, including threatening banks with the prospect of forcibly transferring their deposits to state-owned banks, suggest they know how quickly the situation is deteriorating.

If the military is able to consolidate power, everyone will suffer. The signs are already there: the dramatic contraction of the financial sector, the banking crisis, lower manufacturing output and plummeting investment. The increased instability and global isolation inherent when a military government uses violence, corruption and other coercive means to maintain power means that whatever rudimentary economy is left will be manipulated only for the military's benefit.

Since the coup, it has been argued by some international observers that sanctions, or economic pressure more generally, should be limited -- or even avoided -- to protect Myanmar's public. But the argument that there is a trade-off between harm to Myanmar's people and pressure on the military is false.

The hard truth is that the population is going to suffer more from the worsening conditions -- social and economic -- so long as the military is in power. Given this reality, and how quickly the overall situation in Myanmar is deteriorating, the most expedient way forward is to bring as much pressure on the military's economic interests to achieve two objectives as quickly as possible.

First, the international community can force the military to understand that they would be better off relinquishing power by targeting their two major conglomerates -- Myanma Economic Holdings Public Company Limited and Myanmar Economic Corporation -- and their joint venture partners. Second, sanctions -- especially on natural gas exports -- can increase the cost to the military's international enablers to the point where it is no longer worth supporting the regime.

This requires making hard decisions: eliminating favored trade status; reducing access to foreign currency, especially the dollars; boycotts on the few remaining exports, particularly those which come from military-sponsored or affiliated enterprises; putting oil and gas revenues into escrow; the imposition of trade sanctions on imports.

International actors should avoid actions that might artificially prop up the economy, and offer only humanitarian aid, such as pandemic response and food security via independent civil society organizations or members of the ousted government that was elected in November and have now established the Committee Representing the Pyidaungsu Hluttaw.

The faster and more complete the economic collapse, the sooner the military and its potential international enablers will understand the pain this coup has brought them. This is what Myanmar's protesters are asking the world to do.

For the harsh reality, recognized and demonstrated by the millions of Myanmar people risking their lives to protest, is that short-term pain will be worth it if the junta fails quickly. The coup cannot succeed if perpetrators cannot maintain control of the economy. The sooner the junta collapses, the sooner foreign investors can return to a viable prospect in Myanmar.

Myanmar's people suffered under military rule for over five decades. The last decade was a heavily conditioned attempt at power-sharing between the military and an elected civilian government. In the end, the military could not abide by the rules of the game that they themselves established in writing the country's 2008 constitution.

Myanmar's people deserve to be free of tyrannical military rule once and for all. The world should support Myanmar's people in this effort, even if that means hard decisions must be made.