Tokyo exchange failure shows why Japan's own stock is falling An empty trading space after the TSE suspended all trading due to system problems on Oct. 1: investors were questioning the reliability of a market that seems unready for prime-time.   © Kyodo
CopyCopied

When Asia's biggest equity bourse suddenly has the same transactional opacity and questionable security as the famously shadowy asset class, investors almost have to figure, why not place a bet? Ethereum, Binance Coin, Zcash, TSE-listed shares -- what is the difference when trading can be halted so suspiciously?

Yes, some hyperbole here. But it is quite a feat to generate simultaneous trending in cyberspace with Monty Python ("It is just a glitch!"), Trading Places ("Turn those machines back on!), The Simpsons (D'oh!) and The Matrix ("Woah!").

Still, this bull market in unfortunate metaphors is well earned.

The glacial and murky way TSE officials explained how one of the world's top exchanges had failed the same day the Bank of Japan released major data was a terrible look for a Tokyo trying to restore its status as a global financial center. The best Yoshihide Suga's new government, one pledging a financial Big Bang, could muster was a perfunctory "it is regrettable." 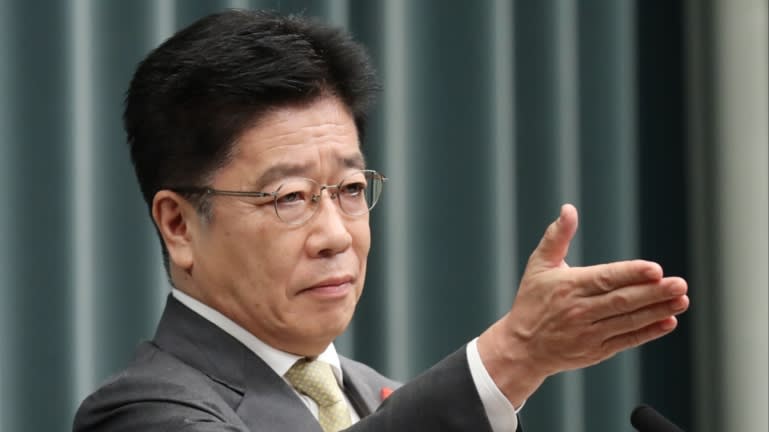 Chief Cabinet Secretary Katsunobu Kato attends a press conference on Oct. 1: the best Suga's new government could muster was a perfunctory "it is regrettable." (Photo by Uichiro Kasai)

What is really regrettable is how Japan has squandered the past eight years of supposed reform under Shinzo Abe. Or, depending on your perspective, the past 15 years.

Investors could not help but channel 2006, when Tokyo exchange computers got overloaded, halting trading. That came just months after a four-and-a-half-hour shutdown in 2005 thanks to a botched system upgrade.

Onward and upward, was the zeitgeist. In January 2010, the exchange shifted to Fujitsu's Arrowhead system. That did not keep a 2012 computer snafu from stopping dealing in nearly 250 securities, or a system crash that knocked out derivatives trading later in the year.

The name of Fujitsu's matrix would prove ironic as Abe came to power promising to fire three policy arrows at Japan's chronic deflation and dysfunction. One of the few to hit the target was tightened corporate governance. That matters little, though, if the most prominent expression of Japan Inc.'s health -- stock indexes -- can still fail in spectacular fashion in the year 2020.

Nor does the "was-TSE-hacked" chatter in financial circles help. Context and timing are important parts of this tale. The context is that earlier this year New Zealand's exchange was halted by cyberattacks. The timing could not be worse with Japan mired in recession.

BOJ Governor Haruhiko Kuroda cannot be happy either. Because Abe's arrows went off course, the onus is now on the central bank to boost growth and confidence. Its primary avatar was stocks, with Kuroda setting the public mood via epic purchases of exchange-traded funds.

This "wealth effect" strategy now suffers untimely parallels with Monty Python's Brazil. That 1985 film centered on a dystopian world overly reliant on poorly maintained machines that demonstrate the cracks in a bureaucratic, top-down political system. It is hard not to see the TSE's stumble as a sequel.

"This glitch exposes the risk of investing in Japan and the hubris of bullish advisers and hedge fund managers who seemingly avert their eyes from the shortcomings and bang on about the chimera of corporate governance reforms," says Jeff Kingston, head of Asian studies at Temple University's Tokyo campus. "Risk management here remains unrealized and cybersecurity is a joke."

Taro Kono found himself trending on social media recently for all the wrong reasons: trying to get Tokyo to give up fax machines. Prime Minister Suga's administrative reform point man inspired memes depicting an analog government in a fifth-generation, or 5G, mobile technology era.

The problem with Suganomics, it seems, may end up being the same as Abenomics: too much macroeconomic cheerleading and too little retooling at the micro level. Suga presents Abe with flowers on Sept. 14: the problem with Suganomics may end up being the same as Abenomics.   © Reuters

Abe's tenure -- from December 2012 to September 2020 -- was heavy on aggressive stimulus, light on structural change. Just like the TSE, which reveled in surging the Nikkei Stock Average and the Topix indexes while the wiring and plumbing below it all proved faulty. Again.

Suga's focus on mobile phone bills and regional bank consolidation sounds nice. But given the COVID-19 hit to exports, industrial production and wages, Suga's full focus is likely to be on short-term stimulus efforts, not on implementing the bold reforms Abe avoided for 92 months.

Japan's notorious bureaucracy needs a top-to-bottom revolution. Starting with hiring better people. Until April 2019, Japan's cybersecurity was headed up by a 69-year-old man who admitted he had never used a computer. Nor is Finance Minister Taro Aso, 80, known for his tech-savvy or out-of-the-box thinking.

On a very basic level, TSE's stumble shines a bright spotlight on the need for network planning, backup systems and cyber integrity. While TSE insists it was not hacked, cyber intrusions are state-sponsored enterprises in China and North Korea, never mind the odd ransomware scammer.

How ready is Japan Inc.? Its communication system is antediluvian. The investors Tokyo is trying to woo as China stifles Hong Kong were left confused and aghast for too many hours last Thursday, and questioning the reliability of a market that seems unready for prime-time. It is unthinkable that a top-three exchange could just up and shut down for a full day.

We can debate whether the Monty Python folks or the Marx Brothers would run TSE better. For now, though, it is no wonder why cryptocurrencies are trending.