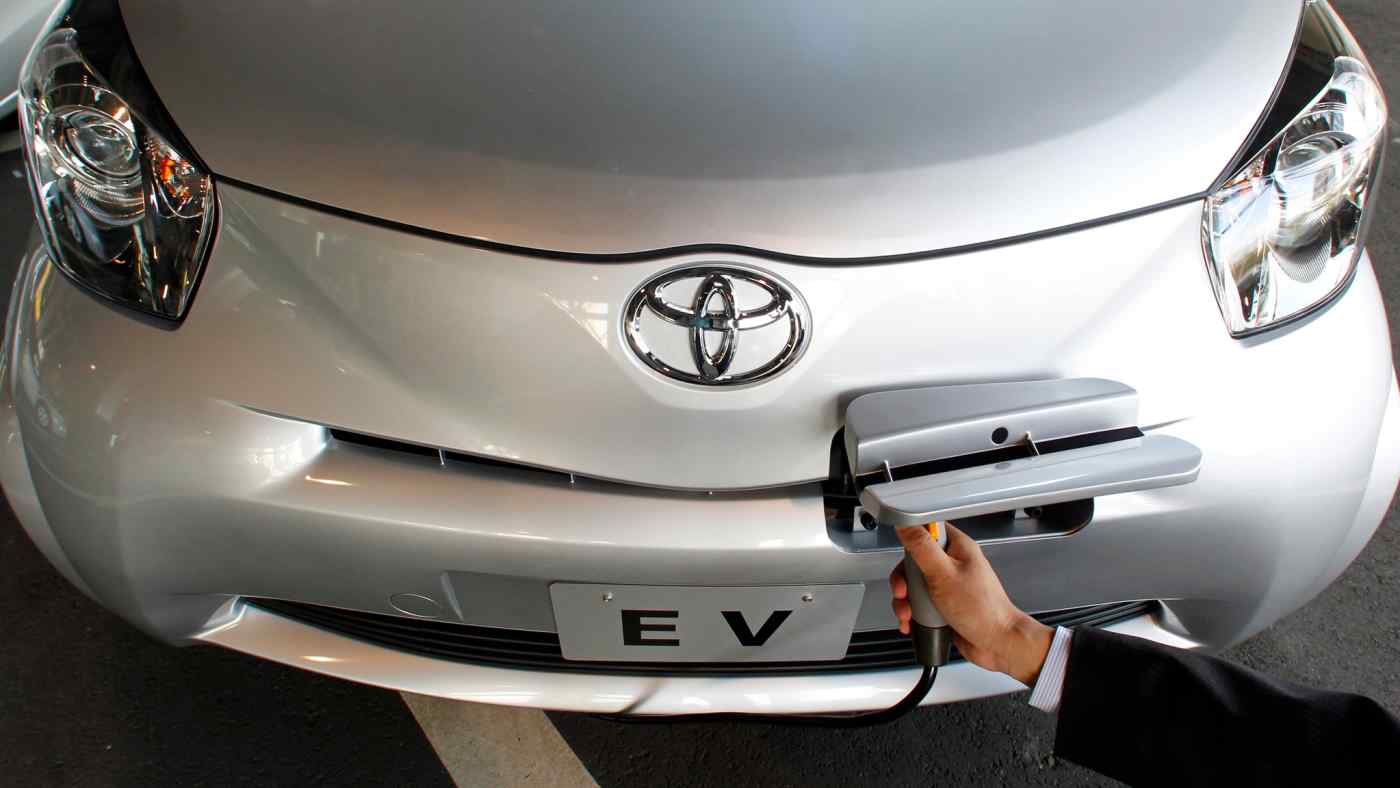 As Shinzo Abe looks to recharge Japan's economic batteries, Toyota Motor and Panasonic are showing him how.

The two Japan Inc. icons set up a joint venture to develop electric vehicle power sources -- a wise move targeting a 21st century energy technology that is full of potential.

Unfortunately, it is a million megawatts removed from the plans of Prime Minister Abe's Liberal Democratic Party, which remains wedded to an increasingly-obsolete 20th-century energy technology -- nuclear.

Since 2012, a centerpiece of Abe's "Japan is back" push has been hawking nuclear technology that the world just isn't buying. In recent weeks, Hitachi's grand plan to build two reactors in the United Kingdom went awry amid surging costs. Mitsubishi Heavy Industries had a similar comeuppance in Turkey; Toshiba in the U.S.

Luckily, Toyota and Panasonic are providing a timely case study for Abenomics architects seeking a reboot. These two national champions -- one in autos, one in batteries -- are pooling resources to raise their competitive game. Neither has disclosed investment amounts for a venture of which Toyota will own a 51% stake to Panasonic's 49%. The joint venture will focus on research and development, product engineering and manufacturing.

The tie-up will help Toyota, which has been slower than many peers to embrace EVs, a chance to play catch-up. And to lower costs, as the battery can account for as much as 40% of car's price. It provides a laboratory, too, for Toyota's flying-car ambitions. Light, powerful and safe batteries are crucial.

For Panasonic, this is an opportunity for a famous Osaka name now in its 101st year to reinvent itself again. In the early 2010s, it bowed to reality and abandoned the plasma-screen market in favor of batteries and solar technology. By 2014, when Tesla's Elon Musk set up a $5 billion lithium-ion gigafactory in the Nevada desert, Panasonic was one of the first calls he made. Panasonic still leads the global market for rechargeable lithium-ion batteries. But victory is not assured. President Xi Jinping's "Made in China 2025" scheme is throwing hundreds of millions of dollars at batteries and other renewable energies. Companies headed by Contemporary Amperex Technology (CATL) and BYD are building gigafactories. Fujian-based CATL could surpass Panasonic's market share in 2020 if Panasonic is not careful.

But if there is any sector that puts quality and reliability above cost, it is transportation networks. And since China's thrust is from the top-down via government decree, whereas Japan's is ground-up, the Toyota-Panasonic project has odds of winning the market. At the very least, mainland competition will spur Japan Inc. to go the extra mile on design and performance.

But the promise is much bigger -- if Abe's team has the audacity to see it.

Abenomics, remember, is less an innovation than a collection of upgrades Tokyo should have tackled 20 years ago. Rather than upset vested interests, the LDP unleashed a stimulus revolution. That meant zero interest rates and an explosion of public-works projects.

Abe promised a big bang to reignite Japan's innovative spirits and lean toward the future. Mostly, though, he prioritized old-school Bank of Japan easing over supply-side reforms. He failed to deliver on promises to deal with structural problems including rigid labor markets, chronic bureaucracy, and the gender-pay gap. On energy he didn't even announce a worthwhile plan.

Nuclear is the wrong approach as voters from Germany to South Korea reject reactors. Thanks to the political fallout from Fukushima, the domestic market essentially no longer exists. And yet, the nuclear lobby remains strong -- a nexus of pro-reactor CEOs, lawmakers, academics and investors.

Even SoftBank's Masayoshi Son has had his share of run-ins with Japan's answer to America's military-industrial complex. His post-Fukushima bid to invest billions of dollars in solar fields made little sense because bureaucrats would not allow Japan's richest man to access power grids. So Son pivoted to India and elsewhere.

Much of what Japan did well these last 70 years is being commoditized. South Korea is making better and better cars and ships. China is investing in leading-edge robotics and electronics. India's entrepreneurs are racing ahead in the "fintech" space. It follows that Japan's future will be less about manufacturing and me-too technologies than other options. Since it is unremarkable in services, new forms of energy are a way forward.

If Abe wonders what Toyota and Panasonic intend, he need only check in with his mentor Junichiro Koizumi. Since leaving the premiership in 2006, Koizumi, 77, has been switching from reactors to batteries.

Last year, Koizumi allied with anti-nuclear lawmakers calling for an "immediate halt" to the reactor business. He has more than safety in mind. He argues that winning a bigger piece of the renewable-energy boom would boost wages, increase productivity and restore Japan's status as an innovator. He says: "Japan can grow if the country relies more on renewable energy."

Toyota and Panasonic are playing a long game that should inspire rivals and lawmakers alike. It plays to a historic strength. Since Kyushu University developed the dual carbon battery in the late 1970s, Japan has been a key force. Japan Inc. should focus greater attention on high-range batteries for everything from cars, airplanes, ships, rail systems, homes to commercial buildings.