Toyota's decision to pull all its TV ads is catching on

Toyota's call on the Games is a bow to reality.   © Sipa/AP
CopyCopied

Japan's Deputy Prime Minister Taro Aso really had it right last year when he called Tokyo 2020 the "cursed" Olympics. What seemed at the time just another foot in the mouth of a politician notorious for gaffes now feels like an understatement as Japan Inc. abandons these Titanic Games.

The cursing in Tokyo this week is less supernatural than it is the kind considered unprintable in a family newspaper. Debate all you want which epithet best suits Toyota Motor's slap in the face to the International Olympic Committee.

The ninth-inning "out-of-here" by Japan's most iconic global player and top Tokyo 2020 sponsor is quite a blow. It is also a reminder that the real public relations disaster may come after the five-ring circus leaves town.

Toyota CEO Akio Toyoda clearly sees where the wind is blowing ahead of Friday's opening ceremony as COVID-19 thrives. The IOC's lame efforts to spin away the dearth of public support are for naught. All too many of Japan's 126 million people want the Tokyo Games further postponed, or canceled.

Toyota's volte-face is catching on. Bridgestone is also pulling ads from the Olympics, and top executives at Nippon Telegraph & Telephone, Panasonic, Fujitsu and NEC will join Toyoda in skipping the opening ceremony and other events. Also taking a stand by bailing on the stands: Meiji Holdings, Asahi Breweries, Nippon Life Insurance and Sumitomo Mitsui Financial.

Granted, there is a better-late-than-never dynamic at play here. What if top CEOs months ago voiced strong concerns about holding this event during a pandemic -- and called for additional contingencies? Tokyo 2020 could just as well have been held in 2022, when Japan's vaccination rate would at least be at U.S. levels.

It is great that SoftBank Group's Masayoshi Son spoke out earlier. Ditto for Rakuten's Hiroshi Mikitani. But with all due respect, these tech-industry gents lack the punch of the Japan Inc. economy's meteoric postwar surge back when Tokyo hosted the 1964 Olympics.

Here, the "what-about-the-costs-of-another-delay?" retort rings hollow. By starting the Games this week, the IOC has ensured that Tokyo 2020 will be remembered for the surrounding chaos and atmospherics -- not the sports or medals. This has cost already Japan its big kumbaya moment in the global spotlight. And should the delta variant emerge as the real record-holder, the costs to the nation's soft power are, for now, incalculable.

Controversies differ accounting to the audience. News that Keigo Oyamada, a Japanese composer whose music is part of the opening ceremony, resigned over accusations of a bullying past is not a big headline outside Japan.

Earlier sexist gaffes by then-organizing committee head Yoshiro Mori and others, though, were teapot international incidents. So was Aso's cursed comment. His reference connected the dots to the cancellation of the 1940 Tokyo Olympics.

But there is nothing lost in translation about Toyota veering away from this spectacle. Granted, Toyota has had a rough month. In late June, U.S. media jumped all over disclosures that the company had resumed giving money to Republicans who tried to keep a defeated Donald Trump in the White House.

News that Toyota was the biggest donor to the insurrectionists accorded it pariah status among 20-something Americans -- hopefully temporarily. The under-30 generation already has less interest in cars than previous ones. Clearly seeing where those winds are blowing, Toyota responded by saying it would stop supporting Trumpian factions.

Toyota's call on the Games is a bow to reality. The athletes have already been upstaged by the political drama surrounding Tokyo's COVID Olympics. So, arguably, have hopes that the 68 Japanese companies that raised $3 billion for the Tokyo 2020 organizing committee can harness it in any meaningful way to sell goods or protect brand loyalty.

In fact, there is a risk of backlash. And not just for Japan Inc., as this column has argued before.

The big hope was that Tokyo 2020 would re-create the 1964 magic. That triumphant return to the world of industrialized nations also showcased the technological capabilities that would make Toyota, Sony, Toshiba and others global case studies in the Japanese boom to come.

Since scoring the Games back in 2013, Japan spared no expense to outdo 1964. Odds are it would have, if not for the pandemic. But now the paranoid theatrics around this event -- and possible epidemiological fallout -- could have Japan answering uncomfortable questions for years. Rather than burnish Japan's soft power, the Olympics could threaten its global standing.

It is even worse for the IOC, which put Tokyo in this no-win situation for three reasons: money, money, money. Really, the best thing Tokyo 2020 can do these next few weeks is keep Thomas Bach as far away from the microphones as possible. 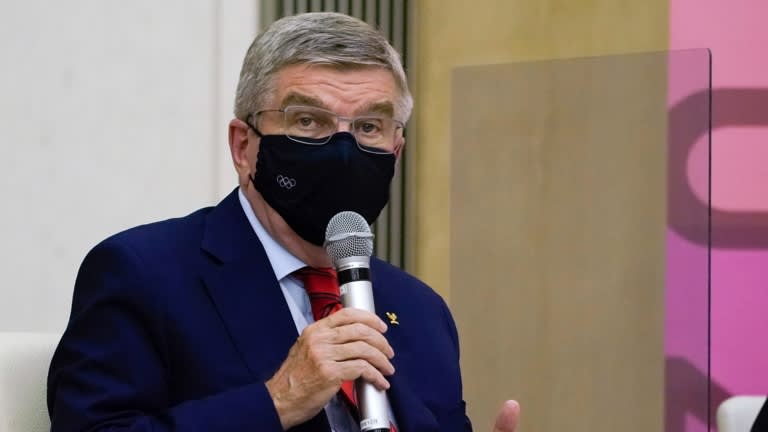 Thomas Bach, pictured on July 15: the best thing Tokyo 2020 can do these next few weeks is keep the IOC President as far away from the microphones as possible.   © AP

Yes, Toyota and peers are finally getting it right in the end. But the real PR fallout may begin Aug. 9, the day after the closing ceremony -- when the circus packs up and rolls elsewhere.

Hopefully, the only souvenirs visitors take home will be local trinkets. Not something requiring medical attention.