As 2020 is an election year in the U.S., Modi knows that Trump is looking to leverage made-for-television foreign visits for his domestic political image. But Trump's long-awaited India trip is not just a feel-good spectacle: the Modi government has been working round the clock to finalize a bilateral trade deal that settles outstanding disputes, but Trump has been stubborn and indicated that he is "saving the big deal for later."

Both sides have outsized ambitions for their relationship, which they hope this trip will advance. But whether they can achieve a geopolitical breakthrough on the issues that matter most -- trade, defense, China -- is far from clear.

With just over eight months before Americans decide Trump's political fate, the Indian side understands that nothing matters more to Trump the populist than demonstrating to the American public that he is scoring trade wins against all U.S. economic partners.

He has already concluded revised trade deals with Canada and Mexico, Japan, China and South Korea and declared that "the next thing could be Europe." India is the last remaining major trade partner of the U.S. -- bilateral trade in goods and services is over $150 billion -- which Trump would like his voters to see as "falling in line" as a result of his hawkish trade wars.

But India is no pushover and it has negotiated hard with the U.S. on a variety of tariff items ranging from agricultural products and mobile phones to medical devices and aluminum. American corporate grievances over India's data localization and e-commerce pricing rules have crept into the bargain, but Trump is unlikely to extract a surrender from India. 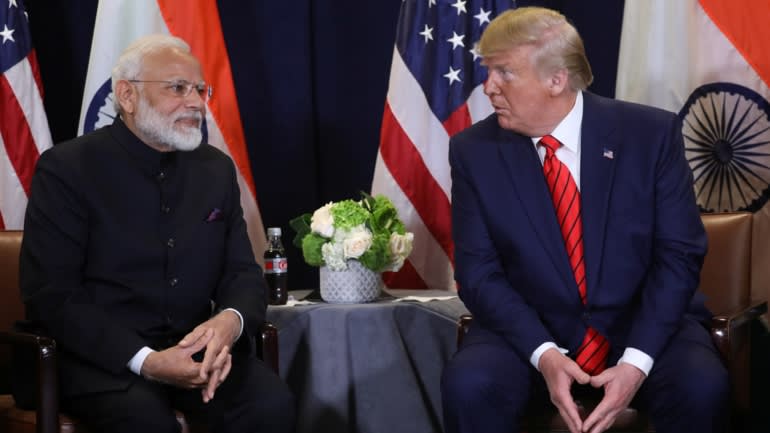 Donald Trump holds a bilateral meeting with Narendra Modi in New York City on Sep. 24, 2019: India has negotiated hard with the U.S.   © Reuters

Modi is politically more secure than Trump at present, but the Indian leader has to manage multiple domestic concerns against the backdrop of a slowing economy. Restoring in some form India's trade privileges through the Generalized System of Preferences, which Trump canceled after refusing to recognize India as a developing country, would be a valuable take-away for New Delhi.

Fresh orders from India for American oil and gas as well as attack helicopters, missile defense systems and lethal drones do matter. The U.S. civilian goods trade deficit with India might shrink from $23 billion, and the bilateral military trade target of $25 billion may be achieved in coming years if Trump and Modi do manage to ink the still elusive final trade settlement.

All this sounds like progress from a populist American perspective, but for Modi the test is the wider geopolitical potential of the India-U.S. strategic partnership. Much to New Delhi's disappointment since 2017, Trump has dampened the strategic spirit with his narrow transactional redefinition of American foreign policy priorities.

Modi's tweet welcoming Trump to India stressed that a robust U.S.-India partnership "augurs well not only for our citizens but also for the entire world." This can be read as subtle criticism of Trump's lack of commitment to counterbalancing an ascendant China through a multilateral coalition of countries in the Indo-Pacific region.

Although Trump administration officials keep doing the rounds to reassure allies and partners that the U.S. will check China, whose ruling Chinese Communist Party Secretary of State Mike Pompeo called "the central threat of our times," there has been little concrete American action.

Japan and South Korea, two U.S. treaty allies, are at loggerheads. The Philippines, another U.S. treaty ally, has scrapped its Visiting Forces Agreement with the U.S. in deference to China. India, while benefiting from American military equipment sales that bolster its surveillance capabilities of Chinese submarine intrusions into the Indian Ocean, doubts that Trump will spare American troops and taxpayer money to push back China's expansion.

Trump's imminent troop drawdown from Afghanistan and his whipsawing approach to restraining Pakistan's sponsorship of jihadist extremism remind Modi that he cannot rely on Washington to enhance India's regional heft.

This situation is unlikely to improve even if a Democratic Party candidate wins the U.S. presidency in November. The winds of isolationism and populism are blowing in both the right-wing and left-wing camps of American politics, and India is not expecting a return to the bygone era of U.S. liberal internationalism and strategic generosity.

So, notwithstanding the pomp and pageantry of Trump's visit, New Delhi will be hedging its foreign policy by avoiding conflict with China and looking for alternative coalitions and institutions that can help fill the security vacuum being left by a retreating U.S.

Trump will bask in the spotlight of Modi's memorable welcome in India. But do not hold your breath for geopolitical breakthroughs. Soaring dreams of a defining partnership between India and the U.S. to remake the world order are shelved for the foreseeable future. Bilateral deal-making without altering the Asian balance of power will be the new normal. It is time to lower one's sights and carry on.

Sreeram Chaulia is a professor and dean at the Jindal School of International Affairs in Sonipat, India. His latest book is "Trumped: Emerging Powers in a Post-American World."