Region right to prepare for rough waters and choppy markets Stabilizers such as rate cuts or fiscal stimulus measures are no match for the headwinds Trump versus Xi is generating.   © Reuters
CopyCopied

Last month, Malaysia's central bank cut its benchmark interest rate for the first time since July 2016. Its 25 basis-point cut to 3% was a telltale sign of mounting global risks. Now, markets are buzzing about possible easing steps in China, Indonesia and elsewhere amid growing collateral damage from the U.S. president's tariffs.

Not since the 2013 Fed "taper tantrum" has so much capital fled emerging markets. The roughly $15 billion of equity outflows from markets in emerging economies in May alone could accelerate as manufacturing activity turns negative.

Purchasing-managers' indexes in Malaysia, Taiwan and South Korea have dropped below the 50-point mark signaling contraction, and they are heading that way in Vietnam (Japan also is below 50).

Most worrisome, China, Asia's key growth driver, is at 50.2 just as Trump's tantrums gain intensity. Details below the headlines in the Caixin/Markit Manufacturing Purchasing Managers' Index for May show that as output slips, factory prices are stalling. Businesses were the least cheerful about production plans since the survey's launch in April 2012. Investors may be front-running the data. In April and May, roughly $12 billion of foreign capital left mainland stock bourses, the biggest outflows since 2014. That was the year Beijing rolled out its China-Hong Kong stock connect program to direct more investment to mainland companies. Five years on, the flow is moving in the other direction.

Economists including HSBC's Jingyang Chen think the People's Bank of China "will double down on easing for the private corporate sector." What is more, says economist Aidan Yao of AXA Investment Managers, "almost everywhere, the race is going to be to the downside." 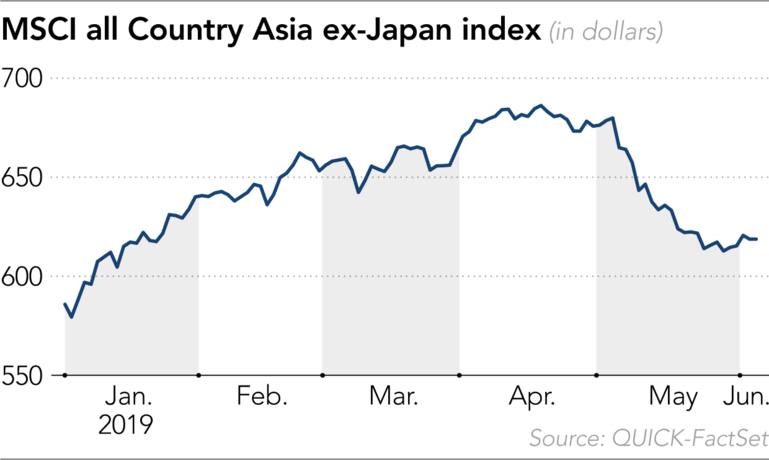 Look no further than Bank Indonesia. After assertively hiking rates six times to 6% in 2018, Governor Perry Warjiyo says there is "room for accommodative monetary policy." And while Australia is not an emerging economy, this week's rate cut -- 25 basis points to a record low 1.25% -- was its own ominous sign. The developed world knows no bigger leveraged bet on Chinese demand than resource-rich Australia.

Meanwhile, Trump's Fed-bashing campaign is wearing down Powell & Co., which tightened four times in 2018, much to Trump's chagrin. On Tuesday, Powell signaled a willingness to ease to alleviate harm from the trade war. But monetary moves alone will not be enough to shield Asia from the Trumpian tantrums to come. Last week, America's protectionist-in-chief threatened taxes of between 5% and 25% on imports from Mexico. This week, he stripped India (which also has shifted into easing mode) of its special dispensation from tariffs. He previewed a crackdown on visas for Chinese students.

Not to be outdone, President Xi Jinping's government warned mainlanders against travel to the U.S. Beijing cited everything from potential harassment to racial tensions to gun violence, hitting Trump's nation in one of its softer targets: Chinese tourism dollars. There is also increased chatter about Beijing shutting the spigot of "rare earth" materials vital to making iPhones and other technologies.

On Sunday, Xi's government hit Trump's with a report blaming the White House for upending global supply chains. Beijing says it will not back down on "major issues of principle."

Asia's other emerging markets are in an impossible position as the world's two biggest economies brawl. Central banks can cut rates and governments can gin up short-term stimulus spending. But such stabilizers are no match for the headwinds Trump versus Xi is generating.

Emerging Asia, says economist Udith Sikand of Gavekal Research, cannot easily extricate itself from Chinese supply chains. "China's manufacturing value-added is about 50% larger than that all of other EMs put together," he says. "Since the U.S. seems to be pursuing a multi-front trade war that aims to return production to home territory, it is hard to identify relative winners among EMs and tough to argue that they may benefit from either organic earnings growth or a valuation pickup."

The case for piling back into emerging-market assets may now rest on a Trump-Xi truce. Hopes one might be forged at the Group of 20 meeting later this month in Osaka are being dashed by the day. Odds are, Trump's legal woes at home will have him lashing out in even bigger ways on the global stage.

One wild card: a coming clash with Congress. The U.S. Senate, controlled by his Republican Party, signaled it may halt Trump's Mexico taxes. Might that have him going even bigger against China to save face?

Trump's move against Huawei Technologies is doing more to divide Asia than conquer China's tech threat. Even so, what is to keep Xi from directly targeting U.S. corporate jewels. If you think Boeing has had a rough few months just wait until Beijing announces an Airbus-only policy. Trump would then up the ante all over again.

That puts some of Asia's most promising economies in harm's way. Last week, Trump's Treasury Department surprised many by adding Malaysia, Singapore and Vietnam to its currency-manipulation watchlist. They join China, Japan and South Korea. What the three new entrants share in common is strong trade links with Beijing at a moment when the "America first" president desires complete fealty.

Such risks are the last thing developing Asia needs. Vietnam, for example, has been riding the wave of diversification away from China.

"The problem," Sikand says, "is that it could soon find itself in Trump's cross-hairs if labeled a currency manipulator, as last week it only narrowly avoided that label from a U.S. government report. Such uncertainty is, ironically, one reason not to bet on a wholesale shift of manufacturing away from China in favor of alternative emerging economies."

The answer for developing Asia is multitasking. As central banks and fiscal managers battle the coming downturn, governments must accelerate efforts to wean economies off exports. That means leveling playing fields for startups, strengthening human capital via improved education and training and forward-looking policies that increase competitiveness.

It is perfectly reasonable for central banks to resume their first-responder role. But as Morgan Stanley warns, an escalating tit-for-tat between the U.S. and China could push the world toward a synchronized recession within nine months. That leaves Asia without growth engines at a moment of growing peril.