Trump, sumo and the limits of strategic flattery 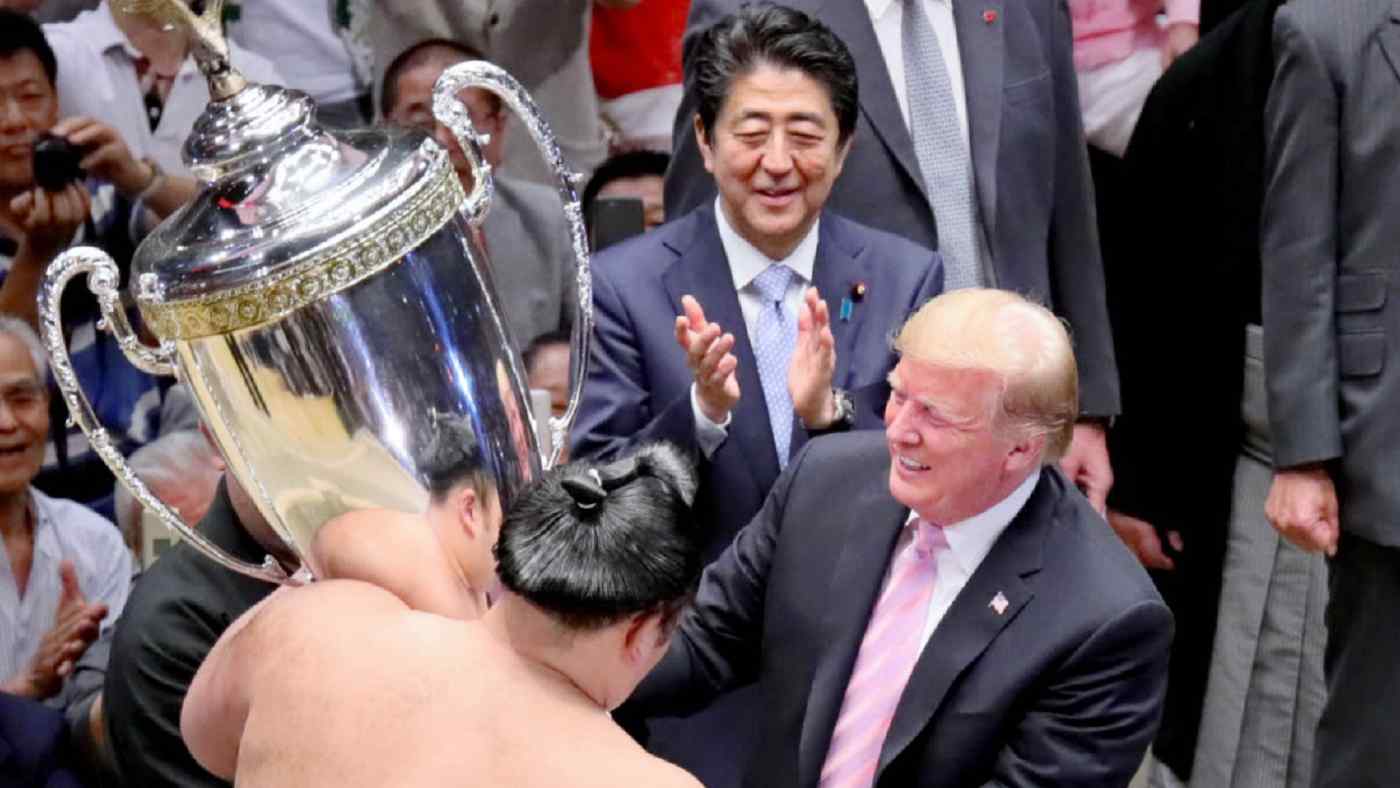 Trump presents the President's Cup to wrestler Asanoyama: there would be no limits to how far Japan's leader will go to stroke Trump's vanity. (Photo by Akira Kodaka)
CopyCopied

Donald Trump's recent visit to Japan was the culmination of a campaign by Prime Minister Shinzo Abe to sustain strong U.S.-Japan ties in the face of resistance from a mercurial American President who has persistently questioned the value of Washington's alliances.

Starting even before Trump formally took office with an unprecedented visit to Trump's transition headquarters just days after Trump's 2016 election, Abe and his team have devised a sustained, multi-dimensional strategy to deflect Trump's America-First driven instinct to brow beat and even denigrate American allies while praising the world's autocrats.

There would appear to be almost no limits to how far Japan's leader will go to stroke Trump's vanity: Abe's pitch to Trump in Tokyo that the new Japanese emperor's imperial investiture was "bigger than 100 Superbowls" and the dramatic break with centuries of sumo tradition created by the president's entry into the ring have lent a surreal quality to the Japanese prime minister's effort.

Abe is not the only leader to resort to strategic flattery. Trump's November 2017 visit to China was full of similar efforts to seduce Trump with lavish ceremony, including a first-ever dinner for an American president in the Forbidden City. During his trip to France in July 2017, French President Emmanuel Macron honored Trump with a Bastille Day military parade down the Champs Elysee. But these photo opportunities produced little substantive gain for either leader or their country, and relations in both cases quickly soured. Unlike South Korea, Japan is not in the cross hairs of Trump's demand for greater military burden-sharing. Although there has been some criticism in Japan from the opposition-leaning press, including the Asahi Shimbun which termed the visit "way over the top," the domestic reaction to the presidential visit has largely been positive -- at a minimum, a sense of relief that another bullet has been dodged.

But what are the long-term implications for U.S.-Japan relations of Abe's strategy?

Abe's game plan could easily be understood if his public loyalty to Trump translated into influence over the president's approach to policies that directly impact Japan. Yet, as we saw from Trump's cavalier dismissal of North Korea's sanctions-violating missile tests, there is little evidence that Abe's pleasing posture has had much impact on Trump's national security strategy. Trump's started by failing to consult closely with Japan before announcing the first summit with Kim Jong Un in June 2018 and has not changed his approach since.

Nor has Abe succeeded in using his loyalty to Trump (and Trump's ties to Russian President Vladimir Putin) to make progress on resolving the dispute over the Northern Territories, concerning islands occupied by Moscow at the end of the Second World War.

There seems little doubt that, given the turmoil in East Asia, the Japanese public continues to support strong U.S.-Japan ties. More than 80% of Japanese favor the U.S. over China as the world's leader, according to a Pew Global Attitudes survey. But favorable opinion toward the U.S. has dropped significantly from its highs at the beginning of the Obama Administration (85% in 2011 to 67% in the latest poll) and remains below the positive readings in South Korea and the Philippines.

There are worrying signs in the divergence between Japanese positive attitudes toward the United States and the Japanese public's mistrust of President Trump -- only 30% express confidence in the U.S. President -- (again, below South Korea and comparable to views in Australia and the U.K.). Japanese have always doubted that the U.S. takes Japan's interests into account in formulating policy, but this skepticism reached an all-time high in 2018.

The lesson here is that for most Japanese, partnership with the U.S. still remains the preferred choice -- given the alternatives of siding with China or trying to manage China's rise alone. The public's lack of enthusiasm for Abe's attempt to revise Japan's constitutional limits on the military, much less to develop its own nuclear capability, reflects Japan's reluctance to take on a more robust security role by itself in dealing with China.

But Abe himself has quietly hedged his bets -- with the decisions to go forward with the Comprehensive and Progressive Agreement for Trans-Pacific Partnership despite the U.S. withdrawal from the project, assiduously courting other partners in the region especially in South East Asia and India, and reducing frictions with China. In part this is a reaction to Trump's unreliability as a partner for Japan. Although the Trump Administration has postponed a reckoning on trade with Japan for now, there are strong hints from the President himself that the delay is only temporary. As the 2020 elections approach, the President may be tempted to press Tokyo hard to rally political support in the U.S.

But Abe's strategy also reflects long term concerns about a more inward direction of U.S. foreign policy, a trend that may continue even if Trump is not reelected. Several the Democratic presidential candidates have struck similar themes -- questioning the necessity of deep U.S. international engagement.

The prospect of less American interest in Asia, under either Republican or Democratic leadership, would leave Japan exposed. A policy of trying to accommodate China leaves Japan dependent on China's future good will. Assembling a coalition to balance China would require Japan to assume an unaccustomed leadership role, one that other essential partners, especially South Korea, may not easily accept.

For Japan then sustaining a strong alliance with the U.S. remains the most effective means to navigate the economic and security challenges of 21st century East Asia. The same is true for the United States -- but if America is serious, it must do its part to address Japan's concerns.

If the U.S., under Trump or a successor, continues to take Japan's support for granted while ignoring Japan's interests, the U.S. grand strategy for the Indo-Pacific, which depends so heavily on allied support for bases and operations, could become increasingly untenable. The only beneficiary of such a short-sighted approach would be China.

One can only hope that in private conversations with President Trump, Abe moves on from the sumo, eschews the flattery and uses his close personal relationship to speak truth to power. James Steinberg is a politics professor at Syracuse University and a former U.S. Deputy Secretary of State.