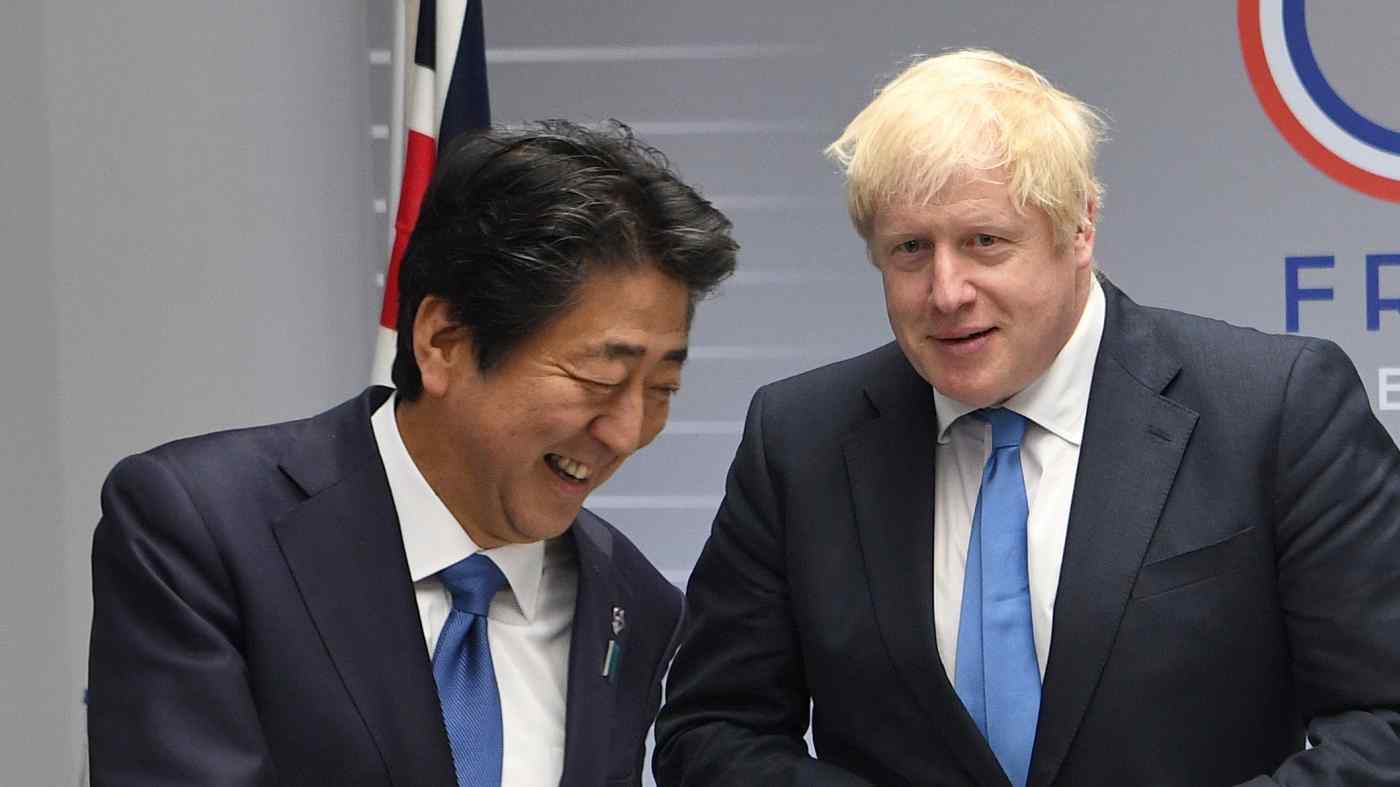 Boris Johnson meets with Shinzo Abe during the G-7 Summit in August 2019: a liberal trading arrangement is in the interests of both Japan and the U.K.   © Reuters
CopyCopied

Even before the COVID-19 outbreak blighted the global economy, the trading system was slowing, weighed down by tensions particularly between China and the U.S. and stuttering economic growth. The World Trade Organization now expects that world merchandise trade will fall by 13%-32% as a result of the pandemic.

It is a reminder of how interconnected the world economy has become in the era of globalisation. Contagion, whether as a result of economic, security or natural events, in one part of the globe quickly ricochets around the rest. But rather than developing the tools for dealing with unavoidably global problems, governments have taken refuge in either regional or national responses.

It is essential that we reverse the recent trends towards protectionism if we are to pull out of the steep dive in the trading system that the COVID-outbreak has launched us into. Now the U.K. has left the EU, it wants a satisfactory trade deal with the bloc, but it has priorities well beyond Europe and one should be putting a trade deal with Japan at the top of our list.

The U.K. wants to give attention to its potential membership of the Comprehensive and Progressive Agreement for Trans-Pacific Partnership, but it would also like the comfort of bilateral agreements that can be negotiated more quickly and are less susceptible to disruption by any single country.

The current Japan-EU Economic Partnership Agreement, or EPA, will not roll over after the U.K.'s transition period ends and so a new agreement will need to be put in place.

As the world's third and fifth biggest economies, a liberal trading arrangement is clearly in the interests of both Japan and the U.K. Over 1,000 Japanese companies operate in the U.K. and employ around 100,000 British workers. After the U.S., Japan is the second largest foreign investor in the U.K. at around 60 billion pounds ($73 billion).

During my time as U.K. Trade Secretary I held a number of extremely positive discussions with Japanese ministers and officials about how the U.K. and Japan could improve on the current EU EPA.

There are two major areas to focus on. The first is the crucial issue of data, where the EU position on localisation -- that data must be held on servers within the bloc -- has been an aggravating factor for many of the EU's trading partners. The U.K. does not share the EU position, being much closer to Japan on the issue in believing that in a modern economy it is necessary to move data as well as goods and services.

The second issue relates to the service sector, where both Japan and the U.K. are global players who would benefit from bilateral and multilateral liberalisation. The EU was always more focused on finished manufacturing goods and agriculture during its negotiations with Japan. Services, especially financial services, where Britain is a global leader, were relegated to a secondary issue. There are huge opportunities in putting this right.

It is worth pointing out that after the Global Financial Crisis, the Group of 20 countries in 2010 were operating around 300 non-tariff barriers to trade; by 2015 this number had almost quadrupled. A little bit of consumer protection here, a little bit of environmental regulation there -- imperceptible individually -- has led to a damaging silting up of the global trading system.

We need to reassert our basic belief in free, fair and open trade and back it up with action, including effective WTO reform. Failure to do so risks a reversal of the historic reduction in global poverty that has been achieved over the past generation. Such a failure would put pressure on global security, with increased internal political disruption and greater external displacement of migrants and refugees.

Since the U.S. exit from what was then the Trans-Pacific Partnership free-trade deal, Japan has played an important role in the global trading conversation. Both our nations want to see a more effective WTO; are committed to a rules-based system; and want to see further liberalisation in services and e-commerce.

Unlike many EU countries, the U.K. now has a strong government with a large majority that will last its five-year term of office and offer a stable basis for a bilateral and international partnership. The COVID-19 crisis may be occupying our attention now but there are many other problems waiting round the corner. We will be much stronger if we are able to act together.