US and China should fight coronavirus, not each other

Experience from SARS in 2003 shows long-term benefits of cooperation Donald Trump holds news conference on the coronavirus outbreak on Feb. 26: what might an effective global coordination program look like?   © Reuters

Many of us are appalled by the amount of energy the Chinese and U.S. governments are wasting on efforts to criticize each other over the COVID-19 crisis. Pandemic posturing has got ugly, and is now getting in the way of an effective worldwide response. Instead of finger-pointing, leading world governments should be banding closer together, including through the G-20, to urgently develop a common plan of action.

In 2003 I was the senior action officer at the U.S. Embassy in Beijing in charge of coordinating America's in-country response to the SARS epidemic. We faced three challenges: helping U.S. citizens weather the crisis; convincing the Chinese government to share information; and providing technical and scientific support to China's health authorities.

These tasks involved some tense and dramatic moments, including heavy-duty diplomatic pressure at senior levels. But the primary tools of our trade were incentives, rather than punishments, and we did our best to avoid public name-calling.

The U.S.'s sincere and significant offers of assistance were in the end gratefully accepted, aiding materially to China's ability to contain the situation and helping to prevent global transmission.

After the SARS outbreak in 2003, the U.S. and China established a joint Emerging Infectious Disease program, which allowed public health experts and authorities from both countries to share experiences on infectious disease control and train health care professionals. That program proved its value when the deadly H1N1 influenza virus struck just a few years later in 2009.

Sadly, the Trump administration suspended this program as U.S.-China tensions rose in recent years, with no efforts to revive it. This has complicated expert-level information flow and undermined containment and treatment efforts for COVID-19 in the U.S.

Some of America's politicians seem to be reflecting on the fact that all nations exist on the same planet and are home to the same species. At the Democratic presidential debate on March 15, Bernie Sanders pointed out that "We have got to work with countries around the world. If there was ever a moment... to support each other, this is that moment."

Joe Biden added the U.S. should be "bringing the whole world together... We have to have a common plan. All nations are affected the same way."

The U.S.'s political leadership is waking up to the importance of international cooperation, both to protect the health of vulnerable loved ones during the COVID-19 pandemic and to deal with the profound economic impact of what one former finance minister told me was a "necessary self-imposed macroeconomic coma."

China policy experts in Washington tend to cite climate change as the prime example when they explain the importance of the U.S. and China both cooperating and competing at the same time.

But international cooperation on climate change is actually quite difficult: the intergenerational character of global warming's causes and effects, and the immense economic cost of doing something about it, invites freeloading and responsibility-shifting, as each economy seeks to grow faster than the others now and deal with the consequences later.

Pandemic preparedness and response, however, are a clear winner for global cooperation. Modest upfront investments in international scientific and medical coordination can bring an astoundingly high return on investment.

This implies not just work by China and the U.S., of course, but by the entire international community.

The growing international realization that global cooperation is needed may solidify too slowly to help all that much in the present tense as nations fight their first-round battles to contain the COVID-19 pandemic. The disease has already gone global, and is stretching many nations' political and medical and economic capabilities just to orchestrate local responses.

But more battles lie ahead in fighting COVID-19. Most important, the sharing of information about scientific studies of epidemiological patterns, and regarding treatments and vaccines, is just starting, and it needs to be smooth and open and well-coordinated. 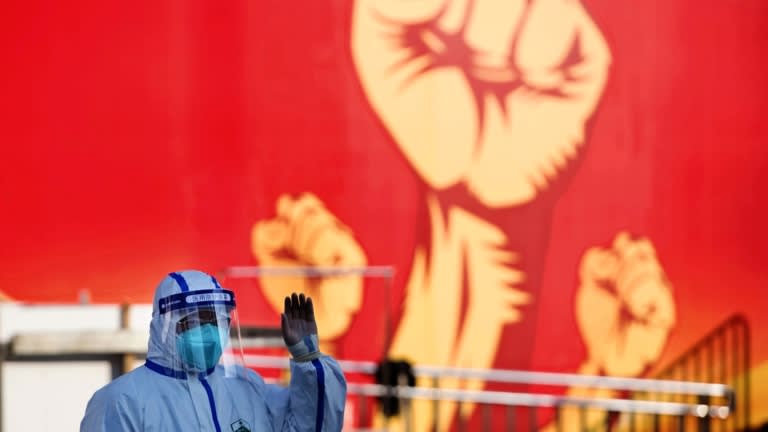 A medical worker stands near a propaganda poster as patients arrive at a temporary hospital in Wuhan on Feb. 12: more battles lie ahead in fighting COVID-19.   © Xinhua/AP

What might an effective global coordination program look like? One idea would be to link the technical abilities of the World Health Organization with the political strengths of the G-20, an organization that was born from the 1997-98 Asian financial crisis and grew stronger during the 2008 global financial crisis.

The G-20 brings together 65% of the global population and is home to 95% of confirmed COVID-19 cases as of March 17. It has a demonstrated ability to act fast and command the attention of the top levels of the most important world governments.

Even after COVID-19 subsides, an improved international coordination body of shared responsibility could be very impactful to tackle future crises. COVID-19 may indeed be a once in a century event, like the Spanish flu of 1918. But there are plenty of other epidemics arising every decade. SARS, MERS, Ebola, H1NI and various avian influenzas all happened just in recent years.

Greater preparedness would help address these challenges. For example, one could envision G-20 membership being predicated on member nations meeting certain targets for stockpiled supplies or for participation in shared research networks.

Such teamwork would certainly save lives and protect economies, regardless of where the next pandemics arise.

Ambassador Kurt Tong is a Partner at The Asia Group LLC. Previously he served five U.S. Presidents as a U.S. Foreign Service Officer in Japan, China, Korea, the Philippines and Hong Kong.