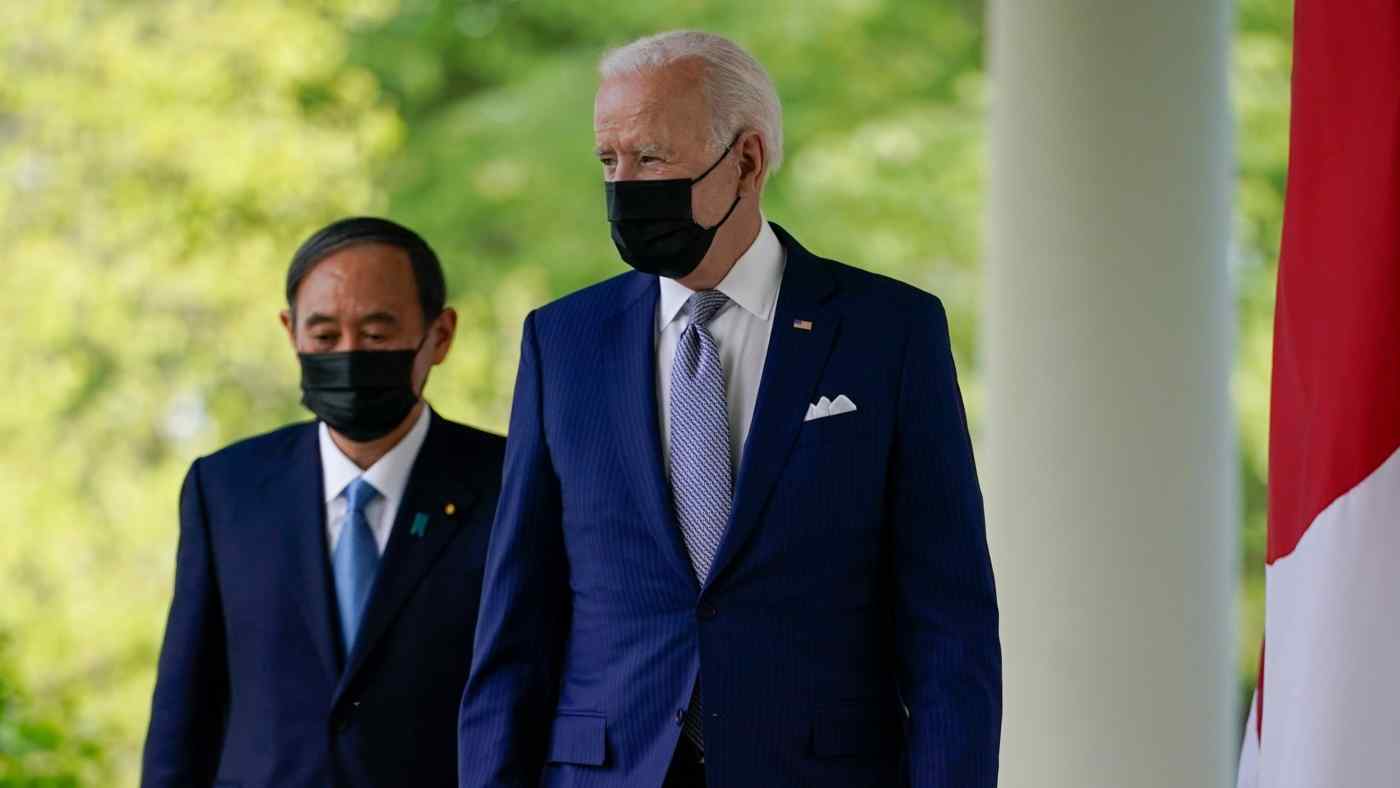 Joe Biden, accompanied by Yoshihide Suga, walks from the Oval Office on Apr. 16: the U.S. wanted Japan to be squarely on Washington's side.   © AP
CopyCopied

Kiyoteru Tsutsui is Henri H. and Tomoye Takahashi professor and senior fellow in Japanese studies at the Shorenstein Asia-Pacific Research Center and professor of sociology, all at Stanford University, where he is also director of the Japan Program.

In one of the few unscripted moments in the meticulously planned U.S.-Japan summit meeting last Friday, President Joe Biden referred to Prime Minister Yoshihide Suga as "vice president" before quickly correcting himself.

In a different era, this could have turned into a diplomatic incident, with right-leaning Japanese pundits calling it evidence of the U.S.'s patronizing approach to Japan. Fortunately for Biden, the current geopolitical environment is not conducive to such provocation, and no major media picked up on the slip.

The other time was in 1989, when Prime Minister Noboru Takeshita visited President George H.W. Bush. Back then, Japan was a major threat to U.S. economic hegemony. Today, China is that threat, and not just in the economic domain. China is the first bona fide competitor to the U.S. since the Soviet Union, and its threat extends to every nook and cranny of the globe.

To counter China's ascension, the U.S. needs its allies, and Japan is the most important partner for that purpose. This is the context in which Suga visited the White House despite all the COVID-related restrictions.

Not surprisingly, the statements were carefully crafted to send strong signals to China. Building on the two-plus-two dialogue in March, the joint statement touched on the importance of peace and stability in the Asia-Pacific, from the East and South China seas to even Hong Kong, Xinjiang and Taiwan.

Japan certainly wanted a reference to the Senkaku Islands, which Beijing claims and calls the Diaoyu, and the applicability there of Article V of the U.S.-Japan Treaty of Mutual Cooperation and Security. The Biden administration had made that commitment earlier, calming concerns among Japanese leaders that the new administration may be softer on China than the Trump administration.

Biden has, in fact, been quite tough on China and has given almost a perfect answer to what Japanese foreign policymakers wanted. In return, the U.S. wanted Japan to be squarely on Washington's side. The wording of the joint statement -- negotiated until the last minute -- saw Japan agree to include a reference to Taiwan for the first time in 52 years, but with Japan's preferred wording, encouraging "the peaceful resolution of the cross-Strait issues." 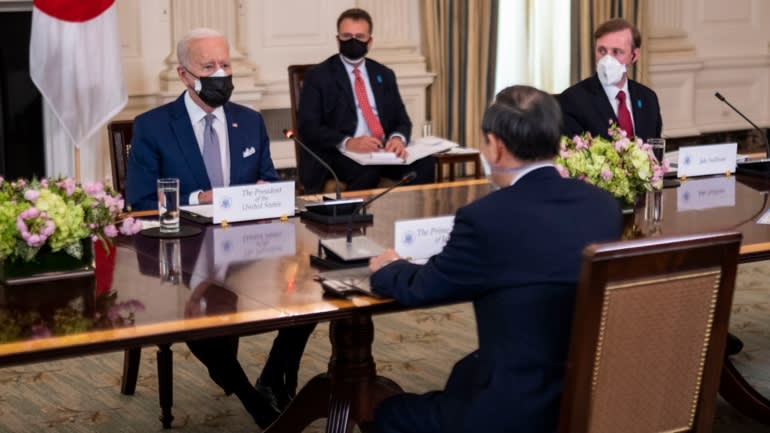 Joe Biden, left, and Yoshihide Suga hold a bilateral meeting in the State Dining Room on Apr. 16: Biden has given a perfect answer to what Japanese foreign policymakers wanted.   © Getty Images

Predictably, China reacted quickly and strongly, accusing the two countries of interfering in its domestic affairs and warning Japan about siding with the U.S. We have yet to see what retaliatory actions China might take, but the reference to Taiwan signals the beginning of a new trilateral relationship between China, Japan and the U.S.

The summit covered other important issues, all with China in the background. One key issue is economic security. In particular, supply chain decoupling will become a battle cry for the U.S. and its allies as they seek to reduce dependence on materials from China. Semiconductors are especially critical, as they power all the major growth areas in the new economy. Taiwan's dominance in the semiconductor industry is the main reason why Taiwan is so important to both sides.

To remain in the driver's seat in the new economy, the joint statement announced a new U.S.-Japan Competitiveness and Resilience (CoRe) Partnership. The most concrete proposal was an initial commitment of $4.5 billion from the two governments toward fifth generation (5G) and 6G networks, reflecting concerns about China's dominance in the key digital infrastructure of the future.

Human rights is another thorny issue, with the joint statement specifying concerns over Xinjiang and Hong Kong. With some companies joining the boycott campaign on cotton from Xinjiang, and China countering by criticizing racial division in the U.S., the clash between China and the U.S. will intensify in this area as well. Japan has stepped out of its comfort zone and criticized China on human rights, following the American approach more explicitly than before. In this regard, it is notable that Suga also referred to rising violence against Asians in the U.S.

One area in which China might be more of a partner than a competitor is climate change, with all three countries committing to zero emissions by mid-21st century. Almost concurrently with the Biden-Suga meeting, American and Chinese climate envoys -- John Kerry and Xie Zhenhua -- met in China and issued a joint statement affirming their commitment to work together on global climate challenges.

All these initiatives and commitments are potentially meaningful and consequential developments that can reshape the Indo-Pacific, although more concrete ideas are needed before we can evaluate their impact. The biggest take-away ought to be the confirmation that the U.S.-Japan alliance is gearing up for a new era of competition with China.

Japan more than reaffirmed its commitment to the alliance with the U.S., risking its economic relations with China. The U.S. will be sure to ask for more concrete actions from Japan on the basis of the joint statement, and Japan can no longer evade questions about what it would do in a confrontation with China. Japan has to navigate a tough terrain of standing with the U.S. in the competition with China while preventing the escalation of tensions between Beijing and Washington, and at the same time protecting its own national interests.

A new phase of the trilateral relationship has just begun, and like it or not, other Asian nations might face the same decision that Japan faced, and sooner rather than later.