US must not underestimate the risks of the Trump cult A man shouts as supporters of Donald Trump gather in front of the Capitol Building on Jan.6.   © Reuters
CopyCopied

Shoko Egawa is a journalist and professor at Kanagawa University.

The world was stunned on Jan. 6 when a mob of supporters of President Donald Trump stormed the United States Capitol. The deadly assault on Congress was a profoundly shocking scene.

The siege broke the spell Trump seemed to have cast over some of his supporters, with a growing number of Republicans distancing themselves from the president. The worry, however, is that diehard Trump loyalists will become even more fervent followers of what could be considered as the "cult of Trump."

Trump and his devoted followers have long been known for their divisive and dualistic thinking, a strong affinity with conspiracy theories, radical views of the world that are divorced from reality, and support for authoritarianism. Since Trump's electoral defeat, however, they have started exhibiting clearer characteristics of cult followers, such as victim mentality, a tendency to blame others, and the belief that the ends justify the means.

Cult members place blind and absolute faith in their leader. They believe in the righteousness of their group, and that they are on the side of truth. When faced with a fact that casts doubt on their beliefs, they do not confront it and consider seriously the possibility that they are wrong. Instead, they simply deny it or embrace a conspiracy theory suggesting the involvement of some kind of injustice or a malicious actor.

A cult is a hotbed of conspiracy theories. Cultists always blame others for bad things that happen to them. They make up stories that various enemies and obscure organizations are secretly plotting against them. So when the leader of a cult runs unsuccessfully for an election and refuses to accept defeat, it is hardly surprising that his followers refuse to accept the outcome because they believe it represents a "defeat of justice."

Trump did not directly call on his followers to storm the Capitol, and the rioters probably belonged to the extremist wing of his support base. But Trump "prophesied" what would happen on that day. "Big protest in D.C. on January 6th," Trump tweeted on Dec. 19. "Be there, will be wild!" At a rally just before the violence, he repeated his unfounded claim that the election had been "stolen" and urged his followers to "show strength."

The riot was actually an attempt to disrupt the congressional certification of Joe Biden's victory, carried out by people willing to use any means to accomplish their leader's wish. It was an act that had all the hallmarks of typical cult behavior.

Trump's claims of election fraud are not based on any specific evidence. Unsurprisingly, U.S. courts have unanimously rejected them. But people who are caught up in cult thinking put much greater importance on their own truths, and the words of their leader, than on any specific facts. They refuse to listen to others who point out their factual errors.

Japan can offer some valuable lessons for such people if they are willing to pay attention.

In February 1990, a man named Chizuo Matsumoto, also known as Shoko Asahara, the founder of a religious cult called Aum Shinrikyo, ran for election to the lower house of Japan's parliament. His high-profile campaign attracted much media attention after he ordered his followers to move their certificates of residence to his electoral district so they could vote for him, and used gimmicks such as having his young female followers dance at his rallies while wearing elephant hats. He also resorted to a range of dirty tricks, such as taking down the election posters of his rivals. 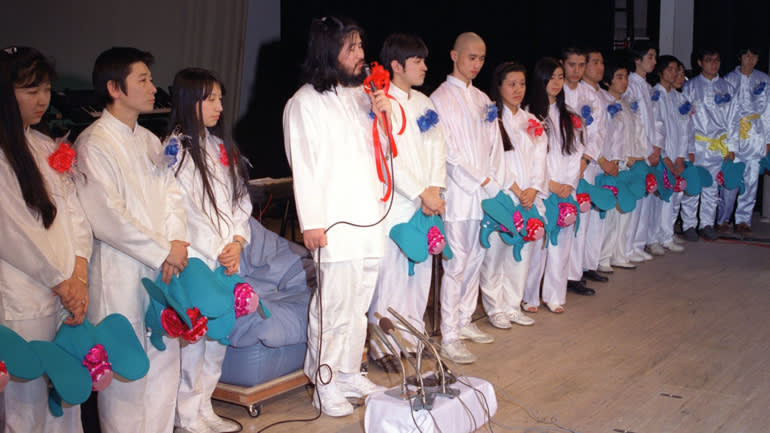 Shoko Asahara, fourth from left, leader of the secretive cult Aum Shinrikyo, is seen in Tokyo in January 1990 as they announce to run a general election.   © Kyodo

Confident he would win, Asahara suffered a humiliating defeat. He then claimed there was vote-rigging, saying some votes had been "replaced." He went so far as to allege a conspiracy involving "state power" and "Freemasons." His followers accepted his statements without question.

The way Trump and his supporters are ranting about election fraud and conspiracies, without presenting any evidence or facts to support their claims, have disturbing similarities to the way Asahara and his followers promoted fantasies about his failure to win at the ballot box.

Conspiracy theories can have strong traction. They offer intriguing stories about "truth that is not reported by media." They can easily catch the imagination of people who find that the stories support their own views and feelings. If you become fully committed to a conspiracy theory, you no longer have to fact-check or evaluate information. You are spared the mental burden of soul-searching and agonizing over weighty questions.

People who strongly believe in a conspiracy theory refuse to accept any fact that does not fit in with their story and may even get angry with those who try to undermine it. At the same time, it is dangerous to do nothing. Unfounded conspiracy theories, if they are allowed to go unchecked, can take root in people's minds like a virus infects the body.

Japan grossly underestimated the threat of Aum Shinrikyo, which was actually a doomsday religious cult with many dangerous ideas. Japanese media routinely described the cult as simply a weird group, often offering amusing stories as if it were a new subcultural icon, or just an intriguing religious movement.

As a result, it was allowed to grow into a powerful organization capable of committing a slew of murderous crimes that culminated in the 1995 sarin nerve gas attack on the Tokyo subway system, the world's first indiscriminate terrorist attack using a toxic chemical.

Five Aum followers carried out the attack during the morning rush hour, planting bags containing sarin, a colorless and odorless nerve agent, wrapped in newspapers on the floors of subway cars packed with commuters and students. After the bags were punctured with sharp-pointed umbrellas, sarin gas leaked through the holes, eventually killing 13 passengers and station staff, and injuring over 6,000 people. 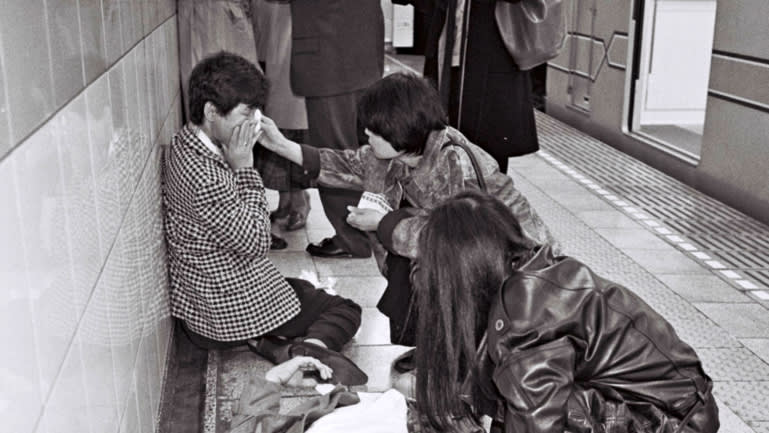 Passengers take care of victims of sarin gas attack at the Kamiyacho subway station in Tokyo on Mar. 20, 1995. (Photo by Yukinobu Kurosaka) 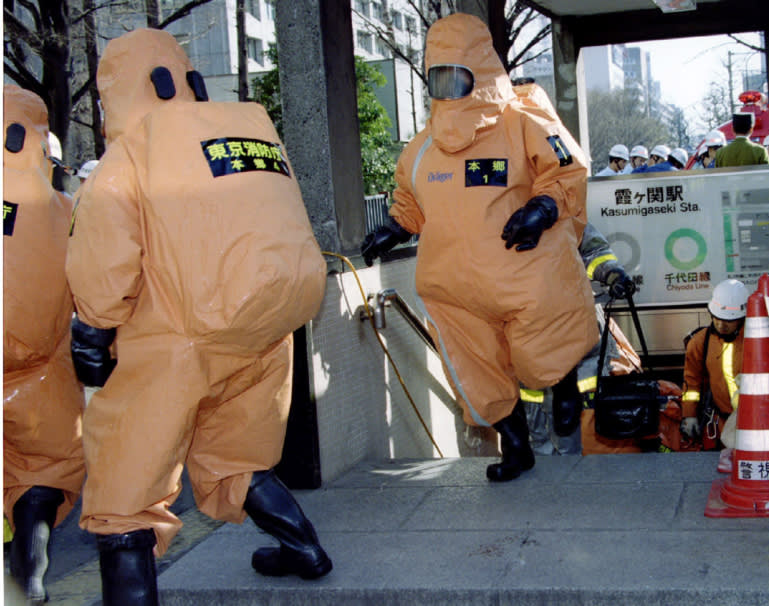 Special chemical control unit members emerge from an entrance to the Kasumigaseki subway station which was poisoned by sari gas in Tokyo on Mar. 20, 1995.   © Reuters

Aum also manufactured the even more toxic VX gas, as well as Clostridium botulinum and anthrax. The group actually used some of these tools of biological warfare in other crimes.

Japan's experiences with Aum Shinrikyo offer important lessons for American society. Cult thinking and false information pose a serious safety threat when they are allowed to quietly gain ground. How the aftermath of the U.S. presidential election has unfolded is graphic evidence of this danger, which can manifest itself in many forms.

Included among the people who stormed the halls of Congress were followers of the discredited far-right conspiracy QAnon, neo-Nazi militias groups and white supremacists. It has been reported that federal agents in Washington have made at least 70 arrests, with investigations set to uncover more facts about the rioters.

In an era when anybody can send out messages and information to a mass audience, people casually spreading unproven conspiracy theories should be made to understand that what they are doing is similar to the act of spreading a virus.

I believe we should be cautious about using the word "cult," which has such negative connotations, in describing or discussing certain people, groups and activities. But now that the democratic system of the world's most powerful country under threat, we must not hesitate to point out the danger of cult thinking, and never underestimate the risks posed by its spread to our society.