Joe Biden listens as Narendra Modi speaks during a Quad nations meeting at the White House in September 2021: it is a safe bet that Biden and Modi are envisioning very different world orders.   © Reuters
CopyCopied

Something extraordinary is happening in the global political economy.

While the United States and its NATO allies have weaponized finance, culture, trade and arms movements in the interests of defending Ukraine and forestalling Russia, most developing and emerging nations, while paying close attention, are studiously looking the other way.

China and India, the two most populous countries in the world, and a clutch of other important countries, such as South Africa and Brazil, have declined to pick a side in the conflict. China and India have abstained on all United Nations motions put forward by the U.S. and its allies to condemn Russia. All told, anywhere from a third to a half of humanity are not partisans in the war.

The conflict has created such anomalies as Pakistan's embattled Prime Minister Imran Khan, facing a no-confidence motion at home, praising India's neutral stance in the Russia-Ukraine war. Such praise of India from a leader of Pakistan, or vice versa, is almost unheard of.

India, meanwhile, has been negotiating with Russia to purchase heavily discounted oil on a rupee-ruble basis, bypassing the dollar, in which oil is theoretically always priced, harking back to the days of the Soviet Union and its independent trading block called Comecon, the Council for Mutual Economic Assistance, when much of the trade was bilateral and denominated in the two countries' respective currencies. 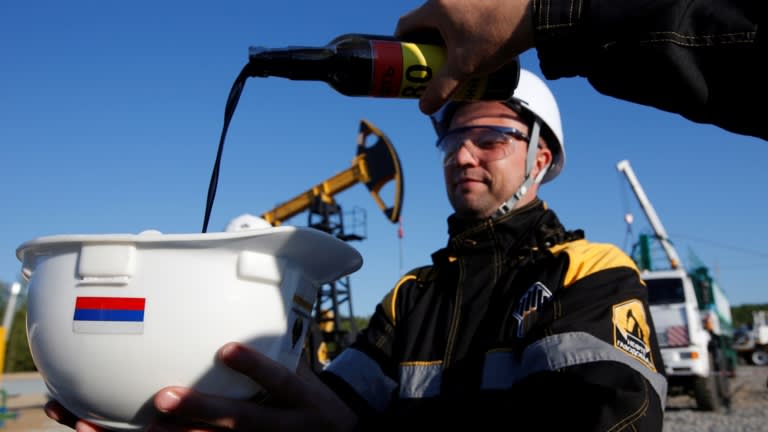 Workers demonstrate a sample of crude oil at the Rosneft-owned Priobskoye oil field outside the Western Siberian city of Nefteyugansk: India has been negotiating with Russia to purchase heavily discounted oil on a rupee-ruble basis.   © Reuters

It is extraordinary that the weaponization of trade and finance by the U.S. and its allies has forced India and Russia to contemplate resurrecting this Cold War trading mechanism.

Cocking a snook at the U.S., Russia's ambassador to India, Denis Alipov, said the two countries had mechanisms "of cooperation and transactions independent of Western... financial mechanisms."

"Other nations are banning exports to Russia, so it is a good time for Indian exporters to enter into the Russian market," A Sakthivel, president of the Federation of Indian Export Organizations, told the Financial Times.

None of this has gone down well in Washington. On Mar. 22, U.S. President Joe Biden said that among the Quad group of countries, the U.S., Japan, Australia and India, only the latter was "somewhat shaky" when it came to sanctioning Russia. None of which has deterred other developing countries from continuing to engage with Russia.

Indian Prime Minister Narendra Modi has always been ambivalent about a wholehearted embrace of the West, especially the U.S., and the pressure to shun India's traditional partners, especially Russia but also including Iran. Indeed, if the sanctions regime permits, India and Iran are contemplating a bilateral oil purchase agreement on a rupee-rial basis, another thing that would not sit well with Washington.

At the same time, South African President Cyril Ramaphosa has been spirited in his condemnation of NATO's eastward expansion as being the root of the current conflict, while Ugandan President Yoweri Museveni has endorsed China-style quiet diplomacy over the Western approach, which he says is riddled with "double standards."

The war in Ukraine is a shot in the arm for the inward-looking, self-reliant policies of many developing countries, including India.

I have been a critic of Modi's atmanirbhar, or self-reliance doctrine, for distorting efficient global patterns of trade and causing self-harm to the Indian economy. But in a time of war, when the world's remaining superpower, the U.S., is weaponizing trade and finance and carefully scrutinizing arms sales, there is something to be said for strategic self-reliance in key sectors, especially as the doctrine relates to arms and other essential products that an economy such as India's needs to survive in times of global economic disruption.

With the current global economy in such a state of disarray, just about every major political leader is talking about creating a new world order. "We're going to -- there's going to be a new world order out there, and we've got to lead it. And we've got to unite the rest of the free world in doing it," Biden himself said on Mar. 21 ahead of a meeting with key a business lobby group.

Biden is not the only world leader wishing to create and lead a new world order, with Modi noting recently that "in the circumstances created by COVID-19, a new world order is emerging. In this new order, India has to develop itself at a faster pace."

It is a safe bet that Biden and Modi are envisioning very different world orders. Biden wants to create a new liberal international economic and geopolitical order led by the U.S. and other Western liberal democracies, but many developing countries, such as China and India, view this as an outdated relic of World War II and its immediate aftermath.

While China has a permanent seat on the U.N. Security Council and so has some stake in the current world order, neither India nor any major developing economy such as South Africa or Brazil has made any progress toward getting a seat at the big table.

As the distinctly disjointed global response to the Ukraine war demonstrates, most developing countries want no part of the old world order that Biden is trying to resuscitate. Rather, they would prefer to forge their own path in a global political economy that is increasingly fragmented and characterized by regional hegemons, each of which is attempting to assert its own sphere of influence and does not want to be boxed into the old Cold War dichotomies of West and East.

Biden may indeed get a new world order, but not exactly the one he was banking on.