Trade wars, as Donald Trump likes to say, are "good and easy to win." Yet things can quickly get challenging for those trying to manage the U.S. president's assault on global markets.

Just ask officials in Hanoi, who now find themselves on the receiving end of Trump's wrath.

Over the past six months, Vietnam has quietly cleaned up as Trump's tariffs slam China. As 25% taxes on Asia's biggest economy wreaked havoc with supply chains, Vietnamese factories gladly grabbed business from multinational companies looking for an exit valve. They ramped up production of smartphones, shoes, textiles, furniture, you name it. In the first five months of 2019, Vietnam's exports to America jumped 36% year-on-year. Inward investment jumped 69% in that period to nearly $17 billion year on year versus the first five months of 2018.

The White House first hinted at its displeasure in May by adding Vietnam to its currency-manipulation watchlist. Earlier this month, it pounced with penalties more than 18 times larger than those exacted from Beijing. Its 456% duty on Vietnamese steel is not a typographical error, but an expression of Trump's determination to bring Hanoi to heel.

They also are a harbinger of greater chaos to come. First Trump targeted China. Now it is Vietnam. Next may be Japan, the European Union and then again China, the nation Trump sees as "stealing" more U.S. jobs than any other.

But, for Hanoi, Trump's assault on Vietnam's export engine raises a bigger question: can the nation of 97 million people stand its ground?

It will not be easy. Now that team Trump understands the game, more action against "Made in Vietnam" labels is virtually assured. Trump's Treasury Department will increasingly scrutinize changes in the dong-dollar exchange rate.

Vietnam's economy grew 6.71% in the April-June quarter, one of the highest rates in Southeast Asia, thanks largely to this alternative-to-China dynamic. The softish exchange rate is helping. Unlike surging currencies from Indonesia to Thailand to the Philippines, the dong is largely unchanged versus a dollar the U.S. is working to weaken.

That has not escaped Trump, who recently complained that Vietnam is "almost the single-worst abuser of everybody" he perceives to be costing America jobs. Yet Vietnam is merely benefiting from "human nature," says economist Rob Carnell of ING Bank. "You increase the cost," he says, "and people are going to try to find a way to avoid it."

Nintendo, for example, is moving production of its Switch gaming console to Vietnam from China. The same with GoPro, Hasbro, Ikea, Nike and other household names. And as the Nikkei Asian Review reported Wednesday, Apple is starting trial production of its popular AirPods wireless earphones in Vietnam -- not China. Even before the trade war, Vietnam was inking deals with the likes of Samsung Electronics, Intel and Nestle thanks to its trade openness, low labor costs and proximity to Asia's most dynamic economies. 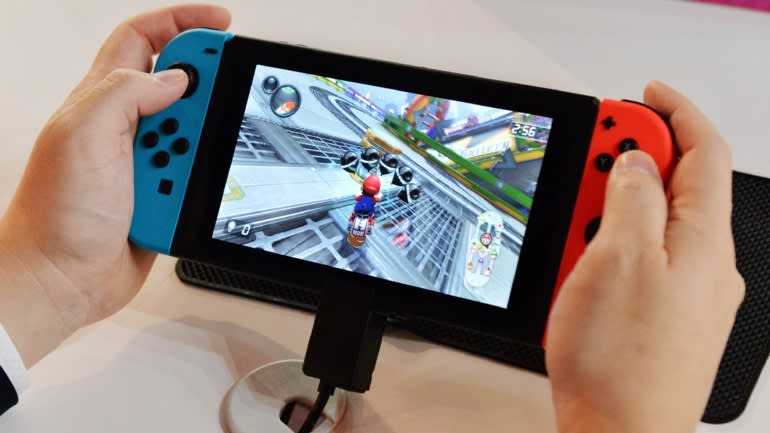 Nintendo is moving production of its Switch gaming console to Vietnam from China. (Photo by Wataru Ito)

Vietnam is struggling to hide these wins. Last year, its trade surplus with the U.S. reached a record $40 billion and up from about $20 billion in 2014. In the first five months of 2019, the gap is already 43% higher than a year ago.

America's protectionist-in-chief wants Prime Minister Nguyen Xuan Phuc to curb the surplus. Understandably, Phuc's team is reeling, unsure what Washington might do next.

So far, Phuc has taken a page from Japanese Prime Minister Shinzo Abe and offered to gorge on U.S. goods. His government expressed a willingness to up purchases of Boeing jets as well as energy and other products.

If Trump now slapped the same 25% levies on Vietnam as he did on China, says Capital Economics, it would suffer a 25% plunge in export revenue. It would be a devastating loss for export-dependent Hanoi. The U.S. is by far Vietnam's main export destination.

Vietnam's efforts in recent years to diversify export destinations may soften the blow. Along with staying in the revised Trans-Pacific Partnership, Hanoi has signed free-trade deals with the European Union and other markets.

Even so, Trump's broadside is a wake-up call for Phuc to modernize the economy and reduce reliance on exports.

Phuc must strengthen the national balance sheet. In a recent report, the Institute for International Finance pointed out that Vietnam's refinancing needs, and risks, exceed even those of Turkey. In a July 8 report, Fitch Ratings warned Vietnam's banking sector is becoming "more vulnerable to shocks as leverage rises." Bank credit, Fitch estimates, reached 134% of gross domestic product at the end of 2018. That is significantly higher than the 60% median for similarly rated 'BB' nations.

Corruption exacerbates the volatile sentiment, by raising questions periodically about the quality of the business environment. For all its progress, Hanoi still ranks 117th on Transparency International's corruption perceptions index, behind Pakistan and Niger.

Government short-termism is to blame. At the start of 2019, Phuc pledged to accelerate efforts to modernize tax policies, boost budget revenues, tighten corporate governance and streamline customs procedures -- just as he did in January 2018. Clear successes are few.

One top priority is speeding efforts to privatize hundreds of state-owned enterprises. A vibrant private sector is vital to competition.

It is critical, too, to beat the "middle-income trap." Like Indonesia, Malaysia and the Philippines, Vietnam risks seeing annual per capita incomes plateauing below $10,000. Today, Vietnam is around $2,600 in nominal terms. Considering 70% of Vietnamese are under 35, Vietnam must create millions of good-paying jobs, not just temporary factory posts.

The communist government, though, often lets paranoia get in the way.

It requires tech companies to ban and erase content Hanoi seems "toxic." Google and Facebook and their rivals are required to set up local representative offices and hand over user content when asked. That is surely having a chilling effect on Ho Chi Minh City's tech scene.

As the trade war intensifies, Hanoi has little choice but to accelerate diversifying growth engines and moving its economy upmarket. This is painful. But in truth, Trump is forcing Vietnam to do what it should be doing anyway.

William Pesek is an award-winning Tokyo-based journalist and author of "Japanization: What the World Can Learn from Japan's Lost Decades"