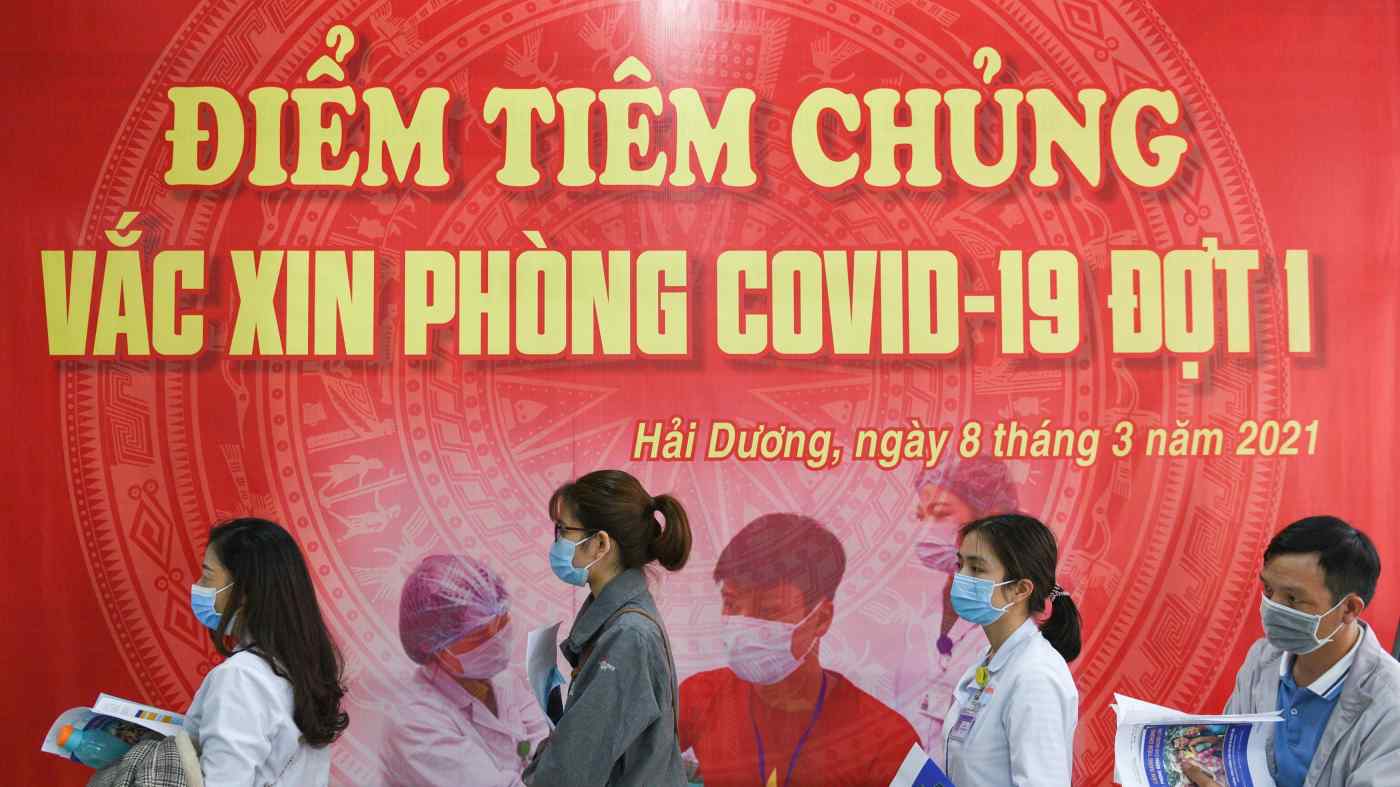 Vietnamese health workers lining up for their vaccine.   © Reuters
CopyCopied

Dien Luong is a visiting fellow at the ISEAS-Yusof Ishak Institute, Singapore. Opinions expressed here are his own.

On Mar. 7, one day before Vietnam launched its COVID-19 vaccination drive, the Facebook page of the Chinese embassy in Hanoi posted a link to a video produced by the Xinhua News Agency titled: "Many world leaders choose Chinese COVID-19 vaccine."

The post elicited little engagement. But in what seemed to be a sneer at the safety record of China's coronavirus vaccines, a comment apparently from a Vietnamese Facebook account attracted eyeballs with the pointed question: "Are they still alive?"

It would be a stretch to accredit that one comment as an accurate measure of public sentiment in Vietnam toward the Chinese-made vaccine. But in Southeast Asia, Vietnam has remained a prominent outlier to China's fanfare vaccine diplomacy campaign.

Despite some hiccups across Europe, Vietnam is forging ahead with its plan to inoculate 117,000 doses of the U.K.'s AstraZeneca COVID-19 vaccine by the end of March. Facing a delay in shipment of other doses from the COVAX vaccine-sharing initiative, Vietnam on Mar. 23 approved Russia's Sputnik V.

The country is in talks to buy more vaccines from the U.S. Its homegrown shots are expected to be available by the fourth quarter of this year. No Chinese vaccine candidate has been publicly named.

It could be tempting to interpret Hanoi's current lack of interest as either a wholesale rejection of Beijing's vaccine diplomacy or a brewing geopolitical game-changer. All of this brings about a sense of deja vu: In 2019, when Vietnam cast China's technology giant Huawei Technologies out of its plans to build fifth-generation cellphone networks, many considered the move geopolitically driven.

But the real message behind the Huawei ban and China's stalled vaccine diplomacy in Vietnam is much more subtle. What the black-and-white interpretations are unable to convey is the very fine line that Hanoi has constantly had to walk between placating an increasingly anti-China audience at home, and maintaining long-term bilateral relations with Beijing.

Already dogged by a checkered history when it comes to vaccines, China has failed to assuage growing public fears of the lack of public data surrounding its COVID-19 shots, as well as their efficacy and safety. Globally, Beijing has faced myriad allegations for peddling a sanitized narrative of its pandemic handling, cracking down on vaccine safety advocates, and spewing online disinformation about non-Chinese vaccines. All these factors must have not been lost on Vietnamese leaders in a country where anti-China sentiments run deep.

According to an annual survey by the Singapore-based ISEAS-Yusof Ishak Institute, Vietnamese -- along with Filipinos -- currently register the most palpable levels of distrust toward China in Southeast Asia. Their state backing is likely to sow further doubts when it comes to Chinese vaccines.

At a time when Vietnamese leaders have continued earning widespread kudos by successfully battling the pandemic, it would be a risky bet to gamble away such otherwise hard-earned public trust on Chinese shots.

Still, the move by Vietnam at this point is more about boosting domestic legitimacy than adopting an unwavering stance on Chinese vaccines, much less other areas. It is also apparently reflective of how Vietnamese authorities have become increasingly adept at playing the domestic anti-China sentiment card to score points with the public. Vietnam is rolling out its inoculation drive with the AstraZeneca shots, turning away from China's homegrown vaccine.   © Reuters

That pattern is not without precedent. In a country that has hardly brooked political demonstrations, Vietnam occasionally greenlighted anti-China protests. In doing so, Hanoi was able to telegraph a stern message regarding Beijing's muscle-flexing exercises in the South China Sea, while at the same time giving Vietnamese nationalists the opportunity to blow off some steam.

Still, against this backdrop, China has apparently remained too haughty to rectify its soft power faux pas. Anti-China sentiments also thwarted Beijing's repeated attempts to shape its narrative in the media environment in Vietnam, according to a 2020 study by the Washington-based Center for Naval Analysis.

In the online sphere, a closer look at social media posts by both the U.S. and China diplomatic missions in Vietnam shows that Beijing has adopted a scathing anti-America attitude in a country where poll after poll has shown Vietnamese favor Washington over Beijing.

A case in point: In July 2020, the Chinese embassy in Hanoi posted a note from the Global Times editor, warning Vietnam not to side with the U.S. to contain China. The note was subsequently taken down in the wake of a public backlash. The takeaway here is that China's condescending tone and starchy language are a hard sell to Vietnam's Internet-savvy youth, even though its criticism of the American agenda is not always utterly groundless.

If China does seek to put the geopolitical cart before the "global public good" horse, its vaccine diplomacy campaign is all poised to fall flat in Vietnam, one of the most vociferous critics of its maritime aggressiveness. It is also likely to redound to the benefit of the U.S., which has raised hackles around the world for its own vaccine-hoarding.

China, it seems, has missed a golden opportunity to demonize the U.S. A bitter pill indeed for a vaccine diplomacy campaign that Beijing has billed as an emblem of its scientific expertise and generosity.