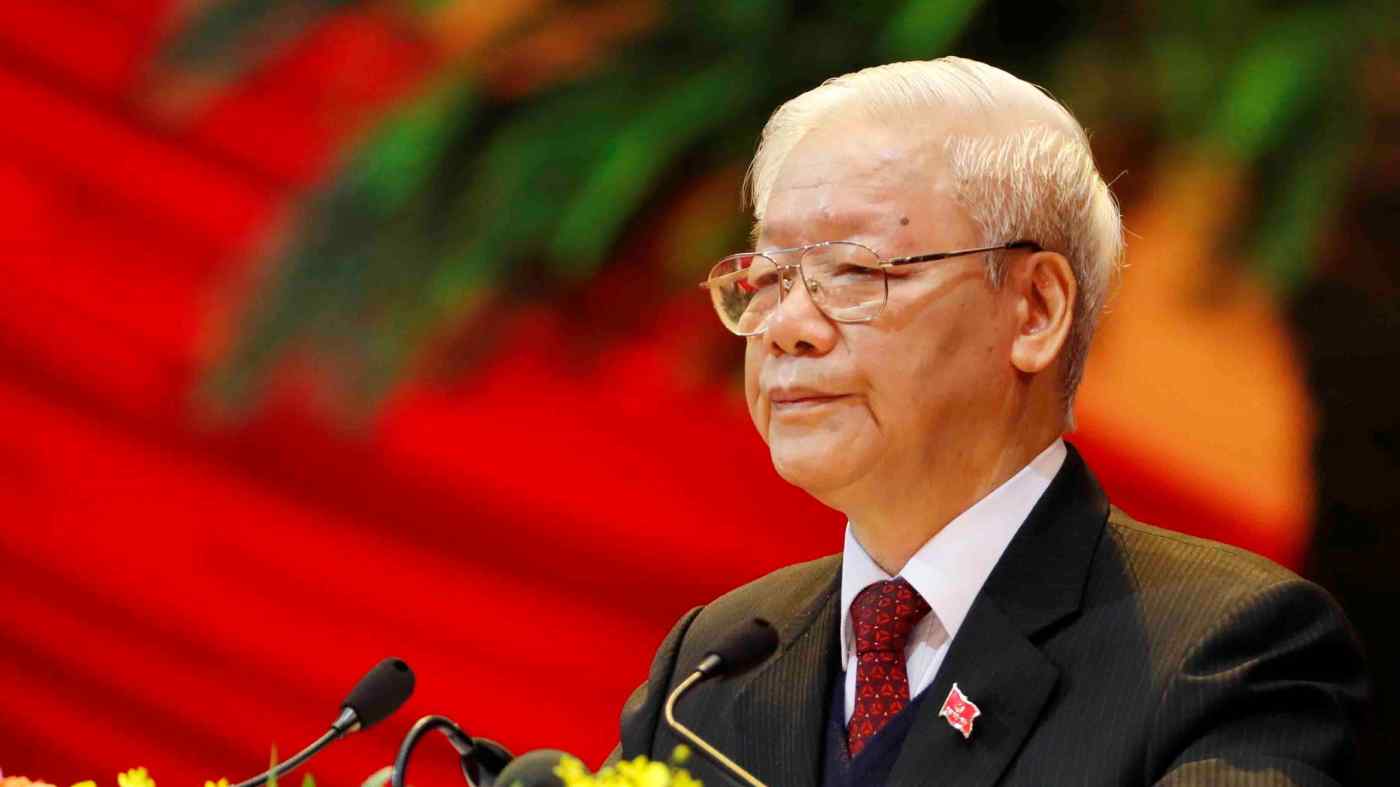 Nguyen Phu Trong speaks at the opening ceremony of the 13th National Congress in Hanoi on Jan. 26: the country's development prospects are likely to be more of the same with Trong as party chief.   © VNA/Reuters
CopyCopied

Nguyen Phuong Linh is a Singapore-based political analyst and a former journalist in Hanoi. Opinions expressed here are solely her own, not her employer's.

The Internationale, communism's anthem to revolution and the class struggle, opens with the words: "Arise, slaves in the world. Arise, those who are miserable and poor."

Sung by nearly 1,600 Vietnamese Communist Party leaders during the opening ceremony of the once-every-five-years party congress that concluded on Feb. 1, none of them looked especially enthusiastic as they continued with the words "my heart is filled with boiling blood and enthusiasm."

Nguyen Phu Trong, 76, who was reelected as the Party Chief of the Communist Party of Vietnam for a rare third term, looked pale, his voice shaking at several moments during a keynote address that lasted more than an hour.

While this 13th National Congress went more smoothly than the last, without any last-minute surprises, it masks the existential challenges looming on the horizon for the CPV.

Behind closed doors, those 1,600 delegates elected the powerful central committee, which has 200 members. This committee in turn elects the Politburo, which is Vietnam's real decision-making body. The Politburo currently has 18 members -- although these numbers have varied over the years -- an even number makes it more difficult to understand how the voting mechanism works.

While there is technically a vote, in reality, most Politburo members were hand-picked by current and former senior leaders who hold such strong influence over Vietnamese politics after much infighting and hidden negotiations, with the names presented to the delegates to rubber-stamp. There are another 97 million Vietnamese people -- minus 1,600 -- who have very little say in selecting their own country's leadership.

Yet, the CPV's system is considered more democratic than that of the Chinese Communist Party. Unlike in China, where the top two leaders are often planned 10 years -- or more -- in advance, in Vietnam power is at least contested. This form of democratic centralism -- democratic for those members of the Central Committee -- is slightly more inclusive. But can the CPV remain in power for decades without rejuvenating itself the way China has?

The average age of the 18 new members of Vietnam's Politburo is now 63, the highest in the past 20 years. One notable absence is Vu Duc Dam, a 57-year-old Western-educated deputy prime minister, whose success in managing Vietnam's response to COVID-19 has made him a national hero in the eyes of many. One of the few top leaders who are multilingual, Dam was also a favorite among foreign diplomats and investors. But being relatively young and competent apparently still does not guarantee the ability to be selected for the Politburo.

The country's development prospects are likely to be more of the same with Trong as party chief, the most powerful position in Vietnam's political system. As long as average incomes and living standards continue to rise, most people are likely to remain optimistic about the future of the country, but at the same time maintain mixed feelings about their political system.

In every congress, the CPV always claims that its membership is at an all-time high, which may be true. But with only about 5% of Vietnamese party members, the claim is of little relevance to the public at large, and of even less interest to young people. Being a party member may be the only way to rise to a senior position within the bureaucracy, or at a state-owned enterprise. Fewer and fewer young people are putting their hands up to join the CPV or are showing any interest in the party congress.

"The party is supported by the people with all their hearts," Trong said at the congress last week. But many people are completely baffled by how to even show support for the party, let alone do it with all their hearts. The truth is that many young Vietnamese remain totally unaware of the CPV's existence and what the party's leaders do. People hang out next to the decorations for the 13th National Congress in Hanoi on Jan. 23: many young Vietnamese remain unaware of what the party's leaders do.   © Getty Images

The anti-corruption campaign led by Trong since 2016 has helped lift both his own public standing and that of the CPV. And while people had always believed that corruption was a problem, especially at the local level, the campaign revealed that even at least a Politburo member and several ministers were engaged in corruption as well. Not only did that damage the CPV's reputation and legitimacy, but it has added to the widely held perception that corruption is not just a local issue but is endemic to the entire political system.

In addition, while promoting economic growth has been a key measure of the CPV's success, that may create other challenges since modernization tends to make citizens less deferential. Chief among the CPV's concerns will be growing inequality, or the rise of businesses that become too big for the party to control. Still, the process of attitudinal change is slow and counterbalanced by patriotic sentiment and a cultural commitment to order and harmony. That means the regime is unlikely to be forced to democratize anytime soon.

The one factor that will really challenge the CPV's legitimacy is not corruption, the economy, public criticism, nor China's rising aggression. These are all issues that the CPV has shown us that they can handle relatively well.

The immediate task facing Trong over the next five years is how to communicate the fundamental ideological contradiction between capitalist-style economic development and total party control to Vietnam's 97 million people -- more than 50% of whom are under the age of 35 -- in such a way as to tame their hearts.

Otherwise, the CPV regime will become more like Schrodinger's cat, alive and dead at the same time. Regardless of what most Vietnamese people think, behind closed doors, the 1,600 communists were still chanting: "This is the final battle... we are united for tomorrow."