Vietnamese love the US, and China cannot change that

Attempts to turn the Afghanistan withdrawal to Beijing's advantage have failed 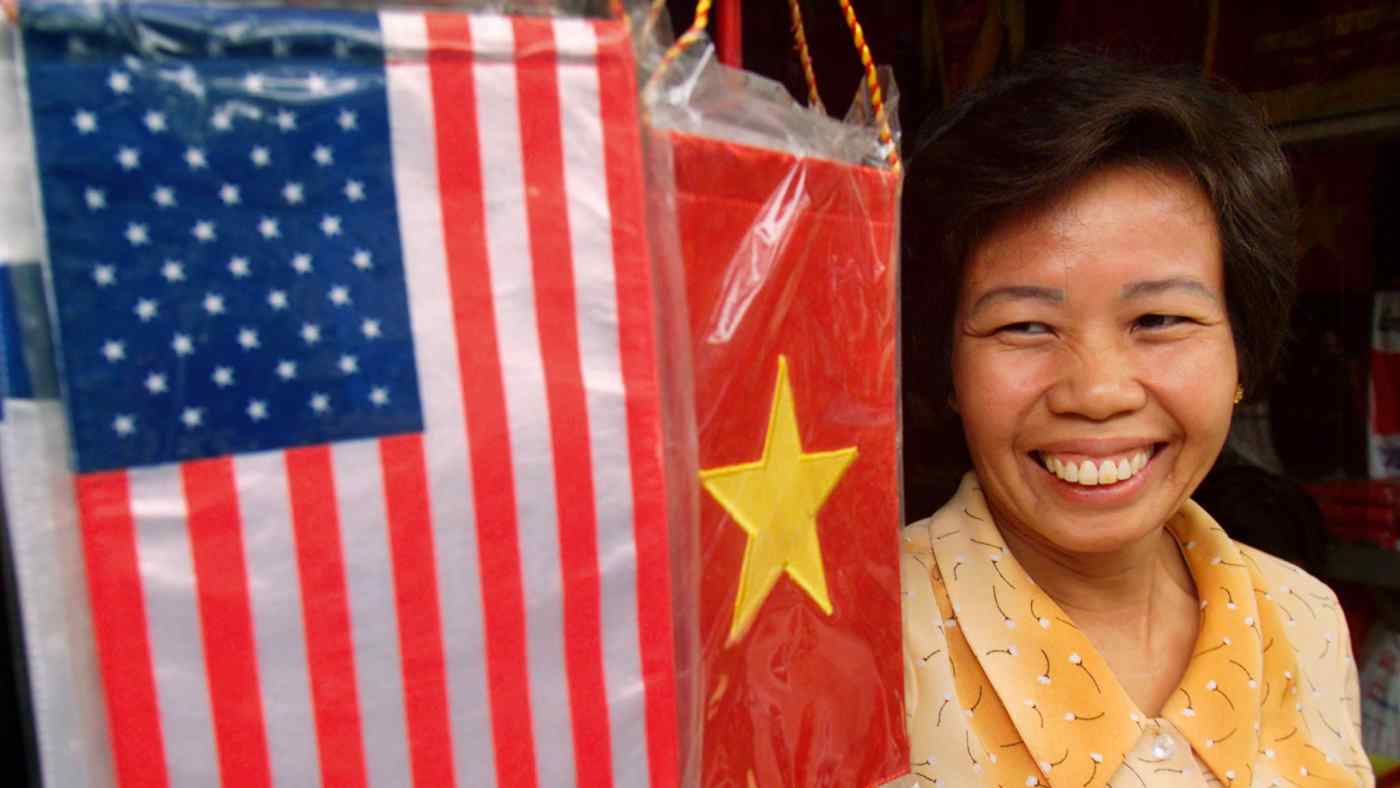 A Vietnamese saleswoman stands next to an American and Vietnam flag on sale in Hanoi: America's soft power diplomacy appears to have triumphed.   © Reuters
CopyCopied

Dien Luong is a visiting fellow at the ISEAS-Yusof Ishak Institute, Singapore.

Last Friday, two weeks after Harris departed Vietnam, China's Foreign Minister Wang Yi touched down in Hanoi to embark on a weeklong trip to the region, adding South Korea to his itinerary.

Such back-to-back diplomacy efforts stood in stark contrast to the lackluster diplomatic exchanges between Hanoi and Beijing over the past year.

Earlier this year, Wang visited all Southeast Asian countries but Vietnam. Last March, Vietnam was not invited to a high-profile regional meeting hosted by China in Fujian that brought together the foreign ministers of Indonesia, Malaysia, the Philippines and Singapore to discuss the political crisis in Myanmar.

In that context, Wang's visit to Hanoi on the heels of Kamala Harris and U.S. Defense Secretary Lloyd Austin speaks volumes to how wary China is of the Vietnamese charm offensive being waged by Washington, and how Beijing has been scrambling to act as a spoiler. It is conceivable that China's don't-edge-too-close-to-the-U.S. message could resonate with Vietnam's leaders, who have repeatedly reiterated that the country will not play one major power off against the other. At the end of the day, Vietnam has to try to get along with and stand up to China.

The problem for Beijing is that it will always face an uphill battle rallying the Vietnamese public to its side. The latest indicator of just how hard was the awkward position China found itself in when it tried to draw a parallel between America's chaotic withdrawal from Afghanistan and the Fall-of-Saigon in 1975.

On the night of Aug. 26, immediately after Harris had left Vietnam, the Chinese embassy in Hanoi posted a blistering note on its Facebook page in response to Harris' remarks castigating Beijing's "bullying and excessive claims" in the South China Sea. "Countries in the region will not jump into an anti-China alliance led by the U.S.," the note read.

Citing the Afghanistan debacle, the Chinese embassy pointedly asked whether the U.S. was "awakening" the specter of the fall of Saigon by sending American politicians to Vietnam to "sow discord" between China and its neighbors.

The Chinese embassy also drew attention to the fact that Vietnam was still nursing wounds inflicted by the war with America. Concluding with a warning that Washington should not overestimate its power and influence, the Facebook post -- written only in Vietnamese and Chinese -- was clearly targeted at the Vietnamese public.

It did not take long for ordinary Vietnamese to push back, a testament to how events in Afghanistan had failed to turn public opinion against Washington.

An analysis of public sentiment online by Singapore's ISEAS-Yusof Ishak Institute showed that attempts to link the American withdrawal from Afghanistan to the Fall-of-Saigon had barely surfaced in discussions in Vietnam's cyberspace, much less in its state-controlled media during Harris' visit.

Another content-based analysis conducted by the same institute showed that Harris' tour generated overall positive reactions in both Vietnamese news outlets and on social media.

Granted, views expressed online could prove fleeting, protean and even prone to manipulation. But such positive reactions are likely the manifestation of the pro-America sentiment that has long been gestating among Vietnam's younger generation.

With two-thirds of the country's nearly 100 million born after the Vietnam War, Vietnamese youth account for a quarter of the total population. It is those people who are the bedrock of public opinion, a fact corroborated by various polls indicating an unwavering favorability among Vietnamese toward the U.S.

Outside observers have long struggled to understand the lack of a grudge against the U.S. among young Vietnamese, despite a brutal war that nearly obliterated their country. But for the postwar generation, America's soft power diplomacy and the cultural appeal of what Uncle Sam embodies appear to have triumphed.

Meanwhile, the notion of a thousand-year conflict with China has become so deeply embedded in the Vietnamese psyche that Vietnam's rulers often emphasized it to inspire nationalistic movements against colonialism and other foreign invaders. Intriguingly, Vietnam also used the Chinese threat to boost its propaganda campaigns during the war against the Americans.

Indian journalist Nayan Chanda once recounted that while U.S. warplanes were still bombing Hanoi in the 1970s, foreign visitors to the city's national museum were given historical accounts of China's various occupations of the country.

Leading American political activist Noam Chomsky had a similar experience when he visited Hanoi during a short hiatus in the U.S. bombing of North Vietnam, noting that on the morning of his arrival he was taken to the war museum to listen to long lectures about centuries-old Vietnamese wars with China.

To many Vietnamese, that message remains relevant today. There is no discordance between Vietnamese youth and older generations when it comes to Vietnam's giant northern neighbor: The Chinese threat has never gone away.