What Asia can learn from the Philippines

The Philippines does not often find itself cast as an economic role model. But when it comes to gender empowerment it has Japan and South Korea, and even the U.S., looking on in awe.

In the World Economic Forum's latest equality index, the Philippines was the only Asian nation to crack the top 10 -- eighth place. You have to scroll down 59 rungs to find the next significant Southeast Asian economy -- Singapore on 67. The U.S. comes in at 51 and China on 103.

Nor is this a flash in the pan. Manila has excelled in the WEF's gender reports since they were launched in 2006. It does particularly well in metrics including education, wage equality and political participation. And in doing so, it offers pointers for a region with a poor track record of advancing its female labor force.

This can seem a bit of a paradox because, as rabidly patriarchal as Asia can be, the region has seen the most female leaders anywhere. Bangladesh, India, Indonesia, Myanmar, Nepal, Pakistan, South Korea, Sri Lanka and Thailand all have been headed by women. The list arguably includes China, where Soong Ching Ling served as honorary president in the early 1980s. It most definitely includes the Philippines, which has had two female presidents.

At first sight, the Philippines might seem unpromising ground for a gender revolution. An agrarian, largely Roman Catholic, country is not typically a base for feminist groundswells. A Filipina just won one of those retrograde Miss Universe contests: her victory may be a one-off but the show's widespread popularity in the country is not. Few political leaders anywhere as fond as President Rodrigo Duterte telling sex jokes and trafficking in misogyny.

So, what has Manila done right? For one thing, it maintained the matriarchal lineage system of indigenous Filipinos that existed before Spain grabbed power in the mid-16 century. Women were then empowered, often engaging in trade and inheriting family land. Memories of that system survived American rule and still influence attitudes today. 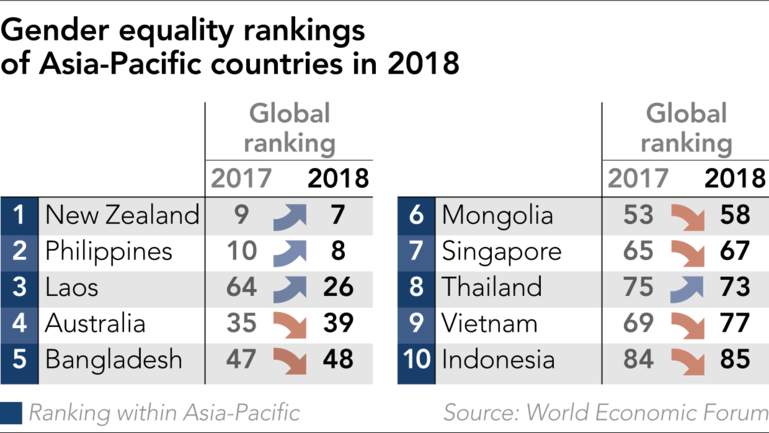 For another, a succession of governments worked hard to narrow the economic gender gaps, particularly since the mid-1980s. To be sure, poverty and unemployment are still an acute challenge in the nation of 105 million people. The gap between rich and poor remains wide, every by regional standards. But the economic gender divide is much smaller than elsewhere in Southeast Asia as those women who can get jobs enjoy a high level of pay equality with men.

It helps that the education system is often based more on ones pecking order within families than sex. As a result, literacy rates for women tend to be slightly higher than men, an oddity in Southeast Asia.

"Access to education is unhampered by gender," explains Candice Gotianuy, chancellor of the University of Cebu, the nation's biggest privately-held college. "In poor families, it's usually the eldest child who gets to have an education regardless of gender. The firstborn then goes on to be family breadwinner. This sets the tone for men to see women as equals."

It is no coincidence that Corazon Aquino, the nation's first female president, worked to democratize opportunities. Gloria Arroyo's tenure as the second female leader saw passage of the Magna Carta for Women Act in 2009, which set quotas for women in government.

Role models are important. Seeing female presidents, vice presidents (Duterte's No. 2 is a woman), and CEOs running giant conglomerates equips young Filipinas to dream in ways their Japanese, Korean and Singaporean sisters might not. In 2017, women held 30% of seats in parliament. About 40% of senior management positions were held by women in 2017, the best showing in Southeast Asia, according to Grant Thornton.

Caveats abound. A big one: A key reason for narrower gender gaps is the nation's remittance economy. Unfortunately, people have long been the Philippines' main export. More than 10% of Filipinos work abroad in Hong Kong, Dubai, Riyadh or elsewhere. Females out-number men by 54% to 46%.

For sure, this testifies to the strength of the extended-family network. It enables many women to have children while earning a healthy income. But talent heading abroad depletes the local labor pool.

Keeping more female talent at home would enliven gross domestic product. McKinsey estimates that creating greater opportunity for women would add $40 billion to annual GDP by 2025, a big jump in a $313 billion economy.

It is an Asia-wide problem. Take Japan, where Prime Minister Shinzo Abe spent the last six years pushing "womenomics" but achieved not a lot.

Abe was partly inspired by the argument that Japan's GDP would increase 15% if female labor participation matched that of men. While Abe made some progress -- the rate for women is now 70% versus 80% for men -- women are still paid far less than men and remain rare in top posts.

Meanwhile, for all Manila's successes, Duterte's team should do more to level the playing field further. As Professor Michael Daniels of Canada's University of British Columbia sees it, the Philippines is top of the class because gender is a government priority and companies generally embrace diversity. The best way forward is more of the same -- even more women in positions of power, training programs and well-paid jobs at home.

Despite the gains made by women with education and jobs, around half of Filipinas still do not McKinsey's advice is to focus on supporting lower-income women. Kristine Romano, McKinsey managing partner, and her team think the Philippines could do better in six areas: boosting access to family-friendly policies in the workplace; devising programs to improve gender balance in male-dominated industries; strengthening incentives for women to remain in the local workplace; lowering barriers to labor-force participation by young mothers and single parents; making creative use of financial services to empower less-educated women; drastically improve maternal health in rural areas.

The same would apply in spades to Manila's South East Asian neighbors, such as Indonesia (85th by WEF metrics) and Malaysia (101st).

The tendency in this #MeToo era is to view gender largely through the lens of fairness and human rights. But the dismal economics at play in the world's most vibrant region requires urgent attention. For policymakers looking for clues on what works, Manila is a good a place to start.