What China's rapidly expanding nuclear industry means for the West

Beijing understands how electricity can be used to build an empire The Karachi nuclear power plant: the low costs of the export reactors are underpinned by Chinese funding. (Photo from CNNC' press release)
CopyCopied

On Mar. 11, Pakistan inaugurated its most recent and largest civil nuclear power project with the opening of the 1.1-gigawatt plant in Karachi, doubling the capacity of Pakistan's four existing nuclear facilities. A second similar unit is due to come online in the coming months.

The event marked a significant step for Pakistan which needs additional capacity from all sources to bolster its existing inadequate power supplies. But even more important was the fact that the plant was built and will be operated by the state-owned China National Nuclear Corp. (CNNC), one of the companies leading Beijing's drive to join the very short list of countries with the capability to build and operate civil nuclear power projects around the world.

The development of China's nuclear industry over the last decade has been remarkable. With over 30 new reactors commissioned and another 16 under construction, China is now the main source of growth for nuclear power across the world.

With the U.S. and the European Union both pulling back from the use of nuclear power and Japan still constrained by the legacy of the Fukushima tragedy a decade ago, the expansion of China's growth has been crucial in maintaining nuclear's share of around 10% of global energy demand.

That growth is just the beginning. The objective is to create a closed cycle, self-reliant nuclear industry within China from the processing of uranium to produce fuel for the reactors through to construction and management of the operating plants. This is being achieved through the adaptation of international technology, in particular from Westinghouse into new Chinese designed reactors. In the process, the Chinese nuclear industry will reduce or eliminate the role of the foreign companies whose capabilities established the first wave of development.

The other part of the Chinese strategy is to create an export industry, with the plan focused on a range of countries lacking resources of their own and, in most cases, also lacking the technical skills to develop their own indigenous nuclear skills.

The Chinese plants will be low-cost, using techniques such as modular construction to put together reactors which are simpler than many of those being built in the West. The low costs of the export reactors will also be underpinned by Chinese funding through soft loans and generous long-term management contracts.

A decade ago, many in the Chinese industry saw the opportunity to participate in the renewal of the nuclear sector in Western countries, including the U.K., to build knowledge of the market.

The leading Chinese nuclear company, the China General Nuclear Power Group (CGN), formerly the China Guangdong Nuclear Power Group, joined the French state company Electricite de France (EDF) in the U.K. in funding a third of the Hinkley Point project. Their aim was to secure the opportunity to go on to build, own and operate a Chinese reactor in Britain, beginning with a new plant at Bradwell in Essex.

That project has now been set back by the deterioration in relations between Britain and China over Hong Kong, the exclusion of the telecommunications giant Huawei Technologies and the abuse of the Uighur community in the Xinjiang region of Northwest China. China's strategy of securing a foothold in the U.K. has, however, been overtaken by ventures across Asia, Africa and Latin America, where additional electricity is much needed to support growing populations. 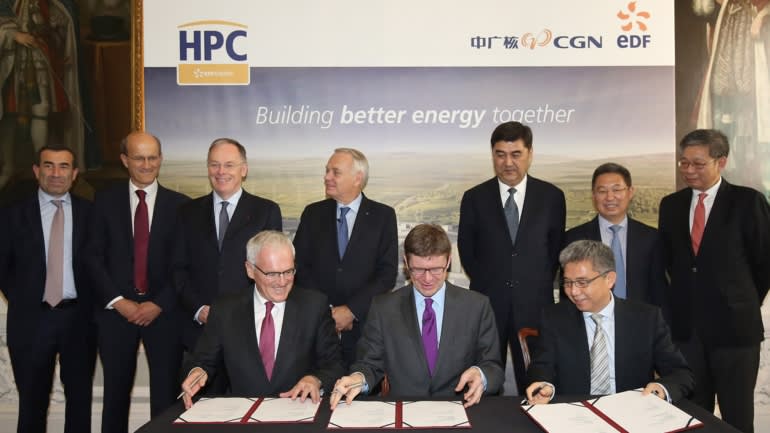 Chairman of EDF Group Jean-Bernard Levy, front left, Britain's Secretary of State for Business, Energy and Industrial Strategy Greg Clark, front center, and chairman of CGN He Yu, front right, attend a signing ceremony to finalize the deal to build Hinkley Point in September 2016 in London: the project has been set back by the deteriorated relationship between Britain and China.   © Reuters

The Karachi reactor is just the latest of these to come onstream, with the World Nuclear Organization listing a dozen different projects at the development or planning stage across a dozen countries from Argentina to Egypt in its recent survey. Many more are under discussion.

The development of skills and technical expertise by Chinese companies in the sector is, of course, backed by the full power of the Chinese state, including typically over 80% Chinese financing.

The development of infrastructure, including power supplies, is also central to the Belt and Road Initiative. Nor is the expansion is just through financing provided by the full range of state-to-state relationships to a degree unmatched by most of its competitors.

The Pakistan reactor, for instance, is just a project under the banner of the China-Pakistan Economic Corridor which includes many other projects, such as road and port developments. In the nuclear business, Russia remains the main competitor thanks to the extensive technical expertise of the state company Rosatom, but Moscow lacks the funds to match the full support for the major projects offered by Beijing.

The net result is that China, by pursuing its industrial aspirations, is creating a set of relationships and alliances, making full use of the fact that power supplies are crucial for the day-to-day operations of economic life. In the modern world, this is the way in which empires are built.