The one thing most Indians agree on is Beijing-style authoritarianism The Quad leaders on a monitor during the virtual meeting, pictured in Tokyo on Mar. 12: India's partners seem unfazed with India turning into a China lite.   © Kyodo
CopyCopied

On Mar. 12, a virtual meeting of the Quadrilateral Security Dialogue, known as the Quad, bringing together the United States, Japan, Australia and India, was convened by U.S. President Joe Biden, in the first multilateral summit he has hosted since taking office.

The Quad was first established by then U.S. President George W. Bush following the 2004 tsunami, and after a decadelong gap, was reconvened by Donald Trump in 2017 with the explicit aim of fostering a free, open and inclusive Indo-Pacific region.

The joint statement following the recent meeting reaffirmed this commitment, as well as noting the Quad leaders' support for presumptive shared values, such as the rule of law, and notably for democratic governance. In his opening remarks, Australian Prime Minister Scott Morrison went further, referring to himself and his counterparts as "four leaders of great liberal democracies."

And therein lies the elephant in the room. The Quad, without naming it, is attempting to create a counterweight to China in the region. With its one-party state, China is seen as a threat to liberal and democratic values, which apparently the four countries share. However, in its annual Democracy Report just a few days before the meeting, Swedish research center the V-Dem Institute downgraded India from a democracy to an electoral autocracy.

The reasons for the downgrade include an alleged degradation in freedom of expression, a less than free media, and increasing curbs on civil society, including the use of harsh defamation and sedition laws against critics of the government. The Swedish report comes hard on the heels of a similar about-face by the U.S. think tank Freedom House that earlier in March downgraded India from free to partly free, citing similar reasons.

While there is undoubtedly an element of selectivity and arbitrariness in such reports, and Western democracies are not immune from such failings, they have the advantage of generally well-functioning institutions embedded in the rule of law.

India's institutions are notably weak, having been irreparably damaged by former Prime Minister Indira Gandhi, most dramatically during her period of emergency rule from 1975 to 1977. Despite sweeping to power in 2014, and being reelected with an even bigger majority in 2019, on promises including improved quality of governance, current Prime Minister Narendra Modi has done the opposite, instead presiding over a further deterioration in the independence and integrity of institutions that could act as a check on executive power.

It is incontestable that Indians retain the right to vote freely and fairly in both national and state elections, and the outcome does not always necessarily favor the ruling party in New Delhi, although Modi's Bharatiya Janata Party has proved to be an unstoppable juggernaut in recent years.

Still, India's brand of democracy appears to be ever more illiberal and out of step with the pluralistic values that the four leaders pledged themselves to support in their recent joint statement. If anything, Modi is attempting to create a more homogeneous society and a more centralized state, directly threatening the country's federal system and pluralistic character, and ironically would turn India into a "China lite."

The truth is that most Indians, including political leaders of all stripes, are more supportive of the autocratic Chinese model of governance than the Western stereotype of India as the world's largest democracy would admit. Surveys by the U.S.-based Pew Research Center routinely show that many Indians would support rule by a "strong leader" or even by the military.

Specifically, their 2017 survey finds that 55% favor rule by a strong leader defined as one whose power is unchecked by parliaments or courts, one of the highest among the countries surveyed. Perhaps this helps explain why Modi's popularity continues to be sky-high in every survey despite the country's slide into illiberalism. 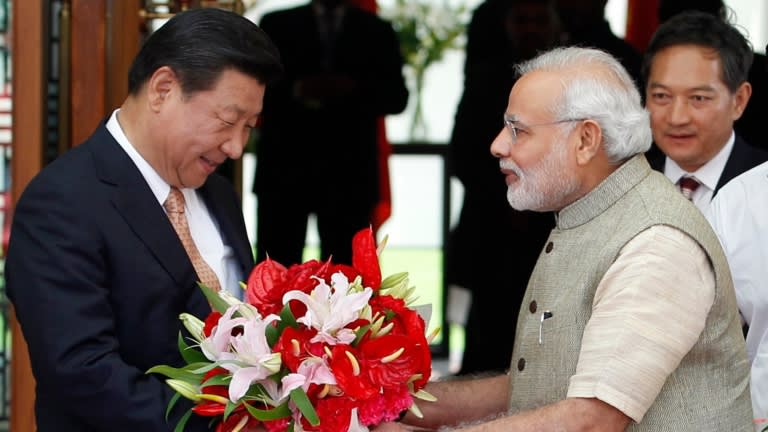 Narendra Modi presents a bouquet to Xi Jinping before their meeting in Ahmedabad in September 2014.   © Reuters

Modi himself, during his earlier avatar as chief minister of Gujarat, a western Indian state, was a big China booster. He visited at least four times as chief minister, and the Communist Party of China welcomed him with the highest level of protocol, going beyond what would be the norm for a regional leader, according to a 2011 posting from Modi's own personal webpage.

Modi himself was fulsome in his praise for the Chinese, again in 2011, asserting that "China and its people have a special place in my heart." And judging by Modi's more recent actions, he evidently sees Chinese state capitalism as a viable economic development model for India, as I have argued in the article "Modi risks turning India into a nation of gangster capitalists" published in Nikkei Asia on Feb. 5.

India's partners in the Quad seem unfazed with India turning into a China lite, despite their pro-democratic rhetoric. If a more authoritarian India manages to jump-start its economy and increase its military prowess, thus making it a more credible counterweight to China, realpolitik will prevail and all of the talks about shared values will be revealed to be just window dressing.

The Quad has been called Asia's "democratic security diamond" and a bulwark against China. Ironically, if it succeeds, the Quad's objectives may be achieved as India becomes more like China and less like its Western democratic peers.