Who is Myanmar's coup leader and what does he want? 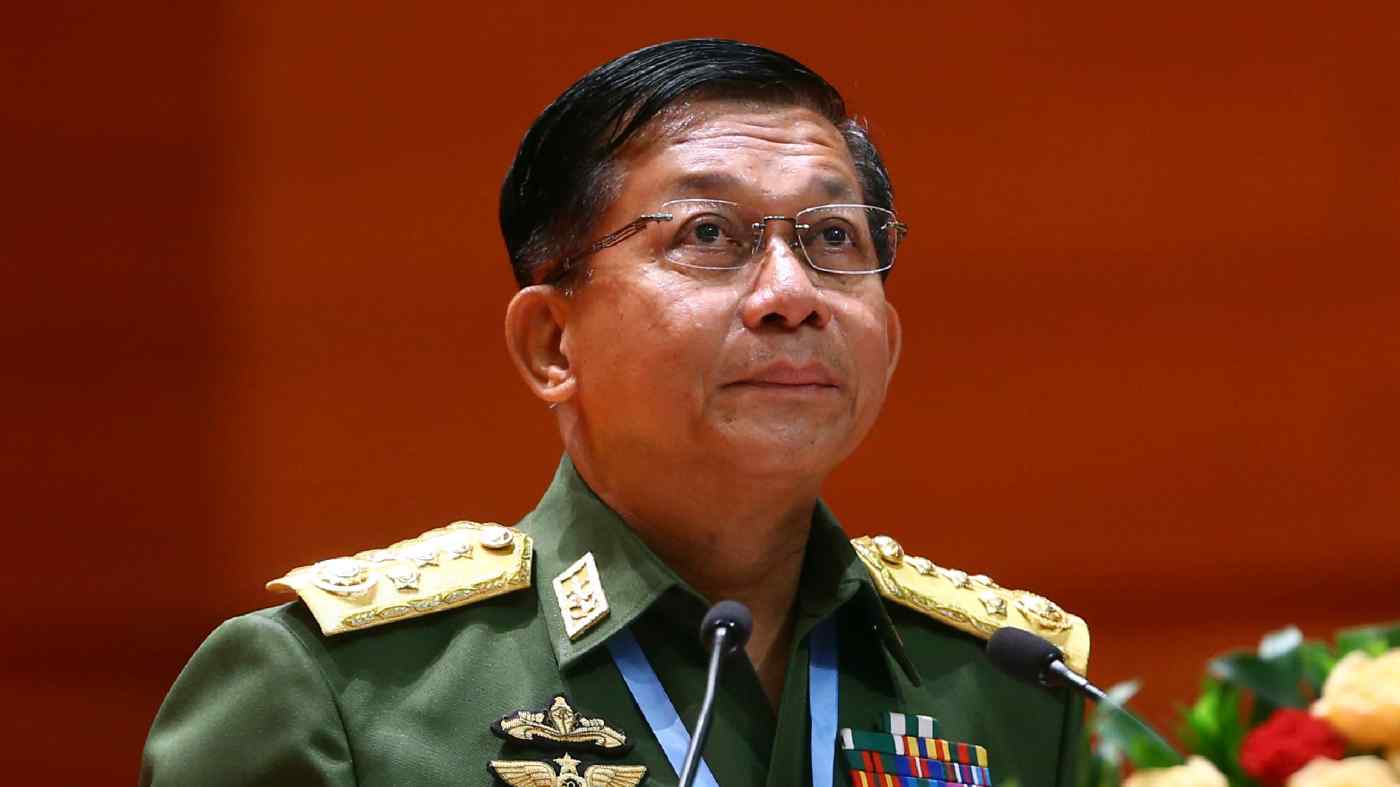 The commander in chief, Senior Gen. Min Aung Hlaing, pictured in July 2018: who is he, what is he like and what is he up to?   © AP
CopyCopied

Nicholas Coppel is a retired Australian diplomat who served as ambassador to Myanmar from 2015 to 2018.

In the Western world's rush to condemn Nobel laureate Aung San Suu Kyi for the forced exodus of more than 700,000 Rohingya Muslims from Myanmar's Rakhine State into Bangladesh, little was said about the role and responsibilities of Myanmar's commander in chief, Senior Gen. Min Aung Hlaing.

Now that he has mounted a coup and toppled the world's fallen democracy icon, there have been numerous international calls for Suu Kyi's release from arbitrary detention, including a United Nations Security Council resolution on Feb. 5. Only now is the world asking questions about the senior general: Who is he, what is he like and what is he up to?

It is worth going back to the Rohingya crisis to get the measure of the man. Under the military-drafted 2008 constitution, the senior general chooses the ministers for defense, border affairs and home affairs. The commander is not answerable to any civilian or other authority and holds a monopoly on the coercive power of the state.

The 2017 attacks on the Rohingya and their villages forced them to flee to Bangladesh where they continue to languish in squalid refugee camps in Cox's Bazar. Be in no doubt; this was the work of the senior general and Rakhine ethno-nationalists. And yet the world turned against Suu Kyi and made her responsible. Little attention was given to Min Aung Hlaing whose only punishment was to be sanctioned by a small group of countries.

Even the better informed argued that Suu Kyi could have at least said something and not defended her country against claims of genocide before the International Court of Justice at The Hague. That may be correct, but the Rohingya would still be in refugee camps unable and unwilling to return, and it perpetuates our problem of seeing everything that happens in Myanmar in terms of Suu Kyi. The world's focus should always have been on Min Aung Hlaing.

The Feb. 1 coup has rightly put a spotlight on Min Aung Hlaing. He is the man responsible for the forced exodus of the Rohingya and the end of Myanmar's nascent quasi-democracy. When I met with him to convey formally the Australian government's views, he showed no remorse for the disproportionate use of force against the Rohingya. Enthroned in an elaborately carved chair, he lectured me for over an hour before I had an opportunity to speak. His lengthy monologue was all about how the Rohingya do not belong in Myanmar and aim to take over Rakhine State.

With the senior general now holding absolute power, the bleak outlook for the Rohingya has become even more so. Safe repatriation will be out of the question even if it is offered. One million long-suffering Rohingya are destined to spend many more years without hope detained in Bangladesh's refugee camps.

The outlook for democracy in Myanmar also is bleak. Min Aung Hlaing claims that the electoral roll was compromised and the election commission was not taking seriously complaints of voter fraud and other irregularities. He has sought to make out that his actions were constitutional and has said fresh elections will be held after a yearlong state of emergency. Few people in Myanmar share his assessment or support his actions.

I believe he is likely to keep his word and hold elections after one year as this is his exit strategy and pathway to the presidency. The military-backed Union Solidarity and Development Party (USDP) will win 25% of the seats either directly or in a coalition with like-minded minor parties. That is all they need to form a government because the commander in chief personally appoints another 25% of the members of parliament in both the upper and lower houses. It was only ever a quasi-democracy.

The USDP will win because the military has already appointed a new Union Election Commission who have responsibility for preparing for and conducting elections. They have a challenging task as in 2020 the USDP won just 7% of the contested seats while the NLD won a resounding 83%.

Trumped-up charges have already been laid against Suu Kyi and other National League for Democracy leaders, and the compromised courts will find them all guilty which will prevent them from contesting future elections. And even in the unlikely event that the courts and election commission do their job impartially and professionally, Suu Kyi's NLD will most likely boycott the next election. With justification, she will argue that the NLD is the legitimately elected government and should be allowed to govern without having to go back to the people. When it comes to matters of principle, Aung San Suu Kyi is resolute. 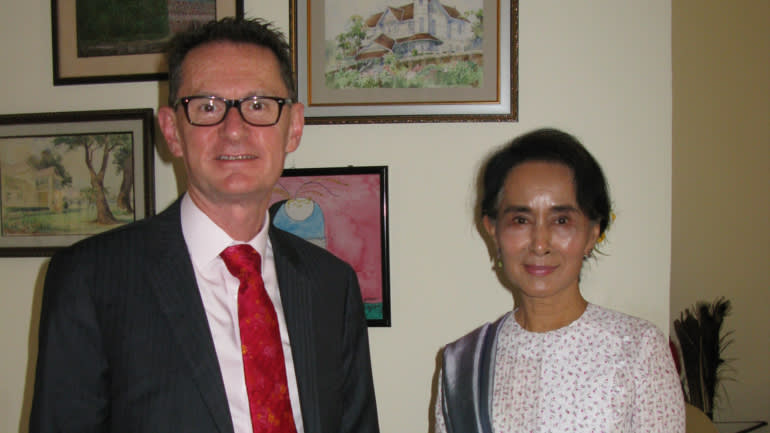 Ambassador Nicholas Coppel with future State Counsellor Aung San Suu Kyi in 2015. Her concerns then that the military would be dishonorable were realized in 2021. (Photo supplied by the author)

I met Suu Kyi on numerous occasions both public and private. In public, she is invariably charming and eloquent. In private, she always holds her ground and rarely concedes a point. In the lead-up to the November 2015 elections, Suu Kyi frequently invited me and several other ambassadors with aid programs supporting democratic elections to her home on Yangon's University Avenue. There, squeezed in around the dining table, she lectured and questioned us for hours on every detail of the election commission's preparations for the upcoming voting.

Suu Kyi did not trust the USDP government to conduct fair elections. And then, after her party overwhelmingly won, she feared the results would not be honored. She urged the jubilant crowds of NLD supporters to be more restrained, and in the long five months before the formal handover of power she did not meet with the media or announce her ministerial lineup.

Suu Kyi feared anything she might say or do could provoke the military to step back in and void the elections, or ignore them as they did in 1990. We diplomats did not share her fear but accepted her jitteriness as the product of 15 years of house arrest and proximity to men with guns. On Feb. 1, the world realized she was right to be afraid.

While Suu Kyi is resolute, Ming Aung Hlaing is stubborn. He will not back down and having set in train a series of events he will see them through. He wants Myanmar to return to the 2011-16 USDP style of government when military personnel took off their uniforms and donned civilian clothes to take up government positions. This is his idea of the "disciplined democracy" envisaged in the 2008 Constitution.

The big questions are will the civil disobedience movement be sustained and remain peaceful, and will the police and armed forces continue to avoid a showdown? Min Aung Hlaing sees his forces, the Tatmadaw, as the praetorian guards of national unity and stability and will step in if there is rioting or violence. But if there are orders to use force against unarmed civilians then we might see internal dissent among Myanmar's military.

The sort of crackdown on protesters seen in 1988 would put Ming Aung Hlaing's position as commander in chief at risk of a challenge. Many electorates with a strong military presence voted for the NLD and unquestioning support from the rank and file soldier for the senior general cannot be taken for granted.

Opposition to the coup is about supporting the people of Myanmar and their transition to democracy. To go light on the senior general because he is opposed to Suu Kyi would be a serious misreading of the situation, past and present.