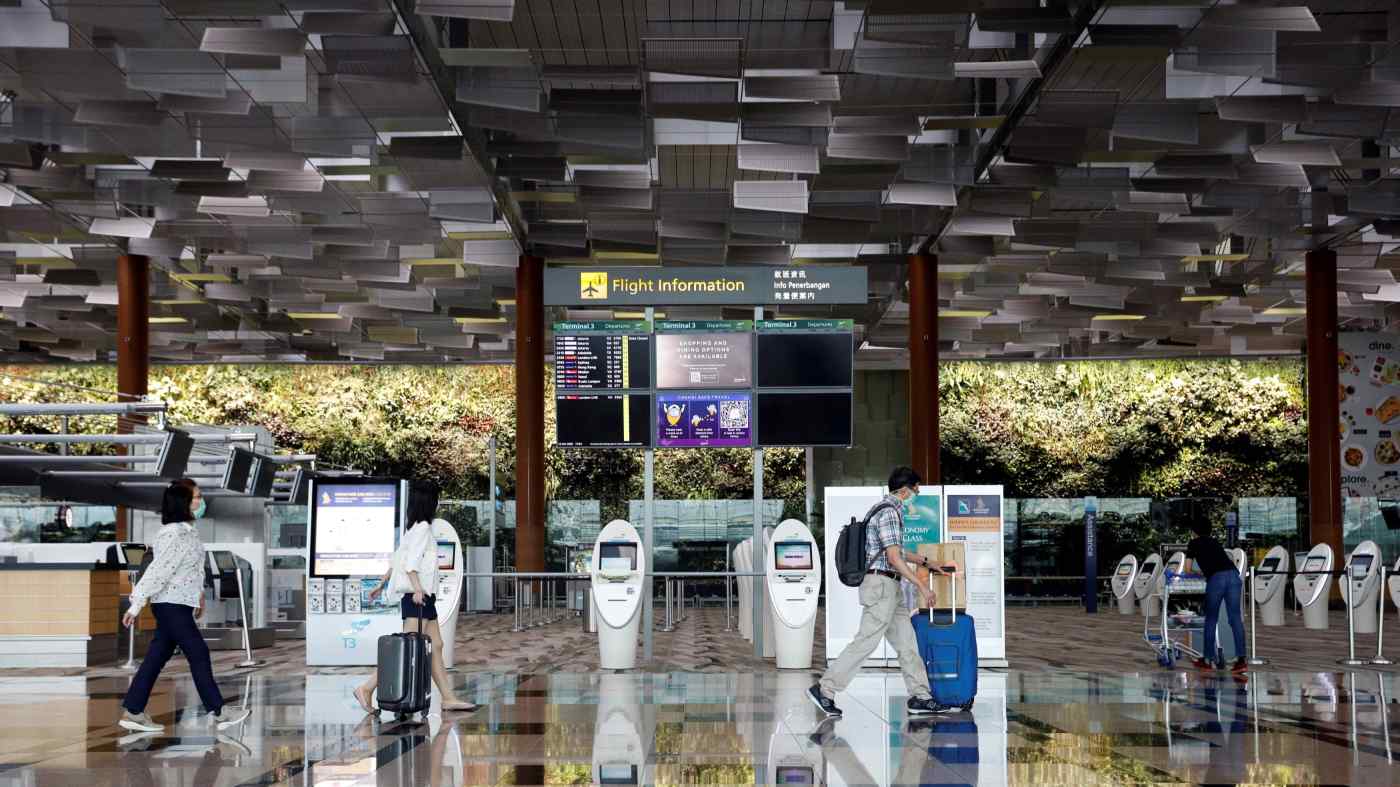 The departure hall of the Changi Airport in Singapore, pictured on Oct. 12: the costs of international travel restrictions grow with each passing month.   © Reuters
CopyCopied

A rare sense of COVID-era optimism coursed between Singapore and Hong Kong last week, on news of a mooted two-way travel bubble. The prospect of business trips without irksome quarantine rules, or even a Christmas holiday, suddenly seemed a little less distant for millions of marooned residents of the two Asian city-states

That optimism is welcome, but a healthy dose of caution is still needed. Long-promised bubbles are starting up around Asia. But they will likely involve small numbers of travelers, at least at first, while remaining vulnerable to rapid closure in the event of even a slight disease uptick.

More to the point, these tentative easing signs only serve to underline a tricky dilemma facing many regional leaders: the more successful their pandemic-fighting record, the greater the costs if reopening brings a resurgence. This in turn risks something akin to a COVID winner's curse, where ultra-cautious governments reopen too slowly, and at a substantial economic cost.

It is worth pausing to ask why these travel agreements have taken so long to arrive. Talk of a trans-Tasman bubble began circulating in the pandemic's early weeks. But the arrangement only began on Oct. 16, and then only one-way, allowing a small number of New Zealanders to travel to Australia. The mooted Hong Kong and Singapore deal is full of caveats too, allowing both sides to control numbers and suspend its operation at the first sign of trouble.

Elsewhere within the so-called green zone nations, Asia is reopening slowly too. Countries like China and Japan have business "air bridges," but these come with strict testing and quarantine rules fit to put off all but the most determined travelers. These restrictions are partly due to the technical difficulties of managing mass travel without infection spikes. But a lot still comes down to politics, given the risk that any loosening might bring the nightmare scenario of a minor outbreak that then spirals out-of-control, as happened in the Australian state of Victoria.

These political costs are real. Jacinda Arden's thumping New Zealand election victory shows the dividend that can flow to leaders who successfully suppress the virus. The opposite is true in Malaysia, whose once impressive record is now being subsumed in a new wave of infections, leading to much criticism of its government. Polling evidence suggests in general that anxious citizens still support harsh antivirus measures.

Yet this ultra-cautious approach comes with two big problems, the first being its obvious economic cost. This is especially true in countries that rely on commercial travel, like Singapore, or tourism, like Thailand. Indeed, the ongoing street protests in Bangkok only underline the risks that citizen frustration at weak economic performance may gradually boil over into wider political unrest.

The second problem is a growing imbalance in Asia's approach to internal and external movement. Even as international travel remains in effect banned across much of the continent, uncontrolled internal movement is being encouraged in countries like Malaysia and Thailand, not to mention China, where 600 million people traveled during the recent Golden Week holiday.

It is far from clear that this policy makes sense, a point made recently by Jayant Menon, a former senior official at the Asian Development Bank. Internal travel is less of a worry in tiny countries like Hong Kong. But its risks are clear from Malaysia, whose new outbreak is being blamed on politicians crisscrossing the country to attend campaign events during a recent state-level election. Other countries pushing internal travel have seen upticks too, including Japan. "By encouraging domestic tourism, which does not require testing or quarantine, to offset the shortfall from international arrivals, which usually does, health risks could actually be increased," Menon suggests. Tourists walk along the commercial streets near the Ise Jingu shrine on Sept. 8: Japan launched in July $12.2 billion in travel subsidies aimed at throwing a lifeline to the hospitality industry.   © Sipa/AP

It goes without saying that the reopening dilemma faced by many Asian politicians is still far more pleasant than the grim choices facing their counterparts in Europe and the United States. Europe in particular provides a salutary reminder of the risks that greater movement can bring, especially in the absence of protective factors like mask-wearing and functioning contact tracing systems.

Even so, the dilemma faced by successful Asian nations only serves to illustrate the ongoing tension between COVID-fighting success and economic recovery. Politicians like to say there is no contradiction between protecting "lives and livelihoods." This is true to the extent that countries that have managed to control the virus have generally done better economically too. But there are undeniable costs to protecting unblemished COVID records. In theory, at least, the economic benefits of more rapid international reopening may be worth taking, even were they to result in small increases in infection rates. This is especially so in countries whose testing and tracing regimes work well enough to give confidence that small outbreaks are less likely to spiral out of control.

Some of this dilemma may be solved by easier and cheaper mass-scale testing regimes, which could let international travelers prove they are COVID free at regular intervals. Still, with most experts suggesting that a vaccine is unlikely to be widely available until at least the middle of next year, and potentially longer, the costs of international travel restrictions grow with each passing month. Asia's political leaders can rightly be proud of their pandemic fighting successes. But they should not be preserved at any cost.