Trump's most impactful legacy may be trashing that dollar in ways that set up Xi's currency to fill the void.   © Ulrich Baumgarten/Getty Images
CopyCopied

China's currency is having an unexpected moment as Donald Trump's economy stumbles.

Few things scare Xi Jinping's China more than a rising exchange rate. Like his predecessors, President Xi has clamped down ruthlessly on speculators bidding up the yuan. Beijing is hardwired to fear the smallest loss of export competitiveness.

Since June, though, Team Xi has been surprisingly tolerant of Asia's best-performing currency. This quarter alone, the yuan is up about 4%. This raises two questions. Is the yuan's rally for real or a fluke? And what do currency dynamics say about the China-U.S. brawl upending world markets?

The first answer is yes, this is real. Though China opened 2020 with the worst showing in 30 years, it is seen growing about 2% by year-end. That is a very far cry from the 6.8% contraction in the January-March quarter. It is an even bigger divergence from a U.S. economy sinking under the weight of nearly seven million COVID-19 infections. "The headwinds are building on the dollar and the U.S. economy," says strategist Win Thin at Brown Brothers Harriman.

Recoveries in Chinese exports, industrial production, and retail sales jibe with claims that Beijing has gotten coronavirus under control. On top of that, investors are optimistic Chinese debt will soon be added to more global indexes, with the FTSE Russell poised to act as early as Thursday. Nor has the People's Bank of China been the overbearing presence in markets that the U.S. Federal Reserve, the Bank of Japan and others have been.

Beijing, in other words, is sanctioning a rising yuan. Perhaps not wholeheartedly, China on Tuesday set its daily yuan fixing at a slightly weaker-than-expected level. Even so, the PBOC is taking a surprisingly hands-off approach to currency trends.

This gets us to the second question: the trajectory of the China-U. S. trade war. Some of Xi's acceptance of a rising yuan is Trump-related. Over the past three years, the U.S. president has waged an ever-escalating battle with Beijing. What started with tariffs on hundreds of billions of dollars of mainland goods has now pivoted to strangling smartphone apps popular with teenagers.

And nothing would provoke Trump further, or faster, than the yuan sliding against the dollar. For all the macroeconomic reasons to be bullish on China's currency, there are some micro rationales for a weaker exchange rate. Chief among them: cracks in China's $4 trillion-plus corporate debt market. Delinquencies are rising ahead of the $530 billion of securities maturing later this year.

Yet Xi's government has clearly decided that the drag from a rising currency is better than fresh attacks from Washington. Earlier this week, Trump demonstrated why, when he admitted he has a mind to effectively devalue the dollar. "I go to my guys, 'What about doing a little movement on the dollar?'" Trump told supporters in Dayton, Ohio, admitting that he was rebuffed by his economic advisers. "'Sir, we can't do that. It has to float naturally.'" 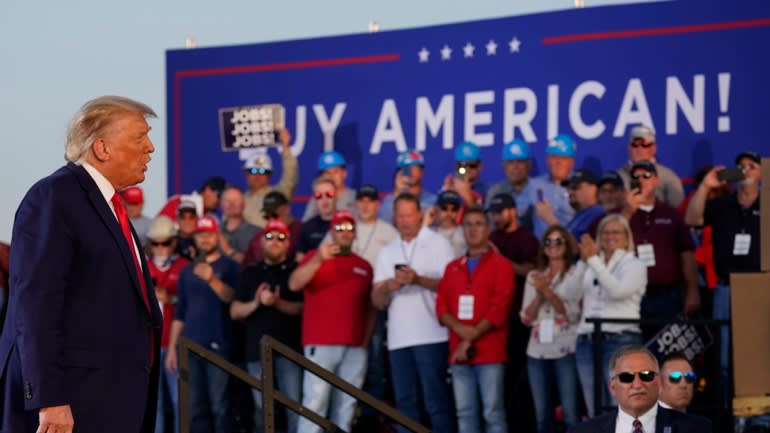 Donald Trump speaks at a campaign rally at Dayton on Sep. 21: nothing would provoke Trump further than the yuan sliding against the dollar.   © AP

We learned in May that Trump, who has a long, sordid history of past bankruptcies, mulled canceling part of the nearly $1.1 trillion of U.S. Treasury securities China holds. Making it sound all the more plausible: Trump, on the campaign trail in 2016, suggested he might consider defaulting on U.S. debt. Yet Xi's patience with a firmer yuan is a smart strategy at a moment when Trump is undermining the world's reserve currency.

Long before Trump stumbled into the White House in January 2017, Xi was angling to supplant the dollar. Case in point: getting the yuan in 2016 included in the International Monetary Fund's top-five currency club, joining the dollar, yen, euro and pound.

Trump's most impactful legacy may be trashing that dollar in ways that set up Xi's currency to fill the void. At the moment, Washington gets away with its rogue behavior because the dollar is the linchpin of global finance. Downgrading America's credit rating now could devastate markets. This mutually-assured destruction dynamic is enabling Trump's worst impulses.

The yuan-versus-dollar debate is illuminating in other ways. Has Xi been the epochal reformer many claimed he would be? Hardly, given the ways in which exports, state-owned enterprises, and the shadow banking industry still dominate the economy. Or the bull market in media and internet censorship on Xi's watch.

Yet Xi's government is investing trillions of dollars to become the global leader in software, microprocessors, renewable energy, electric and self-driving vehicles, and artificial intelligence. Building economic muscle, in other words.

Trump, by sharp contrast, makes fun of windmills, browbeats Detroit to make less fuel-efficient cars, and endeavors to bring back coal. Xi's economy is raising its game. Trump's game plan seems to be tripping China near the finish line. Here is why the rising yuan may spell trouble for Trump's legacy. And build the global clout Xi's China craves.