Why Koizumi's 'It's Now or Never' shtick fell flat

20 years on, the economy the former PM envisioned has left the building 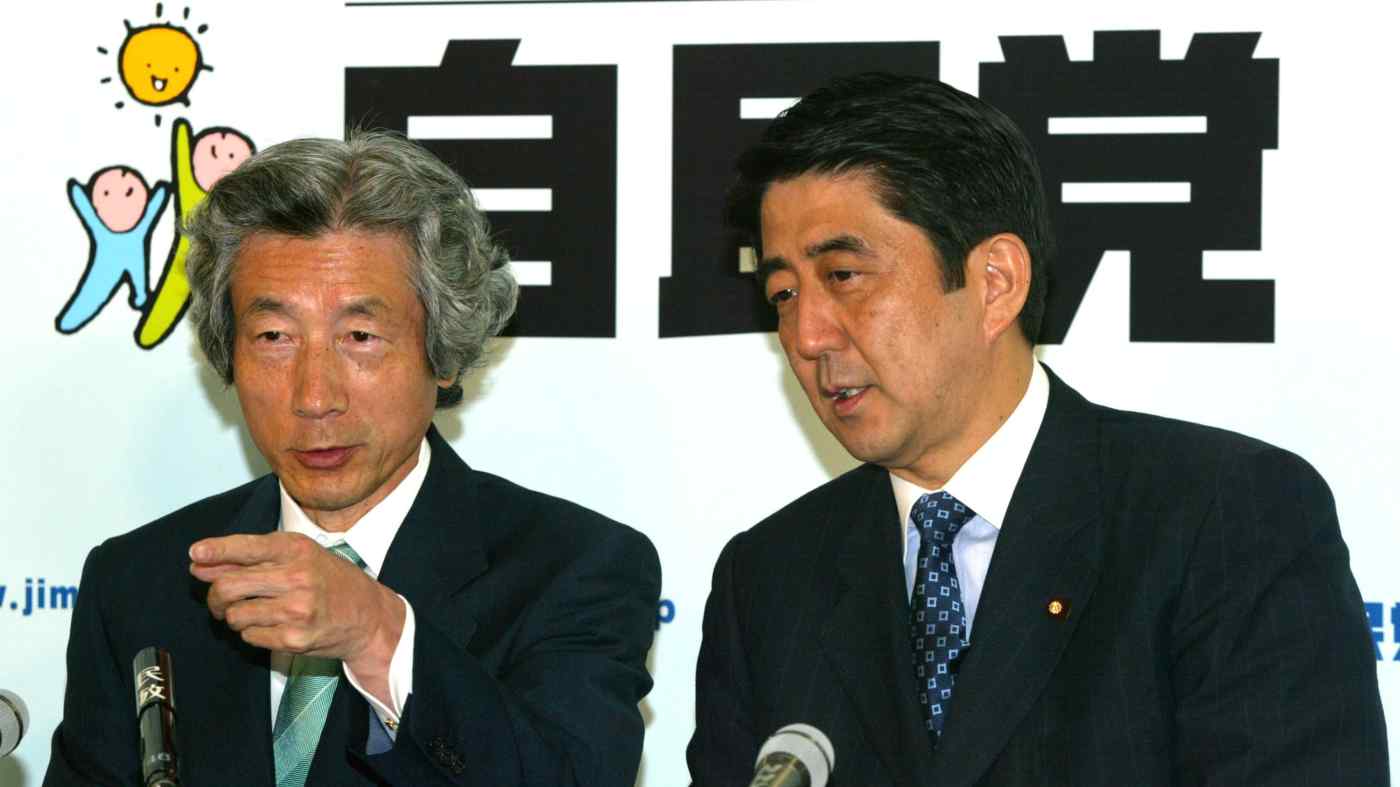 The Junichiro Koizumi memory that most resonates all these years later: the Elvis Summit.

In July 2006, the world leader with one of the best manes of all time, Japanese Prime Minister Koizumi, joined U.S. President George W. Bush at Graceland in Memphis, Tennessee. There, with Elvis Presley's widow Priscilla and bewildered global media members looking on, Koizumi donned The King's sunglasses, played air guitar and crooned lines from "Love Me Tender" and "Fools Rush In" in the infamous fur-chaired Jungle Room.

Today, the 20th anniversary of the start of arguably Japan's most consequential premiership in decades, Koizumi's antics in Tokyo circles from 2001 to 2006 seem no less entertaining -- or consequential.

Shinzo Abe was around longer -- nearly eight years -- but posterity will accord much greater weight to Koizumi's tenure. Abe's mentor did more to upend Tokyo's staid political dynamics and put real structural reforms on the books. He was the rare populist who actually used his charisma to improve things. Junichiro Koizumi does his Elvis Presley impersonation for Priscilla, second left, and George W. Bush, right, in the Jungle Room of the late singer's home in Memphis in June 2006.   © Reuters

Abe talked a great game of knocking down bureaucratic walls, painful deregulation and smashing vested interests. So is Prime Minister Yoshihide Suga now. But maverick Koizumi wrote the book from which Abe and Suga cribbed.

Case in point: privatizing the ginormous Japan Post. For years, this state-owned giant with some 400,000 employees and 25,000 branches embodied the bloat and graft that led to Japan's 1990s bad-loan crisis and undercut reform efforts.

Japan Post's centerpiece was the world's biggest savings institution with trillions of dollars in assets. The postal savings bank was the place where politicians, using a variety of financing schemes, went to fund pet projects in home districts.

Along with getting politicians' hands out of their corrupting piggy bank, Koizumi prodded banks to own the magnitude of their bad loans from the 1990s and write them down. He took on the "construction state," plotting 10% reductions in both public-works spending and government debt. He took on the powerful farm lobby, the social-security bureaucracy, the medical establishment and other, in Koizumi's words, "sacred cows."

It was not just what Koizumi attempted, but how. He defied the party-politics formula of behind-the-scenes consensus-building by appealing directly to the people. He harnessed his immense popularity, Richard Gere-like good looks and "Lionheart" newsletter to shame dueling factions in parliament into backing reform.

I do not mean to, well, lionize the man. The Koizumi era is its own cautionary tale of what could have been. His support for Bush's disastrous 2003 Iraq invasion -- even navigating around the pacifist Constitution to send troops -- did not age well.

Ditto for Koizumi's visits to Tokyo's Yasukuni Shrine, where Japan's war dead are interned along with war criminals. That spoiled relations with China and South Korea. And though Koizumi is now an anti-nuclear power activist -- post-Fukushima crisis -- he too championed the "reactor economy."

Yet Koizumi's biggest mistake may be his choice of successors: Abe, who in his first stint as prime minister in 2006 shelved economic reforms in favor of national security pursuits. He lasted a year, setting up a cycle of leaders coming and going in an instant. Posterity will likely not spend much time on the governments of Yasuo Fukuda, Taro Aso, Yukio Hatoyama, Naoto Kan, Yoshihiko Noda, Abe 2.0, and even today's Suga administration.

One reason why it is worth retracing Koizumi's steps is that he centralized power in the prime minister's office, laying the groundwork for a strong reformist to engineer big change. Instead, we can draw direct lines from that era to today's political paralysis.

Koizumi, of course, bequeathed us both Abe incarnations. It was Koizumi ally Toshihiro Nikai, the No. 2 Liberal Democratic Party official, who helped guide Suga into the top job. When Suga grabbed the baton from Abe last September, political wonks thought they sensed a big dose of Koizumi in his policy goals. Suga, after all, served as Koizumi's senior vice-minister for internal affairs and communications. So far, though, Suga has read more from Abe's playbook: all carrots and no sticks.

Abe returned to office in 2012 with bold talk of loosening labor markets, cutting red tape, incentivizing a startup boom and empowering women. Mostly, though, he relied on aggressive central bank easing and old-school trickle-down economics. Abe figured staging a spectacular Olympics alone would propel Tokyo into the future. As a result, Suga is the eighth government since Koizumi's struggling to eradicate deflation.

All this makes for a maddening mind experiment. What if Abe 1.0 had accelerated Koizumi's reforms 15 years ago, instead of tossing them into the office drawer? Japan might be putting more tech unicorns on the board. It might not trail Angola and Sri Lanka in gender equality. It might be the alternative headquarters site as China strangles Hong Kong.

If Koizumi's disciples had relied less on a weaker yen, Japan Inc. might have done more to raise its competitive game, Germany-style. If they had taken on Tokyo's change-averse bureaucrats, Japan might not be last in the class among developed nations on COVID-19 vaccinations.

Again, Koizumi, now 79, had his fair share of missteps and lost opportunities. Yet he showed the LDP the power of focusing on an overarching reform or two to inspire the sense that great change is doable. Rather than reawaken Japan's animal spirits, the eight governments since Koizumi tried to shove the genie back into the proverbial bottle.

In 2001, Koizumi actually put out an album: "Junichiro Koizumi Presents: My Favorite Elvis Songs." Though it contained all the usual-suspect Elvis classics, Koizumi at the time joked that we should pay special attention to why he included "It's Now or Never." If only the parade of leaders since then had, too.