Why Myanmar's generals turned back to a dark past 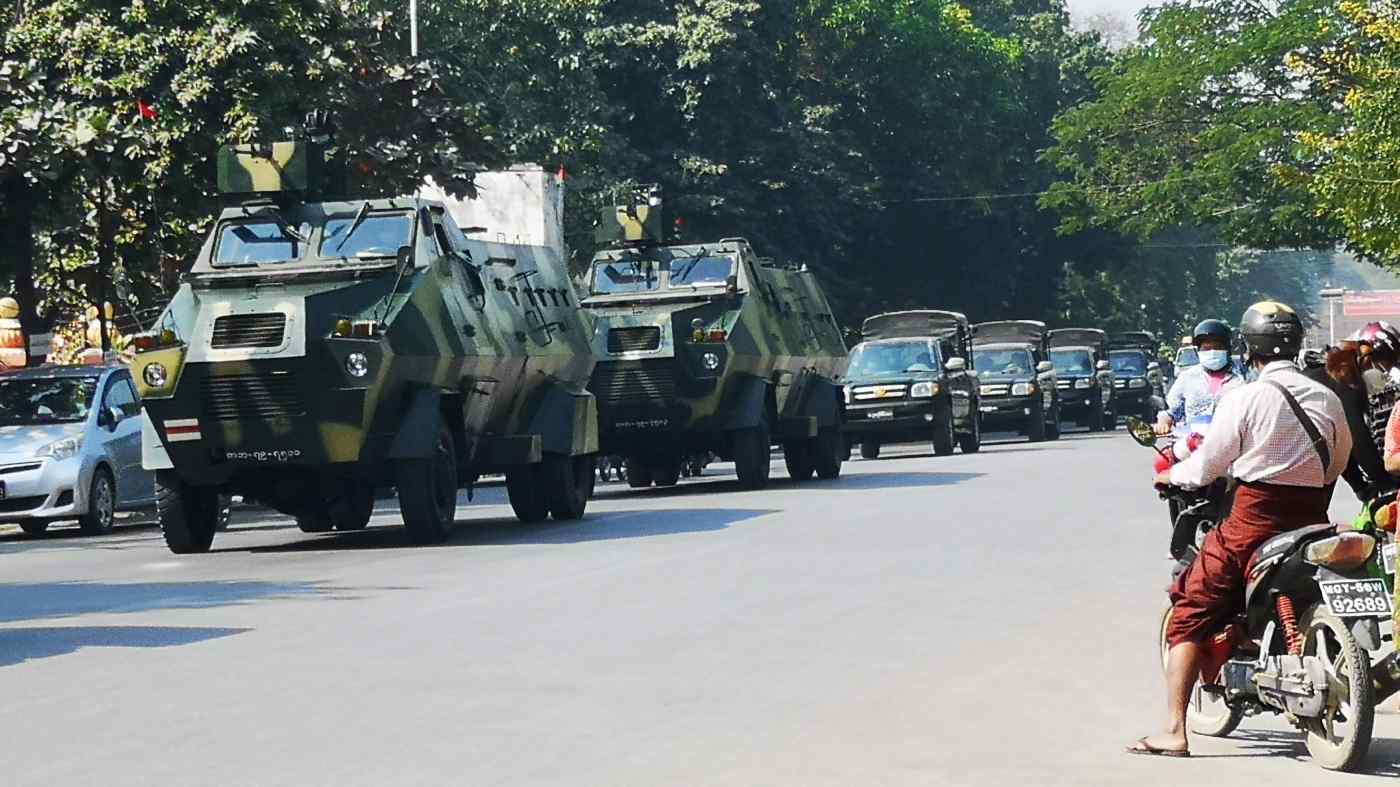 Armored vehicles drive past a street in Mandalay on Feb. 2: the Tatmadaw is ready to give up diplomatic, trade and investment gains for the sake of domestic control.   © Reuters
CopyCopied

Myanmar awoke on Monday to the news that State Counselor Aung San Suu Kyi, President Win Myint and other key political figures and civil society leaders had been arrested by the army, known as the Tatmadaw.

A 12-month state of emergency led by Myanmar's commander in chief, Senior Gen. Min Aung Hlaing was announced, troops were moved into strategic positions across key cities, phone lines were cut and the internet was curtailed.

With executive power now in the hands of the military -- reminiscent of similar military actions in 1962 and 1988 -- the seizure of power put an end to Myanmar's democratic transition that began in 2008 with the adoption of a hybrid constitution that shared power between elected politicians and the military.

The new constitution set the stage for dubious elections in 2010, and the formation of a government steered by former general Thein Sein and the ruling military-affiliated Union Solidarity and Democracy Party, with Suu Kyi's National League for Democracy and other political parties gradually brought into the fold.

After the NLD won the November 2015 elections in a landslide, active military officers led by Min Aung Hlaing suddenly found themselves having to share power with Suu Kyi and other democratically elected leaders. But when the NLD won a second landslide last November, the military and the USDP bitterly contested the results in a rising spiral of threats that culminated in Monday's coup.

Why the Tatmadaw would turn back its own political experiment is difficult to fully grasp. With the Trump-like claims of widespread voter fraud dismissed by the Union Election Commission, the coup is more the result of a complete breakdown in trust and communication between the NLD and the Tatmadaw. Believing that its civilian, elected partner, had gained too much of an advantage in the fragile power-sharing arrangement, the military decided that the rules of the game had to be suspended and redrafted.

The exact reasons for the breakdown in trust are unclear. Widely expected to retire this year, various sources suggest that Min Aung Hlaing in fact wanted to become president following the November elections and be elevated alongside Suu Kyi who would have remained State Counselor -- a position specially created to circumvent a bar on her becoming president.

Other factors that might have angered the military include the NLD declining to hold regular meetings of the National Defense and Security Council and its refusal in late 2020 to hold elections in Rakhine State despite Japanese mediation leading to a dialogue between the Tatmadaw and the ethnic Rakhine insurgent group, the Arakan Army. It remains unclear whether Suu Kyi and the NLD could have avoided the current situation, and what compromises with Min Aung Hlaing and the Tatmadaw that would have entailed.

Based on Myanmar's recent history, few palatable options lie ahead. In 1990, the military ignored the election results. Suu Kyi, under house arrest since 1989, would not be released until 1995. It took more than two decades for the military to relinquish full executive power through a long-winded constitution-drafting process. Aung San Suu Kyi speaks with supporters outside her home after released from house arrest on Nov. 13, 2010.   © Reuters

During those two decades, the international community tried to influence the military with some carrots, but mainly sticks, including blanket international sanctions with little evidence that such measures were effective. What led Myanmar's generals to finally agree to share power had more to do with needing to offset China's growing economic power.

Democracy was the price they had to pay in order to diversify Myanmar's relationships beyond China with the U.S., the EU and Japan. Now, for the sake of wresting back domestic control, the present coup suggests that the Tatmadaw is ready to give up the diplomatic, trade and investment gains of the last decade.

The new Biden administration has indicated that it will punish Myanmar if the military does not reverse course, but while targeted, if not blanket, sanctions are likely, their effectiveness is doubtful. As in the past, sanctions will turn away international investors and lead to the suspension of aid programs -- hurting the people and economy more than the Tatmadaw.

The coup will also impact Myanmar's regional relationships, dealing a blow to the 10-member Association of Southeast Asian Nation's constructive engagement approach. China, which had built bridges with Suu Kyi and the NLD in recent years, will only benefit marginally from the new situation, as the fiercely nationalistic military government will not accede easily to Beijing's demands.

There are also concerns that popular demonstrations will erupt across the country with violent crackdowns to follow, similar to what happened in 1988, or during the Saffron Revolution in 2007. The military will not hesitate to deploy battlefield hardened troops in urban centers to crush such movements, and has preemptively arrested civil society and political leaders. United behind its leaders, there is little possibility of a split within the ranks of the Tatmadaw.

Justifications for previous military coups included protecting the Union from threats of secession in 1962, or to restore a breakdown in law and order in 1988. In 2021, Myanmar's people woke up to a state of emergency because the Tatmadaw felt that the "terrible fraud in the voter list... runs contrary to ensuring democracy."

But the Burma of 1962 or 1988 is not the Myanmar of today, with its high internet penetration, near saturation engagement with social media platforms such as Facebook, the full integration of foreign companies in the telecoms, energy, financial and consumer sectors, and an educated middle class that knows the benefits of being open to the world.

The coup -- and isolation due to COVID-19 -- suggest that Myanmar is heading back toward a dark past. Conscious of history's lessons, many citizens are staying indoors and exhorting each other on social media not to provoke the military further. Still, a strong international backlash is inevitable, as is domestic resistance in many forms. Will these responses affect Myanmar's most powerful institution?