Why the world should applaud Narendra Modi's 2070 net-zero target 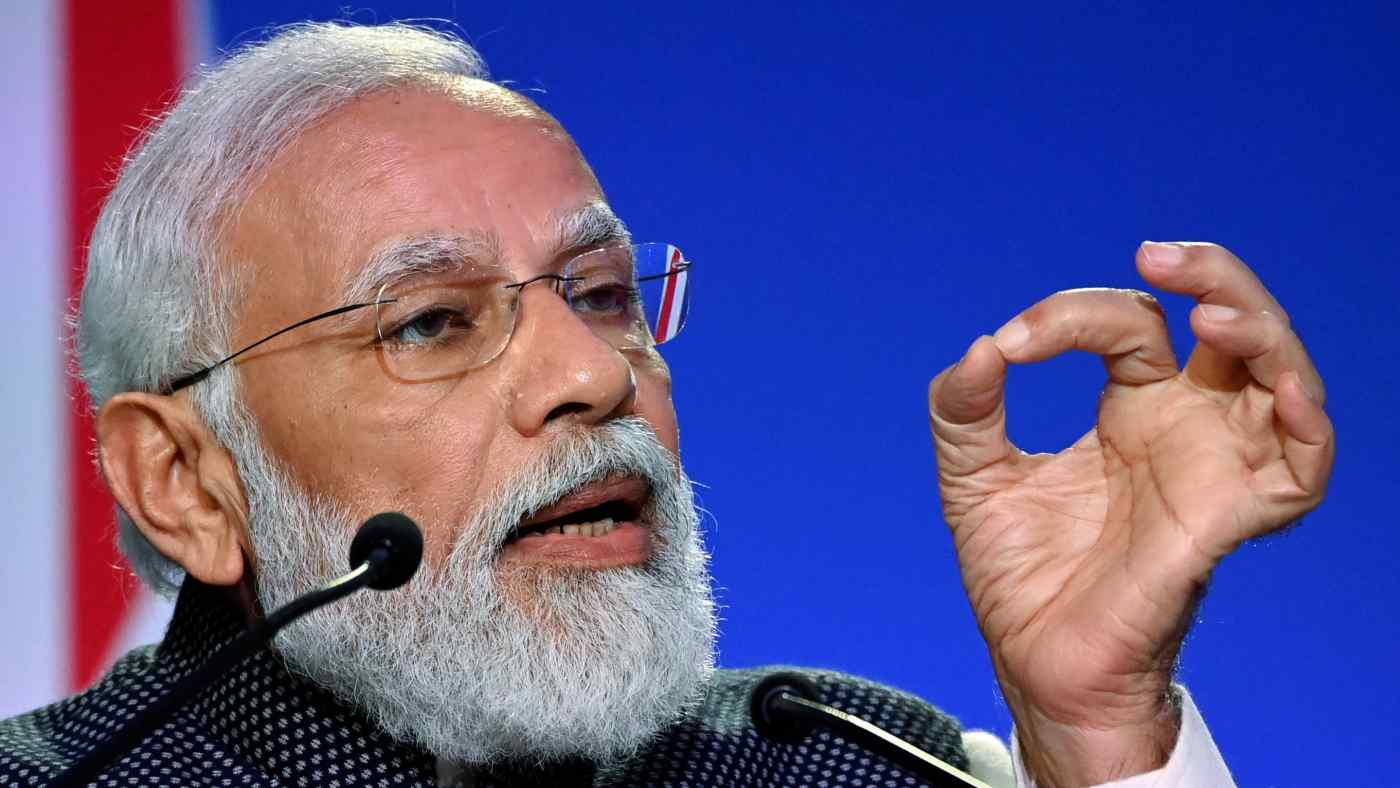 Narendra Modi delivers a speech at COP26 in Glasgow on Nov. 2: India's declaration of 2070 as the net-zero target year is both cautious and optimistic.   © Reuters
CopyCopied

Nandakumar Janardhanan is research manager for climate and energy, and South Asia regional coordinator at the Institute for Global Environmental Strategies (IGES), Japan.

Being the third-largest CO2 emitter in the world, India has finally joined the global push toward net-zero.

In Glasgow for the 26th U.N. Climate Change Conference of the Parties, known as COP26, India's Prime Minister Narendra Modi announced that the country aims to achieve net-zero greenhouse gas emissions by 2070.

The announcement was part of his five-point statement, which he termed as Panchamrit, a sacred dish of five ingredients prepared as an offering to the gods, as per Indian beliefs.

These included a commitment to raise the non-fossil fuel share in India's energy mix, higher targets for renewable energy, reducing total projected carbon emissions, reducing the carbon component of gross domestic product and the 2070 net-zero target year, which is the culmination of several political and economic considerations.

The first and foremost element that drove India toward declaring a net-zero target is its desire to play a leadership role among the world's developing countries. The demands Modi made during his speech for raising climate finance from the developed world to $1 trillion, as well as tracking its progress, have strengthened the voices of developing countries at COP26.

Third, under the Modi administration, India has been an active player when it comes to climate mitigation and the development of clean energy alternatives. With its target of achieving 450 gigawatts of installed capacity by 2030, India now has one of the largest renewable energy development programs in Asia.

By 2016, the country had already achieved 24% of emission intensity reduction of GDP out of the planned 33% reduction target set out in the 2015 Paris Agreement. Progress like this on the domestic front gave enough confidence to India's policymaking machinery to pursue a net-zero target.

Declaring net-zero by 2070 has put an end to speculation about whether India would or would not adopt such a target. But while that is decades later than the target set by other large greenhouse gas emitters, there are several important arguments as to why this is so.

First, it is true that India has made remarkable strides in renewable energy, which could substantially reduce its future reliance on fossil fuels, but coal will continue to have the lion's share of the primary energy supply. Moreover, an immediate shift away from coal is difficult as over 3.6 million jobs are tied up in the sector. That means a just and credible transition is needed to reemploy India's coal-dependent labor force and minimize any sociopolitical hurdles. Coal workers travel on the back of their lorry in Barsana in June 2017: an immediate shift away from coal is difficult as over 3.6 million jobs are tied up in the sector.   © Reuters

Second, India has faced catastrophic damage to human health and its economy in the wake of the COVID-19 pandemic. With energy demand set to bounce back to pre-pandemic levels as the country recovers, tight timelines to reach net-zero would have adversely impacted India's economy.

Third, some Indian states are highly dependent on revenues from the fossil sector. A midcentury target would have again put an overly significant burden on the national government, as well as the respective state governments, in crafting and implementing policies to navigate away from the fossil fuel economy.

Fourth, a lack of technological availability limits India's efforts toward decarbonizing its energy sector. The country has been heavily dependent on the overseas supply chain for the development of the renewable energy sector. Until early 2020, roughly 80% of solar panels used in India were imported directly or indirectly from China.

Similarly, in order to decarbonize its industrial and transportation sectors, a lack of affordable technology remains a major challenge. Without securing adequate financial and technological support from the developed world, fast-tracking toward a net-zero pathway would be a critical challenge.

Fifth, from an energy security perspective, an uninterrupted supply of petroleum is critical to maintaining efficient military prowess.

Though India has a huge renewable energy program, most of these supplies are directed toward nonmilitary sectors. The need for maintaining its huge military infrastructure, machinery and the movement and deployment of its forces along its geopolitically sensitive borders make India's defense sector a major energy consumer. This is one of the critical trade-offs the country is aware of as it plans to minimize dependency on conventional fuels in the backdrop of its new net-zero target.

India's declaration of 2070 as the net-zero target year is both cautious and optimistic. The recent coal crisis and the expected post-pandemic surge in energy demand have played a pivotal role in India taking this a crucial step toward the declaration.

On the other hand, declaring the timeline roughly half a century later gives ample time for the country to design a conducive environment for a net-zero pathway. As all major emitters are now under the net-zero target, a bigger debate in the time ahead will focus on two specific points stressed by Modi.

First, how to raise the $1 trillion climate finance by developed nations. Second, tracking its progress and pressuring those who would do make good on their promises. These issues will remain pivotal as the world fast tracks toward net-zero global greenhouse emissions.