Will Myanmar's generals be able to keep the lights on? Myanmar's biggest Yangon still suffers regular power cuts of up to six hours a day, mainly because of the increased demand for electricity following the opening up of the economy after the 2015 elections.   © Reuters
CopyCopied

Myanmar's return to military rule has revived chilling memories of the past.

As a senior member of the ousted National League for Democracy noted recently, the latest military takeover is indeed a dark moment in the country's history. But while his choice of words referred to the political situation, it reminded me of the actual darkness that used to haunt Yangon after sundown under the previous military regime.

The uniformed men who ruled for almost 50 years might have been good at holding on to power, but not so good at delivering it to people's homes. Measured in terms of unrealized economic potential, power cuts have cost Myanmar decades.

Those students who rose in revolt against military rule in 1988 disliked reading books under dim oil lamps as much as they loathed authoritarian rule. So do the protesters who are resisting the junta today. A foretaste of what is to come occurred on March 5 when the national power grid snapped, cutting electricity to major cities across Myanmar.

As economic activity gathered pace, so did consumption. The gap between demand and supply became so wide that in 2019 the NLD government approved five emergency gas-to-power plants to cover the shortfall.

When I was last in Yangon in 2019, the city suffered power cuts of up to six hours a day. Keen to avoid a backlash from voters, Aung San Suu Kyi's government allocated more cash toward energy than it did for national defense. This may have been a knee-jerk response, but Myanmar's power deficit has become a serious drag on growth. Before it was booted out, the NLD government approved more than $21 billion worth of foreign direct investment in the power sector.

Private generators were rare when I first arrived in Yangon around 10 years ago. With most shop owners forced to bring down the shutters after dark and cease trading.

But after Myanmar opened up to foreign investment following the 2015 elections, Yangon became a very different place. Gold-tinted pagodas glittered at night as residents enjoyed street food under bright lights. Powering this turnaround was the diesel generator -- still expensive, but now commonplace.

Myanmar's current generating capacity is somewhere 2.5 and 3.1 gigawatts, but peak demand is expected to reach 8.6 GW within the next five years. Adding 5 GW will not come cheap, with the total price tag estimated at $650 billion, of which $170 billion may have to come from the private sector. Had Myanmar's military leaders not intervened in the country's democratic development, Myanmar probably would have been able to secure such investment.

After all, a 225 megawatt gas-fired power plant built by Sembcorp of Singapore in Myingyan commenced operations in 2017, and contracts for five new gas-to-power projects have since been awarded, adding more than 1000 MW of additional generating capacity, with a sharp price hike helping to improve the fiscal position of most power utilities. 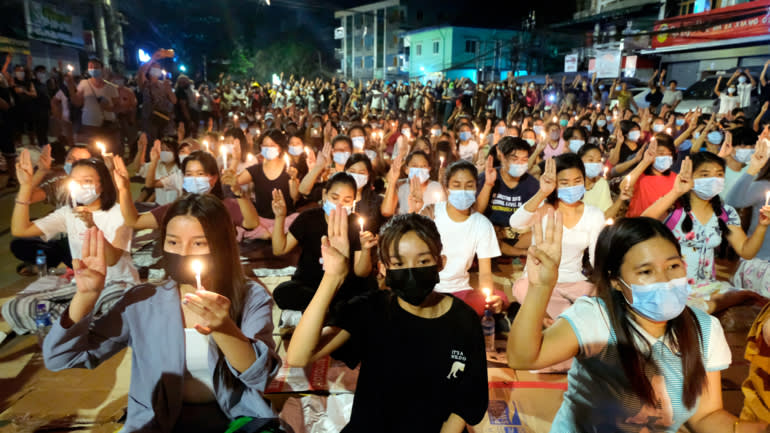 One Thai company had also started work on Myanmar's first commercial solar plant. Built on 340 hectares in the Magway region, the 170 MW Minbu Solar Power Plant is said to be the largest solar power plant of its kind in Southeast Asia.

But with the threat of sanctions looming, it is hard to see how coup leader Gen. Min Aung Hlaing will be able to resolve the widening power crisis. His power grab has put the Japan International Cooperation Agency-backed National Electrification Plan, which aims for universal electrification by 2030, in jeopardy.

More than 20% of JICA's loan portfolio to Myanmar currently goes to the power sector. This includes financing for two ongoing power and transmission projects worth $1.5 billion, and three future gas and hydropower stations. Although Tokyo has not taken a tough stand against the military regime publicly, what will happen to its financial commitments to the power sector in Myanmar is anybody's guess.

As pressure mounts on the army to relinquish control, foreign investors are getting cold feet. Japanese beer maker Kirin terminated a joint venture it had with a conglomerate linked with the military soon after the coup. Toyota has delayed the start of an assembly plant in the Thilawa Special Economic Zone -- a hub for Japanese investors in Myanmar.

But while investors can choose to pack up and leave, Myanmar's people have to live with the consequences of the junta's reckless actions. Reliable, affordable power needs investment. Without electricity, economic development and social mobility will stall. It is electricity that allows Myanmar's street vendors to operate longer, its garment factories to stay competitive, and its students to study late into the night.

Those protesting the military coup are not only worried about losing their freedom, but they also fear slipping back into darkness -- literally.