Coronavirus shock should compel governments to bring them into formal sector Workers at a dhaba during lockdown in Chandigarh, pictured on May 15: brisk streetside commerce has all but disappeared.   © Hindustan Times/Getty Images
CopyCopied

In places where I often travel, or rather used to before the pandemic struck, a small ramshackle kiosk offering snacks, bottled water and mobile phone top-ups is as good a barometer of economic health as any. Where data is unreliable, it can provide an accurate pulse of the market.

These makeshift tin-roof roadside establishments -- which make vital economic contributions, despite their flimsiness -- are ubiquitous in the developing world, but now their future is uncertain. As coronavirus has pummeled emerging markets, it is this informal economy which is going to suffer most.

The informal economy, put simply, is all commercial activity not covered by formal arrangements in law or practice. It is the part of the economy that is often missing from official records but supports the livelihoods of 2 billion people and their families across the world. In the Asia-Pacific region, that accounts for nearly 60% of non-farm employment.

All those impressive growth figures that hedge fund managers quote when "selling" developing economies come out of the sweat, toil and initiative of those working in the informal economy.

Take India, where a highway dhaba, or eatery, serves hot naan and curry to the tired and hungry lorry driver. It may once have been nothing but a patch of clearing where a vendor decided to park his fruit-cart in the hope of selling his produce. Over time, the money he made from passersby allowed him to sell more than just fruit.

When business improved he hired his nephew and constructed a kiosk. Very soon that kiosk turned into a thriving business employing a dozen others. But now this economy is in trouble. With full or partial lockdowns still in place, brisk streetside commerce has all but disappeared.

The International Labor Organization says 1.6 billion workers in the informal economy are in imminent danger of seeing their livelihoods end as a result of COVID-19. In India, where almost 90% of the workforce is engaged in the informal sector, that danger has unfolded into a living nightmare. The plight of migrant workers leaving cities carrying their children on shoulders has brought home the tragedy of not making the informal economy formal. 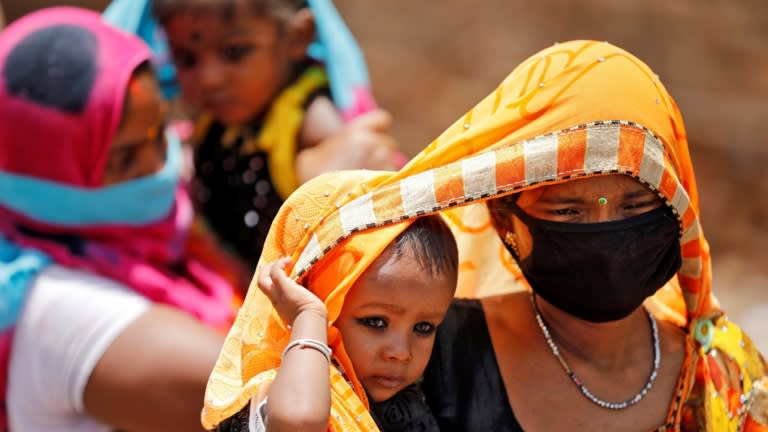 Migrant workers cover their children with saris to protect them from heat as they wait to get on a bus during lockdown in Ahmedabad on May 20.   © Reuters

COVID-19 has inflicted damage on the formal sector too, but the devastation brought on those who make a living in the shadows of shiny glass towers has been much worse than on those who work in them.

Some of those roadside eateries I illustrated earlier may have to shut for good: no stimulus can compensate for the permanent loss of customers. As emerging markets come out of lockdowns, informal establishments may find it harder to reopen.

The men that dhaba operator once hired may not return to work. Even if they do, the demand may have all but disappeared. New rules on hygiene and distancing could come into force. Petty corruption could soon follow. The list of problems is endless.

The pandemic has served as a wake-up call about the urgency of building social protection. For emerging markets, that means bringing more of the workforce into the formal economy. Reducing barriers which stop small businesses acquiring legitimacy would be a step in the right direction, for example by making it easier for people to start small businesses, acquire a business license and get utility connections. Giving a digital identity to every citizen would help too.

When someone works for a legitimate company, filing taxes, he or she is entitled to some benefits. It could be, for example, a minimum wage guarantee or maternity leave. Registering employees with their national ID could make social protection portable. A formal establishment often provides better working conditions. Banks are more willing to extend mortgage finance to a salaried chef than, say, a daily wage cook.

In times of cutbacks, a severance package is a cushion for the worker in the formal sector to fall upon. His counterpart in the informal economy has no such option.

For now, governments are taking emergency action to mitigate the problem. India has made direct cash transfers into the personal accounts of informal workers, while Indonesia has increased utility subsidies for poor households. Malaysia has introduced special grants for small enterprises hiring fewer than five workers and the Philippines has put its informal labor force to work in support of basic medical services.

Such measures are only temporary. Make-work programs, subsidies and handouts may stave off hunger momentarily but will not prevent millions slipping further into poverty. To make a workforce more resilient to shocks, what is required is the transition of the informal economy to the formal one. If nothing else, it could end the state of indignity that millions have endured silently for so long.