Governments should focus on raising productivity, not on specter of deflation Japan need, somehow, to increase the workforce and their productivity. (Photo by Hirofumi Yamamoto)
CopyCopied

Through 2019, central banks in major developed economies have changed their monetary policy stance toward greater easing, even if it is premature to say that a full-scale monetary easing cycle has started.

In September alone, both the European Central Bank and the Federal Reserve moved: the ECB lowered the interest rate it pays banks on their overnight deposits to minus 0.5% and decided to resume bond purchases, while the Fed cut its rate by 25 basis points, following a cut of the same size in July.

What the ECB is now facing is very similar to what the Bank of Japan has faced over the decades: anemic growth, low inflation and perpetually low interest rates. Nowadays, we hear of the "Japanification" of Europe.

But I am puzzled by the spread of this Japanification. Have Western economists and policymakers not learned the lessons for avoiding it from Japan's own experience? My reading is not that the ECB was too timid in implementing the alleged lessons it drew from Japan -- that aggressive monetary easing was needed -- but that the lessons were wrong.

Western experts attributed "the lost decades of Japanese economy" since the bubble burst in the early 1990s to a lack of boldness of monetary policy, and central bankers took note.

Economics professor Alan Blinder said in 2005 that Alan Greenspan, chair of the Fed from 1987 to 2006, "was determined not to allow the Fed to follow the Bank of Japan into the zero-nominal interest-rate trap," where the central bank has no more room to cut rates to stimulate the economy.

Blinder was confident about the efficacy of "mop[ping] up after" a bubble has burst and said: "Large injections of central bank liquidity seem to work pretty well."

Given that these arguments were almost the consensus among policymakers, we could explain Japanification everywhere by saying that the countries in question did not actually implement in earnest what they were supposed to.

But I am skeptical about this interpretation, given the massive expansion of central bank balance sheets and the long duration of aggressive monetary easing since the global financial crisis started in 2007.

Aggressive monetary policy has led to perpetually low interest rates because of the very mechanism of monetary easing itself. Its effectiveness derives from bringing forward future demand of private economic agents to the present. If the economy is faced with a temporary shortfall in demand, this policy works.

But if the weak economy is not caused simply by the lack of demand -- if there are bigger structural issues suppressing it -- the very act of monetary easing will make the "natural rate of interest" fall faster, and eventually it will get stuck.

What is crucial is the correct diagnosis of the fundamental cause of low growth. Was the problem facing Japan over the decades a temporary demand shock? The answer is clearly no. The challenge was how to boost the potential growth rate when you have a rapidly aging population and fast-advancing technology and globalization.

You need, somehow, to increase the workforce and their productivity. These problems could not be solved by just shifting the timing of expenditure. You can only front-load or buy time to a certain extent. This should have been a lesson we came to learn from Japanese monetary policy experience.

What is worse is that prolonged monetary easing tends to lower productivity growth by keeping inefficient businesses alive. In essence, Japanification is the logical consequence of the wrong application of mainstream macroeconomics.

Interestingly, economists and some policymakers are now calling for the more active use of fiscal policy -- that is, through government expenditure rather than further monetary easing. This is an irony, since its effectiveness also derives from the front-loading of future demand.

The difference with monetary easing is that fiscal front-loading is more direct and the resulting debt increase is mainly a public one, rather than in the private sector.

However, regardless of which macroeconomic policy is deployed, how much you can front-load future demand is ultimately constrained by how much you can grow. Some may rationalize active fiscal policy by arguing that, this time, government expenditure should be productive. Can we believe this rosy story?

I have to pose one more question. Was Japanese performance really that poor? Actually, the Japanese economy was relatively good compared with other developed economies, if we adjust for the impact of demographic change, which in Japan is an aging and declining population.

In terms of Japan's social stability, which is an essential basis for sustainable growth, the situation looks less worrying, partly because we do not observe extreme income and wealth inequality here. For better or worse, this may reflect how Japan has managed its post-bubble economy.

Unfortunately, mistaken lessons concluded deflation was the most important challenge, rather than anything else, and Japan was slow in addressing the issue of raising productivity. If we are to talk of Japanification, it is this phenomenon that is worthy of its name. Sadly, we are now observing it outside Japan. 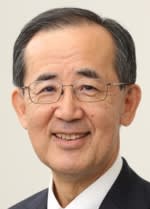